We’ll have Manhattan / The Bronx and Staten Island too / We’ll try to cross Fifth Avenue. 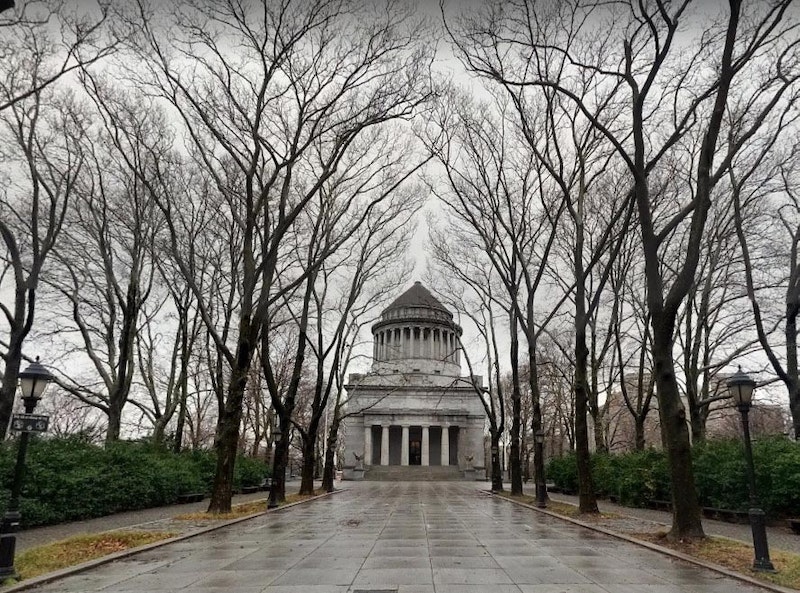 The last resting place of the 18th President, Ulysses S. Grant, and his wife Julia on Riverside Dr. on the Upper West Side has been the subject of NYC’s silliest riddle over the years. The correct answer is that nobody is buried under the monument… Grant and his wife are, however, entombed here and are not six feet under. (That’s why it’s Grant’s Tomb, not Grant’s Grave.) But if you take a short walk up Riverside Dr., you will find a grave here. 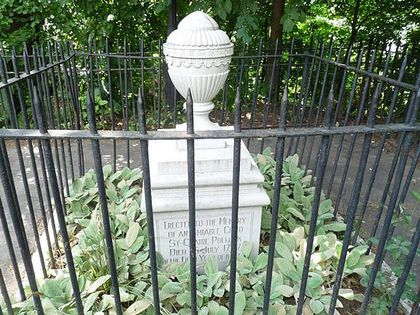 It’s a small monument surrounded by an iron fence. The story goes that St. Clair Pollock was playing on the rocks overlooking the Hudson River on the Pollock property, and fell to his death on July 15, 1797. He was just five years old. When the Pollocks later sold the property, his father (perhaps his uncle; records are unclear) made the request that St. Clair’s grave, which was on the property, would always be respected. A small stone urn is marked, “Erected to the memory of an amiable child.” St. Clair is also commemorated with the very short St. Clair Pl., that runs between the Hudson River and W. 125th St. under the Riverside Drive Viaduct, about a half mile to the north. 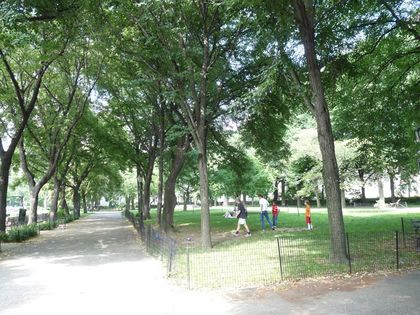 While Grant’s Tomb and Riverside Church get all the tourist attention along Riverside Dr. at W. 122nd St., this small park featuring cherry trees reflects a friendship the USA had with the nation of Japan early in the 20th Century that was severed by the attack on Pearl Harbor in 1941, but resumed after World War II. “Sakura” means “cherry blossom” in Japanese, and the Committee of Japanese Residents in New York was planning to import 2000 cherry trees to give to the city in 1909 as part of the Hudson-Fulton Celebration, which is little-remembered today, but was a large citywide celebration held from September 25th to October 9th that year on what was the 300th anniversary of Henry Hudson’s arrival in New York harbor and the 100th anniversary of Robert Fulton’s demonstration of the practicality of the steamboat; numerous parades and public celebrations were held, among them what was to be called the Parade of Ships on the Hudson River.

Tragedy occurred with that first shipment of cherry blossoms, which was lost at sea; a new shipment was brought in 1912, and many of the present cherry trees in Sakura and Riverside Parks descend from that original planting. 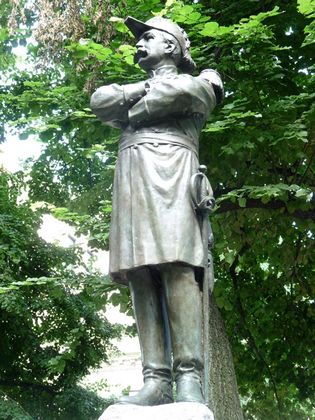 Among Sakura Park’s highlights are a stone Japanese tori, or lantern, a gift to the park by the City of Tokyo in 1960 and a common element in many Japanese gardens. Somewhat incompatibly in the otherwise Japanese-themed park is the presence of Gutzon Borglum’s statue of Major General Daniel Butterfield (1830-1901) who distinguished himself with his service at Chancellorsville, VA and at Gettysburg, PA in 1863, where he was wounded. Butterfield is perhaps best remembered as the composer of the mournful “Taps.” Borglum went on the sculpt the massive Presidential likenesses at Mount Rushmore. 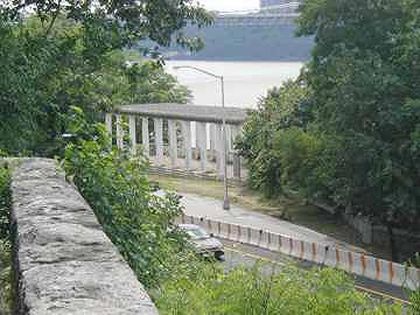 Richard Rodgers and Lorenz Hart’s “Manhattan,” written in 1925, works as a travelogue of the five boroughs. But since it was written over seven decades ago, some of the landmarks mentioned have modern-day listeners scratching their heads and reaching for their NYC guidebooks!

We’ll have Manhattan,
The Bronx and Staten Island too,
We’ll try to cross Fifth Avenue.

As black as onyx
We’ll find the Bronix Park Express,
Our Flatbush flat, I guess,
Will be a great success,
More or less.

A short vacation
On Inspiration Point we’ll spend,
And in the station house we’ll end.

But Civic Virtue cannot destroy
The dreams of a girl and boy —
We’ll turn Manhattan
Into an isle of joy!

Inspiration Point? Civic Virtue? What could Rodgers and Hart been referring to?

Inspiration Point, a sightseeing and romantic mecca in its early days, was built in 1924. The site of a natural rocky outcropping in the Hudson River, it got its Greek temple shelter that year, and it undoubtedly inspired the song lyric.

The park is near the beautiful Castle Village complex, which replaced Paterno Castle in the late-1930s. 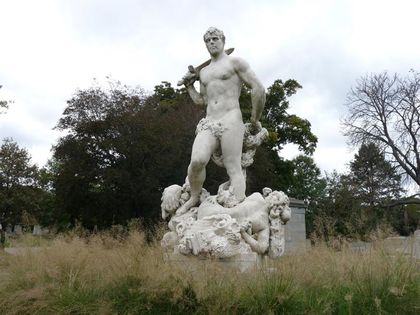 “Civic Virtue,” called “Fat Boy” by his detractors, was designed by renowned sculptor Frederick MacMonnies and worked on by the famed Piccirilli Brothers of the Bronx, who also sculpted Abraham Lincoln at the Henry Bacon Lincoln Memorial in Washington as well as the two lions, Patience and Fortitude, who guard the NY Public Library at 5th Ave. and 42nd St. “Civic Virtue” was installed in 1922 directly in front of City Hall. It immediately came under fire from many women, who were angered that the youth portraying “Civic Virtue” was demonstrating his triumph by lording it over two female figures, depicted as sea sirens. For 19 years, the city leadership regretted having him around, especially Fiorello LaGuardia, who apparently despised being mooned by Civic Virtue daily. The Little Flower had the statue shipped off to the remote wilds of Queens at Queens Blvd. and Union Turnpike when Queens built a new Borough Hall there in 1941.

In 2012 Civic Virtue again came under fire from Queens Borough President Helen Marshall and, ironically as it turned out, US Rep. Anthony Weiner; finally, he was removed from his Queens pedestal and shipped off to a relatively remote area inside Green-Wood, where he was partially restored the following year with a combination of city and Green-Wood funds.