Great Wealth is Evil, But So is the U.S. Government 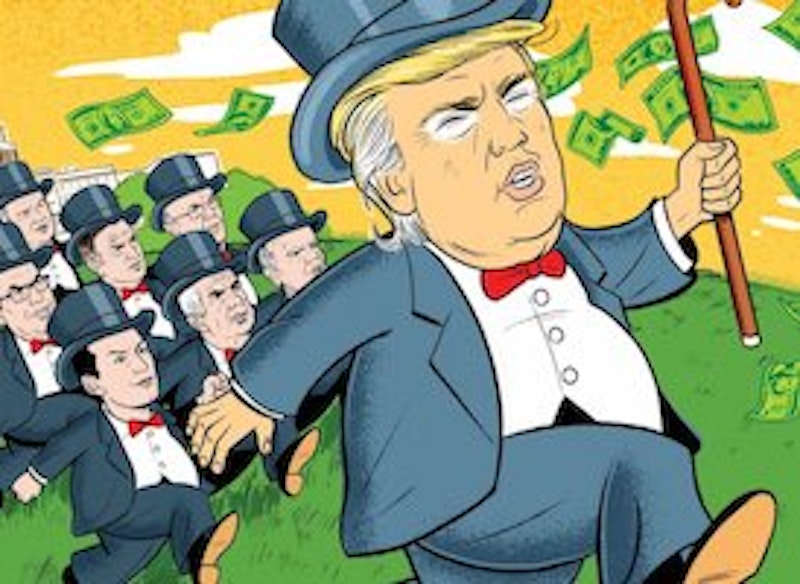 How nice to see mainstream presidential candidates like Elizabeth Warren and Bernie Sanders calling for the confiscatory taxation of billionaires’ wealth. No polity can be healthy given the presence within it not only of extreme polarities of wealth—but of extreme wealth itself. The sickness of our own socio-economic system is a function of, among other things, the fact that it has recently abetted the proliferation of oligarchic fortunes.

I wonder, however, why there haven’t arisen politicians associated with the “new” right who are willing to co-opt Warren’s and Sanders’ anti-oligarch platforms. There are, to be sure, new right thinkers who are articulating the position that extreme wealth is politically dangerous and morally dubious. And the occasional Josh Hawley pops up, occasionally ready to criticize capital, that fetishized idol of Reaganite conservatism. But if there’s a new right politician espousing a politics that’s bracingly and unapologetically opposed to the global corporations and to that protean monster we call “neoliberalism,” his name has escaped the attention of this particular Hoosier. What I have in mind is, for lack of a better example, something like a homegrown, all-American version of Marion Maréchal Le Pen.

It’s a telling sign of American political culture’s inadequacy in meeting the needs of the moment that the closest thing we have to such a figure on a national scale is Trump. Yes, it was the Queens pimp himself in all his vulgar glory who grunted out expressions of hostility towards the speculators of Wall Street during his presidential campaign. Those grunts are by now mostly forgotten, as the pimp has proven himself in office an obedient servant of the very speculators he used to mock, but the fact that they did their part in powering his victory testifies to the existence here of a strong electoral issue, one that a clever politician should be able to exploit. As I’m not the first to point out, it’s a combination of cultural conservatism and aggressive anti-corporatism that will represent the magic political formula in the post-liberal U.S.; and the constituency sympathetic to this new fusion will increasingly represent the “broad center” of the American electorate.

And yet there’s a hitch, one that could, and maybe should, doom any anti-oligarchic enterprise here in the United States. That hitch is this: That it’s doubtful whether the government is capable of doing anything better with the oligarchs’ money than they are.

What would the government do with the billions of dollars of which it might relieve, say, George Soros? Soros would find himself with lighter pockets as he attempted to subvert the democratic will in Hungary; fund propaganda campaign to promulgate Gomorrahn/cosmopolite values in Poland; undermine Brexit; put the finishing touches on the brutalization of the indigenous population of Palestine; and support CIA-instigated Nazi coups against democratically elected governments in Ukraine.

On the other hand—and this is the key point—the U.S. government would itself use his money to pull off exactly the same things.

And worse things. Soros, after all, doesn’t quite have it in him to militarily destroy another Middle East country, murdering a quarter million of its inhabitants and sending millions more of them scurrying from the rubble towards any European port that will allow them to land.

This whole seize-the-oligarchs’-wealth fantasy provides a certain measure of emotional satisfaction, but under the circumstances as they now exist, it doesn’t make enough sense. Given the propensity for evil mischief, given the sheer, Satanic corruption, of the American governing apparatus, it’s not at all clear to me that the fortunes of the Gates and Bezoses and Soroses and Bloombergs and Zuckermans aren’t for the time being marginally better off in their own greasy, conniving little hands.

Fixing that government apparatus so that it’s sane and healthy, and can be trusted to do what’s right—such is the necessary project that looms before us right-wingers before we move on to seize the wealth of the thugs, usurers, monopolists, and other malefactors of globalized capitalism.

Or rather, that project stands before younger right-wingers. It’s the work of a generation, and my fellow Boomers and I won’t live to see the triumphant fruits of it.

The great Orthodox Nativity Fast begins on November 28—which is also Thanksgiving Day for us American converts to the Russian church.

The date’s snuck up on me, so I haven’t thought much of how we American Orthodox will handle the fact that the Fast begins on the same day on which falls our great secular American feast. I suppose we’ll “cheat,” starting our Russian fast right after our American feast—but I’ll of course discuss with Father Nicodemus how to proceed. I wouldn’t want to make a mistake!

I welcome suggestions from my American co-religionists about how they plan to cope with this accident of the calendar.