Brits whine about Americanisms while butchering the English language themselves. 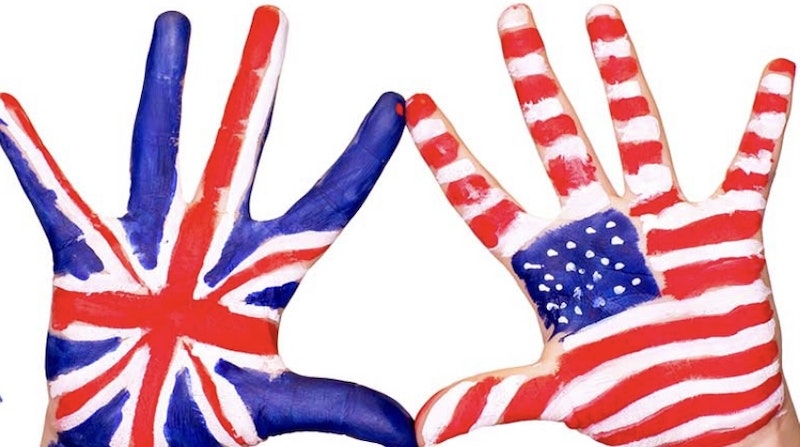 Journalist Ed Cummings started a recent Twitter conversation asking his fellow Brits to name the "worst Americanism." Although there were a few potshots at American behavior, the conversation that ensued focused mainly on the aspects of American English that annoy British people. I have a list of Britishisms that bug me (e.g. calling "math" "maths," "fillet—pronounced fillit—a fish) but until reading this I hadn't given any thought to the possibility that the way we talk can get on their nerves too.

Cummings added that he wasn't going to entertain the argument that many Americanisms are former Britishisms that have fallen into disuse, but it happens to be true. Bill Bryson wrote a whole book—Made In America—providing a detailed analysis of how language has evolved in the United States over the last couple of hundred years. We no longer keep up with British English because we're not forced to.

Humphrey Plugg brought up one of my pet peeves about British English: "I always find it weird when Americans refer to bands as a single entity—Metallica IS touring Europe etc.—like they’re one multi-headed monster roaming the land for arena venues." Maybe Americans refer to a band as a single entity because it is a single entity, thus "one band, two bands, three bands," etc. However, if the name of the band is plural—e.g. the Rolling Stones—I'd say, "The Stones are touring Europe," just like the British would. In general, American English considers many nouns that the British consider plural to be singular. One Twitter pedant explained that they consider a team to be plural because in the UK they're an integral part of the community so it's a collective thing, unlike in the US where teams move freely from city to city. When I told him that it's rare for an American sports team to relocate to another city, he told me I had no idea what I was talking about.

Sometimes, Brits make keen observations on the great language divide. A bunch in this Twitter discussion expressed their distaste for Americans saying, "I could care less" to mean "I don't care," which is understandable since this expression requires "couldn't" to express the intended meeting. This, however, isn't an Americanism in the sense that saying "elevator" instead of "lift" is. Rather it's idiomatic English used by some, and there's no requirement for idioms to adhere to anyone's logic. Any Brit using the phrase "head over heels" isn't making literal sense either.

Another phrase that gets on many British nerves is "reach out" used to mean "contact someone. That expression, as used in the great Four Tops' song, "Reach Out (I'll Be There)," indicates that someone's in need, but not in need of planning the company picnic—they're vulnerable and need help. The relatively new way of using "reach out" (which I trace back to the old TV show, NYPD Blue) sounds ridiculous.

One said he hates just about everything about the way Americans talk, but he was right on the money in expressing his disdain with American professional golf fans yelling, "Get in the hole" after a shot. These have to be the most annoying sports fans in the world. The pandemic has made watching golf on TV more enjoyable because the frat-boy fan element has been removed.

The American pronunciation of "herb," with its dropped "h" irks many Brits. They're the ones who added the "h" sound to a French word just because they need to pronounce every consonant, at least when they're not swallowing their consonants—check out Ricky Gervais' pronunciation of "talented" (and categories: ca'agories) at last year's Golden Globe Awards show.

Our "oregano" induces apoplexy in some too, but at least we pronounce it close to the way it's pronounced in Spanish, whereas there's no equivalent for the UK's "OH ray GAH no" in another language. Accenting the first syllable of a four-syllable word sounds awkward. The humorless woman on Twitter who took offense at the American pronunciation of Notre Dame should do some research on her own country's weird pronunciations.

"Eggplant" is problematic for some of our pricklier UK friends, but that came from 17th- and 18th-century Europe when that vegetable (it's technically a berry) had the shape and color of goose eggs. It's a logical word, and at least we have our own unique word that we didn't steal from the French, like the Brits did with aubergine.

There were a few gripes I couldn't decipher. Ed Cummings offered only "tan"—tan what? One guy added the cryptic "dipping sauce, cringe central." What are you supposed to call a sauce that's for dipping something into? To quiet him down, I sent him a link to a British website that had a recipe for a "dipping sauce," even though that rarely works with Twitter know-it-alls.

The biggest revelation I got is that many UK citizens are incensed when an American says "Can I get?" instead of "May I have?" "Get it yourself, and say please," said one irate word cop. This type of discussion should be lighthearted and fun, but Britsget on their high horses over what they consider their own proprietary language.