Scene of the Grymes in Staten Island 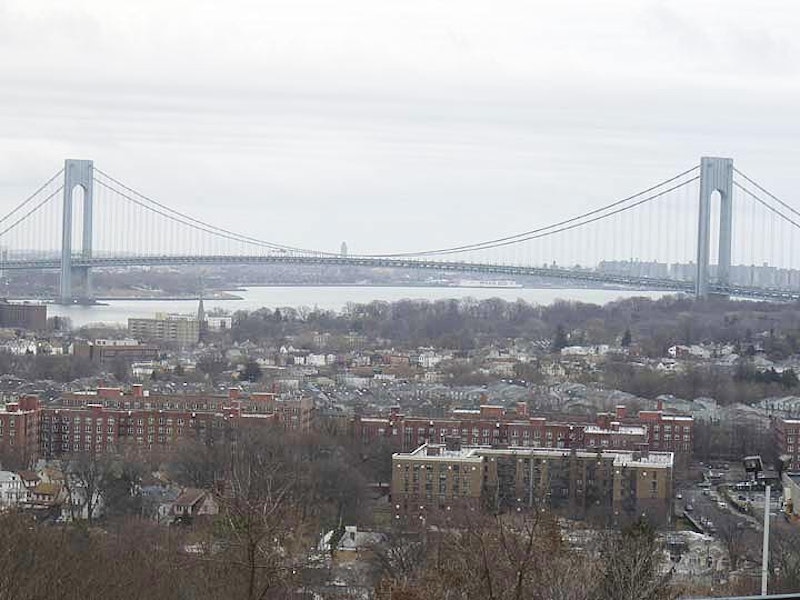 I took the ferry across Upper New York Bay to Staten Island and walked a few miles from the ferry to Clove Lakes Park. I was keen on walking for some distance on Victory Blvd.—I’d walked its western end in Travis in 2006 and again in 2015, but hadn’t walked for any distance on its eastern stretch near the ferry, which has some relics worth noting, and some unsuspected surprises. I eventually found my way to Grymes Hill and then to Clove Lakes Park.

Grymes Hill is easily glimpsed from the Stapleton Staten Island Railway station, looming over Staten Island’s north shore communities. Grymes, along with Wards, Emerson, Todt, and other mid-island hills, are the legacy of a glacier that reached its southernmost limit and provides New York City with its only mountainous areas: the hills are the highest on the east coast south of Maine, and from their summits can be glimpsed both the towers of Manhattan and the Watchung Mountains in Northwest New Jersey. Vistas are precious and few, though; many of these hills are occupied by private estates. Grymes Hill itself is named for the widow of the first governor of Louisiana, Suzette Grymes, whose mansion, Capo di Monte, was one of the first in the area.

Another prominent mansion was built by Major George Howard (Howard Ave., skirting the hill, bears his name) between 1830 and 1836. The region was home to prominent families: cruise shipping founder Edward Cunard’s mansion is now a part of the Wagner College campus and boasts a magnificent view of Manhattan visible from Howard Ave.; and the ever-present Vanderbilts, who also owned estates on the hill. Both Grymes Hill and Clove Lakes Park were part of a 5100-acre tract granted to New York Gov. Thomas Dongan (1634-1715) in 1687 and later passed to his heirs, who sold off the property in bits and pieces. 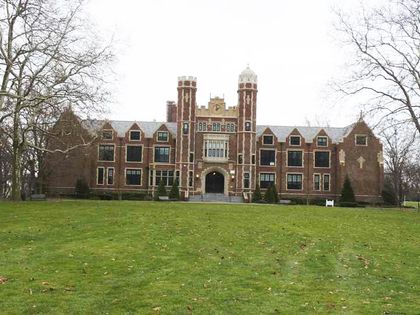 This was my first visit to the Wagner College campus in Grymes Hill. I was familiar with the name since Wagner was in the habit of wiping out the St. Francis College Terriers in basketball and I was aware that they are on Staten Island, but that was about it. Other than a couple of cars in the parking lot, it was just the birds, squirrels and me. I strolled onto the grounds as if I worked or went to school there.

Wagner has its roots in upstate Rochester, NY, where Lutheran Pro-Seminary was founded in 1885. The Wagner family donated funds toward the campus, which provoked a name change to Wagner Memorial Lutheran College of Rochester by Justice James Angle of the NY State Supreme Court the following year. The college, whose name was streamlined to Wagner College in the 1950s as it lost its original ministerial training theme and became a general admission liberal arts school, moved here to the former Cunard property in 1918; Sir Edward Cunard’s home, constructed so he could watch his cruise ships enter New York Harbor, was incorporated into the campus as Cunard Hall. 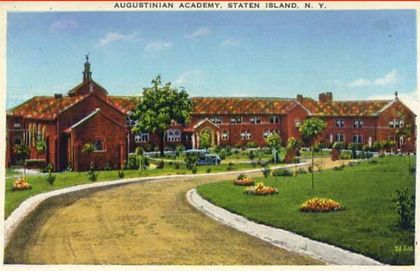 Little did I know when attending a religious getaway with my senior high school class in November 1974 at the Augustinian Retreat House, 144 Campus Road just east of Howard Ave., that a couple of decades later the building, now in ruins, would become a mecca for urban explorers and the subject of dozens of ghost stories.

The ravaged building, in its latter days hidden under a thick canopy of weeds, ailanthus and ivy, was the home of the Augustinian Academy, a Roman Catholic institution incorporated in 1870. The Society purchased this property from Erickson N. Nichols in 1922 and built a prep school here; classes were held until 1969, when it was converted to a retreat house. The Augustinians sold the property in 1985, and it had passed through many hands since, with Wagner College now owning the property.

I wandered onto Campus Rd. in the mid-1990s, just to see the place again, and was shocked to witness what a state into which it had fallen. Online urban explorers told tall tales of murders, ghosts, and levels and sublevels too deep to venture into; I saw a building where I witnessed prayer, laughter and tears, left for the elements to tear it apart. The Academy’s Celtic cross-shaped fountain and bell tower were still discernible. Now those are gone; weeds remain.

When I was a kid, as I pored through old street directories, I spotted a listing for Serpentine Rd., which the stretch of Howard Ave. between Hillside Ave. and Clove Rd. was formerly named. Back then, I assumed that “serpentine” was so named because Howard Ave. twists and turns as snakes do. Actually serpentine is a form of rock that makes up a lot of the boulders near the surface especially in northeast Staten Island. Striations and squiggles in the rock surface resemble snakes, hence the name. Minerals found in Staten Island serpentinite include talc, lizardite, chrysotile, brucite and magnetite. Prior to the Civil War, Staten Island’s serpentine was mined for iron and anthophyllite, used to manufacture asbestos tiles by the H.W. Johns Manufacturing Co., which evolved into the Johns Manville Corporation. 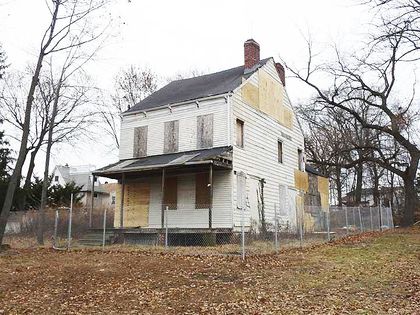 The John King Vanderbilt House, 1197 Clove Rd., just north of Victory, appears not long for the world, though its ruin has been resilient. It dates to 1836 and is worth a visit to see how even the greatest can be brought low. It was originally a country farmhouse owned by a scion of the railroading magnate family and was subsequently owned and restored by relative Dorothy Valentine Smith, who wrote several historical books about Staten Island and helped found the Historic Richmond Town collection of historic buildings. Her house, in better shape, can be found on nearby Waldron Court. 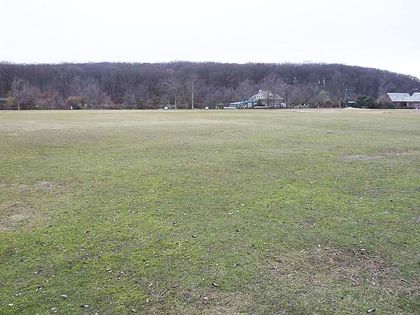 In my early years, a frequent destination was Clove Lakes Park, originally the last stop of the R-7 from Bay Ridge, on Victory Blvd. and Clove Rd.. When the R-7 became the S-53, the line was extended to Port Richmond, then a bustling shopping area on the north shore that suffered once the Staten Island Mall was built in the 1970s.

It was Clove Lakes Park that my knack for exploration took its first root. One summer afternoon in 1965, my parents and I bundled off for a picnic at Clove Lakes when I got bored and decided to strike off on my own, heading up and down the park paths in the deep woods. Clove Lakes Park is 198 acres, and exploring it takes awhile. I was able to cover a lot of ground and lost track of the time and the whereabouts of my parents. An hour or two later, a park ranger and my old man, both riding one of the Parks Department buggies, found me. I’d lost a shoe. I’ve obliterated it from my mind, but the old man always said that was the one and only time he gave me a whompin’. I recall that I was dreading my mother’s reaction as we rode the bus back home, because she was the real yeller in the family, but instead, she merely said I had received sufficient punishment.

But the course was set. I began exploring Queens and Brooklyn by bicycle in a few years, making mental notes where the “good stuff” was, and then began walking the city by foot with my camera. 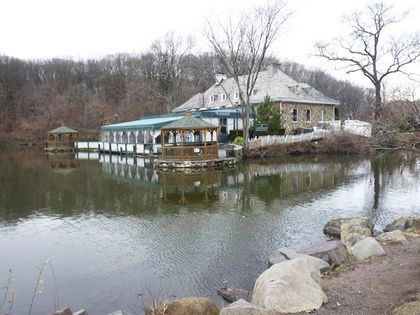 Of all Staten Island’s green spaces Cloves Lake Park, along with Silver Lake Park to the east, is the most developed and most closely resembles landscaped Central and Prospect Parks; it’s dominated by picturesque bridges, winding walkways, close-cropped grass and artificial brooks. Rent a boat or a horse, and traverse its ponds and bridle paths.

The brook that wanders through the park, Clove Brook, is a tributary of Palmer’s Run, which eventually empties into the Kill Van Kull. Beginning in 1825 by miller Abraham Britton, it was dammed into a series of ponds, Brooks Lake, Martling’s Pond (aka Richmond Pond), and Clove Lake. Where the brook meets the ponds, you’ll see a succession of picturesque waterfalls, the only ones on the island. The dams were originally built by 17th-century New York Gov. Thomas Dongan; the resulting water pressure was used by local mills to grind grain and saw wood. Ice was also harvested in the ponds, when winters were colder. 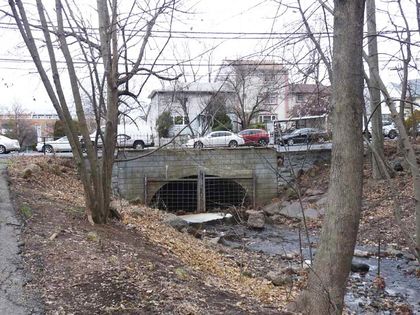 Here Clove Brook drops underground under Forest Ave., resurfacing at Palmer’s run in Port Richmond, where it empties into the Kill Van Kull. With light failing at 3:30 p.m., time to kick it in the head and catch the S48 to the ferry; the ferry to the #1 train; the #1 train to Penn Station and the Long Island Railroad to Little Neck.