Writers are terminally unsatisfied with their output. 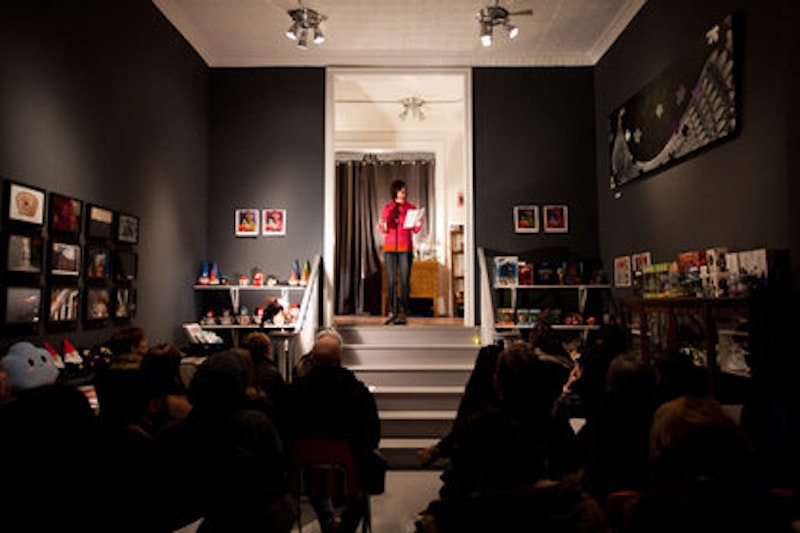 Recently, I resolved to attend more lit readings. What I didn’t realize is that such proactivity can be lethal. Or almost.

A girl who lives across the hall from me subscribes to Time Out New York and never reads it. She lets it rot on the floor beneath her mailbox. “Pick me!” it squeals, every time I walk through the front door. “Give me a home and not just a shelter!” Sometimes I do, and feel a little bit guilty, before I’m reminded of all the nasty things the girl’s roommate tells me about its neglector. “I have to lock my booze in my room!” she seethes about the girl’s sticky fingers.

On a recent trip to the beach, I brought along the (borrowed) barbeque issue. As a vegetarian, I was instantly frustrated with the feature, and, in turn, eyed the listings with a more sustained glance than usual. A writer whose memoir I had recently finished was doing a reading at KGB. The theme of the night was “NYC memoirists.” His book was okay; he’s perhaps not Important enough to warrant the self-involved reflection I so desperately cling to like a dehydrated puppy at a water basin every time I cherish Patti Smith’s Just Kids, but it’s a good beach read nonetheless. I remembered that I had dog-eared several pages in his book. Not because of some brilliant passages that I could return to in moments of crisis, but because of typos. Ice tea. There is a “d,” folks. I’d go to the reading and tell him I liked his book, thought it inspiring and whatnot, but that he was in dire need of a new editor. He would find it cute. Writers like anal girls.

“I want to go to more book readings.”

I realized I had a meeting scheduled for seven o’clock the night of “NYC memoirists.” The reading went from seven to nine. My meeting was in Greenpoint. KGB is in the East Village. I’d go to a reading on another night. Maybe I’d send the Writer an email, tell him how I wished I could be there, like we were old friends and he cared.

Sprung from the meeting at 7:30 and feeling antsy, I waffled for a few minutes before biking toward the Williamsburg Bridge. Growing up in New York, it’s easy to be complacent about all that’s going on in the city at any given moment, forgoing kultcha for a night at home with one’s laptop. I’m turning over a new leaf and Taking Advantage. Despite myself.

Summer means it’s time for me to sweat out half my body weight any time I deign to summit the bridge. It had just stopped raining, and the humidity broke, but like a snoozed alarm clock, it would be up and running in no time. As I descended into Manhattan, bobbing my helmetless head to the music in my headphones, I caught a puddle, and gripped my breaks. I watched over my shoulder as my phone went sailing out of my pocket onto the ground, and I followed shortly thereafter. My bike lay two feet below. A man swerved to a stop behind me.

“I don’t know what just happened, but it looked impressive.” I wanted to slap him. “Are you alright?” “Yeah.” Surprisingly, I was telling the truth. Looking down at my legs, I had just barely broken the skin on one knee. My bare feet in their flimsy sandals were fine. Despite the fact that I skidded my side against the pavement, my shirt remained intact. It was barely dirty. Another man who was taking pictures shuffled over to help me up. “I’m good.” I laughed it off. “You sure?” “Yeah.”

I waited till they left, then gathered myself before mounting my unruly bike. I began to peddle, and my legs moved a mile a minute. I tinkered with the gears before looking down. The chain was, indeed, off. I walked the bike to the fork that separates the pedestrian lanes from the biking ones. I spent what seemed like a solid five minutes with my head bent down by the back wheel, fiddling with the chain, and watching as the grease turned my hands into those of a different race. I had the chain in place in the front, but the back was a little more challenging.  My legs ached. If only my fingers were daintier, I reasoned.

Finally, I looked up. Only in New York does no one stop for a poor girl, helpless in the face of technical labor. We’re all too busy. Maybe if I had a bigger gash on my knee someone would have cared. I tried to pull back my hair using just my palms. For any parents who tell their kids to stop picking at their faces, I implore you: just make them change a bike chain.

“Do you need a tissue?” A woman mistook my hands behind the head for a sneeze-ready stance. Or maybe it was my expression. “You good with chains?” “Oh, no. Let’s stop the next guy.” She stared at my fingers. “Here take my tissues. Take them all.” I love out-of-towners. Sometimes. She flagged down a male cyclist, and together we watched as he turned my bike upside down and strung the chain back into place. “The back first, then the front,” he instructed. At this point, there was no turning back, and so I thanked them both, and pressed ahead to KGB.

When I arrived, the Writer was reading. I didn’t bother sizing him up as I made my way to the ladies room, and vigorously pumped at the empty soap dispenser. Of course. And no paper towels, either. I thought about sneaking into the men’s room before settling on toilet paper.

I stood in the doorway and watched the Writer read from his memoir, the grease still coating my fingernails. He was nervous. His intonations were all off. It was as though he miscalculated his own punchlines. He was a walking exhibition for the Writers Are Meant To Be Read And Not Heard contingent. Afterwards, he stalked to the back of the room, kissed his parents goodbye, and sucked down vodka. He was hefty and had aged poorly, and was not unlike how I’d imagined him.

The next writer was up: a comic who riffed on his homeboys Joe Biden and Barack Obama. He had a vague air of Presence. I thought about how I had to talk myself into coming here and smugly smiled. Would it be weird to go to this thing alone? I didn’t really want to ask anyone to come with me, and especially not so last minute, but was it weird to go to a bar alone? Definitely not, the crowd assured me. I caught the Writer looking at me out of the corner of my eye. I crossed my legs.

Next up was a woman whom the Internet tells me is a New York Times bestselling author. To me, she was just a writer who could contextualize her way out of a paper bag. “So—what I’m going to read—just think of it as if I were on a month long PCP trip. That’s not what it was, but for the sake of context, for this crowd, it was a PCP trip.” Why are they all so awkward? In addition to disclaimers, this woman also had a penchant for asides. “I had self-diagnosed myself as bipolar,” she explained a paragraph. “The doctor thought it was alcohol withdrawal.”  “I had an autoimmune disease of the brain.” But I thought you weren’t going to tell us what you were suffering from. Which is it?

I started to think about writers and the desperate desire to editorialize. That writers are terminally unsatisfied with their output, refusing to let it stand, even in a technically complete state. If it’s not your editor, it’s you. Do I do this? I’ve never done a reading, but I could see it happening. Maybe because of nerves, which always seem to encourage rambling despite the escape route of words in front of you. Or maybe because writers always feel the need to be clued in, and we want to involve our audience, reward their own investigation. Is it altruism, or a defense mechanism?

“I actually met Emma Forrest in this bar,” the Writer commented on his ex-girlfriend’s inclusion in the excerpt. I know that, already, I thought. Just let them read the book and find out for themselves. What’s wrong with a little mystery. If the paragraphs are good, we won’t care that we have no idea what’s going on. Better yet, we’ll be curious. Maybe then someone will take you up on the free copy of your book you offered a few minutes ago to a room of blank stares. How embarrassing.

I thought about what I was going to say to him when the reading was over. How I would break the ice. “Hi. I liked your book. I almost died coming to hear you read it. But really it’s not about you at all. I just felt like I should go to a reading and this seemed safe.” From his book, it seems, he would appreciate the honesty.

I went to the bathroom when it was over, and came back to a crowd surrounding him. I went outside to meet my bike. I was never going to talk to him. As I unlocked the wheel, he came down the front steps for a cigarette with his girlfriend. She was saying something that didn’t interest him. I threw my leg over the seat and pedaled off. I would email him and say, I’m not good with approaching people who have already been approached. I reached the bridge, climbing it with care. The humidity was back, but I didn’t break a sweat.