Remembering and running into Ernest, another old friend. 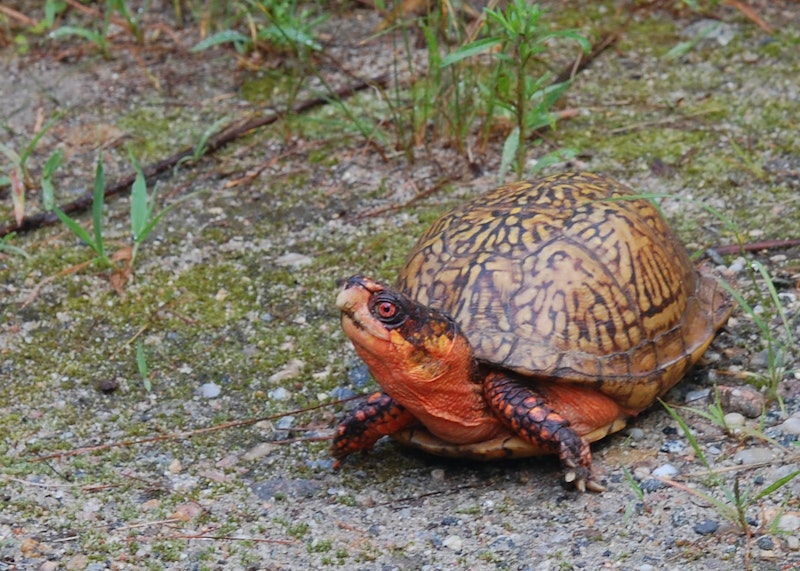 Okay… I’m in Grenada… I think… there are SO many turtles here… it’s a bit disconcerting. I never could trust a turtle. They don’t like to share. And what’s with the movement? So slow… don’t you have somewhere to be? At home, maybe? Don’t your wife and kids miss you. Feh… they’re all lushes, too. Totally in the bag by noon. Although I met a nice one once: Ernest. Very sad animal, terminally alone and world weary and wishing for things that weren’t real. We were stationed in Kosovo under cover of black ops darkness in the nineties and he had a real tough time. Could never find his toothbrush, always losing money, couldn’t get a girlfriend, and then all this disappointment would make him lazy, jealous, spiteful, full of grievances…

We saw a lot of good bodies die that month and I can tell you his PTSD comes from being rejected by Rebecca. Ernest had orange and purple spots on his head so he thought he could make it with a peacock. So he sticks his head out on the chopping block and gets rejected, and he never left his shell fully after that. It was a shame too because Ernrest was ribald. I mean, lampshade on the head level fun. So it was a major setback for him and our team, who all came down with Ernest’s contagious depression and ill manner. Everyone started shaving with their broadswords and missing the carotids and katydids by millimeters, so the government brought us home and put us all on psychotropic medication, which I always tossed over my shoulder like salt, but Ernest kept at it. I think it made him depressed, all the lithium and salt goods.

I was walking here, along Grenada Avenue, when I saw a familiar looking turtle crossing the street very slowly. It had orange and purple spots just like Ernest, and that same dejected introvert energy (I’m a libra, we pick up on these things). It was too noisy to call out to him (coconuts were being cracked), so I started jumping over cars and spur clawing people and random passersby just to get a better look at the guy. My memory is a little fuzzy after that, because as soon as I got close enough to realize that no, this was not Ernest, but in fact a rock with some paint on it, a fucking human tried to PICK ME UP and pet me. Let’s just say I’m not actually in Grenada. Anymore at least. Look, I’m sorry, I know she had kids, but this was self defense and I don’t have time to defend myself in court over some dumb bitch that assaulted me in the middle of the street. I’d rather think about Ernest and how I’ll probably never see him again, but apparently I’m not short on running into turtle-esque stones all over the world and spilling blood over them. With peace and love, from the runt of a plane cargo carrier, I send you all the best, and wish you a happy (insert year here). I know it’s going to be cold, but not where I’m headed.