Being Non-Binary in a Binary World 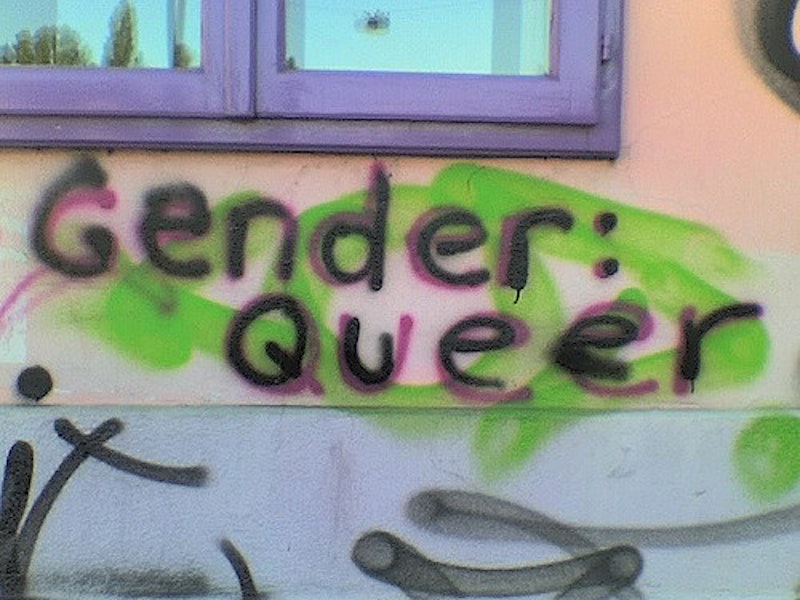 I managed to go through the Christmas holidays without one drop of alcohol. Throughout this process, I’m finally confronting and being honest about the emotional issues that led to my drinking. One in particular is how much it sucks being a non-binary trans person in a gender binary world.

Growing up in the 1980s and '90s, every TV show, movie, book, and advertisement said people born with penises like me were supposed to act a certain way. I realized early on I was already failing at being a boy because I flinched every time a ball came towards me in gym class. I preferred jumping rope with all the girls. Yet I knew I wasn’t a girl; girly, yes, but I never felt I was supposed to be born a girl.

Then as a teenager, I discovered the LGBT world and felt there was finally a place for my androgyny. Unfortunately, the LGBT discourse as the time was only focused on the L and G, with the B as just a footnote, so I didn’t think I was queer enough to join in. The T only referred to people who wanted sex reassignment surgery, and I never felt that uncomfortable with my genitals. It wasn’t until my 30s that I learned about people like Leslie Feinberg and Kate Bornstein who’ve been broadening the definition of transgender to include non-binary people (although the term didn’t exist at the time) decades before the advent of Tumblr. But since I didn’t know about either Feinberg or Bornstein at the time, I just assumed I was an androgynous bisexual man.

I’ve since learned that gender is not a strict binary of man and woman, and that there are others whose sense of self transcends this binary. Unfortunately, there still aren’t a lot of mainstream non-binary role models, so I have to teach myself how to manage social situations without gender expectations. For example, most of my co-workers at my old job were parents, so I was often invited to their houses to celebrate their kids’ birthdays. They all knew I was non-binary, and they were okay with it, so they didn’t mind me showing up wearing women’s t-shirts, women’s jeans, and women’s shoes. However, even with their support, the social interactions were still awkward.

What would usually happen was one of the men would ask me to help the other men carry the big long tables out of the shed to set up outside. Since someone of my anatomy has more muscle mass than people of a different anatomy, I was always happy to help out. We set up all the tables, and they thanked me for my help. After hanging out with the men for a while, though, the conversation often turned to unfamiliar territory: sports, grilling, and home repair.

“I bought these cute shoes from Target yesterday!” I chimed in attempting to be one of the guys. The men just smiled and nodded, so I eventually walked away and hung out with the women as an effort to fit in.

“Oh, thank you!” I responded. Finally, I thought, I can talk about clothes, hair, and manicures with someone! At that moment I was one of the girls until the subject of the ridiculous things men do popped up. At first I nodded in agreement with the shitty things men do, but then one of the women would say, “Men just don’t listen! Oh, uh, no offense, Trav.” Everything was going so well until someone had to point out that I’m not one of the girls after all. That’s when I’d usually walk away and play with the family dog.

Normally this social dysphoria is manageable, but sometimes it gets so overwhelming that I need to “pick a side” so I won’t be such a freak. However, as a friend told me a few years ago, I’ve already picked a side: I chose to be true to myself.