Reflecting on hostile tendencies in the mind of an otherwise wise bird. 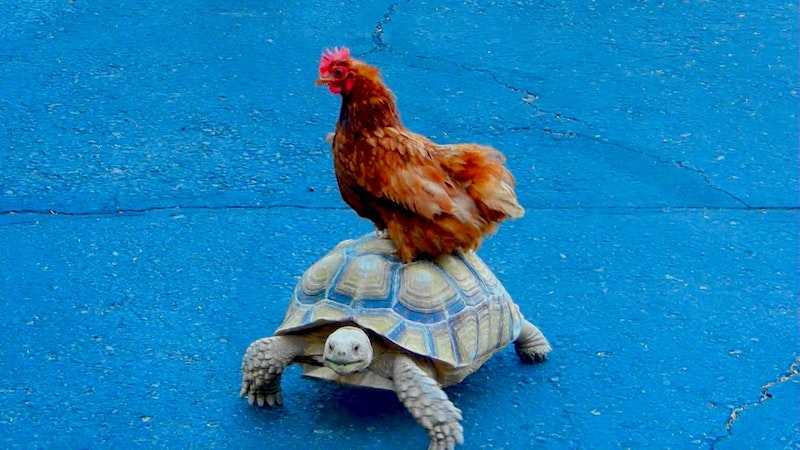 As I went out one morning, before the dawn, I looked back at my barn and my family still sleeping inside: Bennington in his books, Monica in her drawing room. Fainting couches in every corner. By then, I thought, we’d figured out how to live. I could surround myself with my problems and projects and never run out of material, Monica could work from home (drone strikes), and Bennington could continue in his recovery and finally become a productive member of society. The three of us could all live happily by ourselves in our Massachusetts cabin and never surrender any of our dignity or humanity. We could refuse to participate in the world, reject its insane convulsions and explosions of violence and hatred, and make our own little nook where compromises are never necessary. And I thought we could do it for years and years and years, just as we flew through history while never leaving the ground.

And I realized then that I’d never be as happy, as I am here, with my family, alone from the world, together.

Further down the path, there was an older gentleman I recognized from the farmer’s market. I said hello to him, but he didn’t recognize me. Monica and I used to go out on Sunday mornings and plan our meals for the week: rice on Monday, kettle corn on Tuesday, rice-fish on Wednesday, smoothed popcorn on Thursday, and burnt oranges on Friday (we ate out on the weekends). This was when we first moved to Massachusetts, so many centuries ago, before the dreaded White Man reared his ugly head. It’s true that indigenous Americans hunted, killed, and ate us, but that’s life, honey. I eat bugs every day. I’m sure they’re not happy about it. And I didn’t care that indigenous Americans respected animals and nature more, it was still an adversarial relationship. Having said that, they never approached the Holocaust of industrial murder that Europe brought us.

I went back to the gentleman and asked if he remembered selling blueberries and whip-nuts at market. I was sure it was him, but he said no, I’m allergic to hay and the color blue. I wouldn’t be caught dead with a blueberry. “But wouldn’t you, though?” The gentleman sneered at me and walked away very, very, very slowly (he was a turtle). I didn’t understand. Even if he didn’t recognize me, why such hostility? Wanna go, bro? Wanna box? Wanna get into a tussle? Because I could murder a turtle in 20 seconds no problem. I wouldn’t want to, ever, but, if necessary, there would be no other outcome than my besting the turtle. I would drink his green blood in the grass.

And as I kept walking, I kept making myself angrier and angrier, more and more hostile and wound up, so much so that by the time I reached Main Trail I could barely walk, my claws were shaking so much. I turned around and went back to my family, wondering why I had so much hate inside me. That turtle didn’t deserve my anger, even in private—I knew I shouldn’t be thinking like this. But as I get older, it gets harder and harder to control. I only need the slightest justification to completely chimp out and spur claw an innocuous or innocent target. My family means so much to me, and in defending them, I’ve built up far too many arms. There have been accidents, and friendly fire.

As I went walking back home that morning, I resolved never to fire in the wrong direction again. But resolutions snap when the body takes over. I knew then and I know now that it’ll only get harder to stay level-headed and cogent, and with so much time in the barn, I’ve lost perspective. I’ve had bad days since then. But when I walked in the door and Bennington asked for his cocoa milk and Monica for her makeup plate, I only smiled and said I forgot—and that I’ll be right back.