Some of these trees have been here for over 200 years, by the Heyerdahl house. 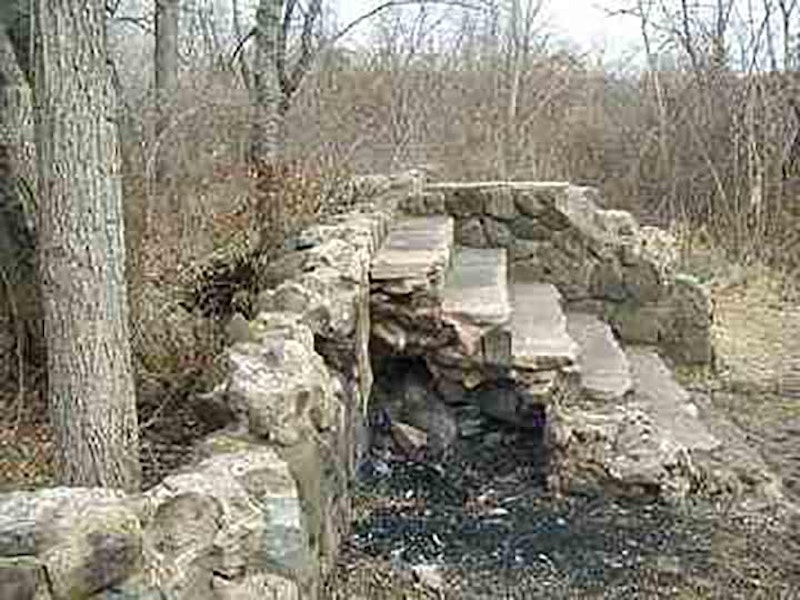 In the remotest section of Staten Island, on a high hill with nothing but tangled weeds, snarled vines, migrating birds and hissing insects there lies the remains of one man’s dreams to bring verdant fields and cash crops to some of the highest hills in the Northeast south of Maine.

We’ll begin in Egbertville, a region in Staten Island just east of Richmondtown and its collection of historic houses from all over the borough. Known in previous eras as Morgan’s Corner, Tipperary Corner, New Dublin and Young Ireland, Egbertville was originally settled by Irish immigrants but later took a more Italian cast (as street names like Luigi and DeMarco Places will attest). Though this area is more suburban than when I first visited in the 1970s, Egbertville still retains a rural feel in some areas. Begin the journey at Richmond Rd. and Hitchcock Ave.; walking up Hitchcock for a block and then to the right along Mace St., the entrance to the White Trail is just ahead. 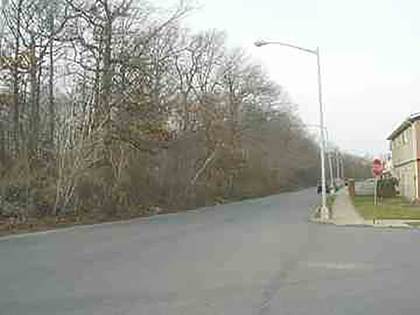 Egbertville and its neighbors to the west, Lighthouse Hill and Richmondtown, are effectively cut off from their neighbors to the east, New Dorp and Oakwood Heights, by a band of green along Reidel Ave., seen here. However, it beats what the alternative would’ve been. In 1964 it was Robert Moses’ intention to run Richmond Parkway through here, which would’ve destroyed High Rock Park and some of what we’ll see on this page. In a 25-year battle, residents won and Richmond Parkway, which was supposed to link up with the Staten Island Expressway, now ends at Richmond Ave. and Arthurkill Rd.

Construction on the parkway had already begun, however, and this “greenbelt” through Egbertville is one remnant; off ramps at the SIE near the College of Staten Island are other remnants. Those ramps are now used for nature trails, and the Richmond Parkway excavations were used to construct “Moses Mountain” behind the old Seaview Hospital, a hikers’ favorite from which a 360-degree panorama of Staten Island and NY harbor is in view. 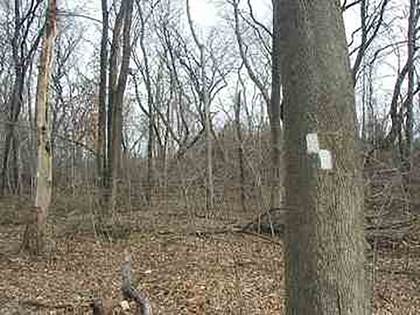 The White Trail is clearly marked for hikers and trail birds. However, the Urban Trail Club’s color coding demands some explanation. When forging recreational trails through natural or deserted areas, the Urban Trail Club was presented with a conundrum. How to mark the trails without installing obtrusive signage? They came up with the solution of marking trees and boulders along the trail with colored painted markers, known as “blazes.” Along the trails, you occasionally see double blazes like these. They mark “bends in the road.” The top blaze is oriented toward the bend the road takes. A rare triangular triple blaze marks the beginning of a trail. You won’t see them often, since these trails run off and on through much of Staten Island. It would be helpful to have a map to tell where these trails go. An invaluable resource in that regard is Bruce Kershner’s book Secret Places of Staten Island, which spells it all out in easy-to-read trail maps.

The White Trail winds through Egbertville Ravine. The ravine was formed 15,000 years ago from melting water from a huge glacier. A wooden bridge takes the White Trail over the trickle that’s Richmond Creek. This creek begins in the highlands south of Seaview Hospital, wends through Egbertville and Richmondtown, and becomes a mighty estuary emptying into Fresh Kills Creek and the Arthur Kill west of the Staten Island Mall. Richmond Creek was dammed around 1900 and a sawmill occupied part of this area; yet it’s still heavily wooded with mostly tulip trees. 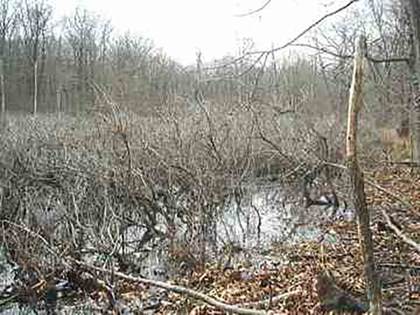 Crossing Meisner Ave, near its intersection with Rockland Ave. and Manor Rd. (watch the traffic) you soon hear the traffic noise fall away. At this point the Yellow, Red and White Trails all converge: stay with the White Trail. At length, Buttonbush Swamp, shown above, will appear to your left. We’e entering an isolated area of Staten Island known as Bucks Hollow. Parts of Bucks Hollow were used by Revolutionary spies as escape routes from Richmondtown to reach a ferry at Kill Van Kull which took them to Continental Army units in New Jersey. Buttonbush Swamp is known as a haven for both migratory birds and swamp frogs in season.

After passing Buttonbush Swamp, keep to the White Trail. The trail gradually gets narrower. That’s your cue to keep an eye out on the right for another narrow trail that leads off to your right. That is the unmarked Orange Trail. Take it. You’ll be climbing for about one-half mile up a very steep incline. This route is inadvisable after a heavy rain. The sides of the trail are lined with bayberry. Follow the trail to the left after it reaches the top of the steep hill. It winds around a little, but soon you’ll arrive at a clearing. You’re now in one of the most isolated regions of New York City. There are no buildings within about two miles of here. Except one. 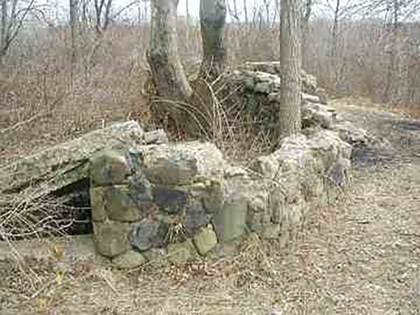 Thorwald Heyerdahl built this stone house atop the hill in 1861-62 when he signed a five-year lease indenture with property owner George Byron. In 1866, Heyerdahl purchased the nine-acre property for $4800. In 1871, he purchased two adjacent pieces of land, one 3 ½ acres and the other a little over an acre to give him access to Rockland Ave. Heyerdahl planted grapevines and an orchard in an attempt to establish a vineyard. His plans were foiled by the soil, high in magnesium from the underlying serpentine rock and not tolerated well by most plants. 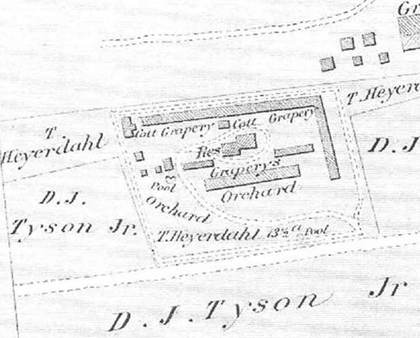 This 1874 Beers Map shows how much work Heyerdahl put into his dream. You see graperies, orchards, a residence and cottages. There are at least two wells on the property as well as two man-made ponds. Unfortunately, Heyerdahl died sometime between 1871 and 1875 and left the property to his widow Caroline. The New York State Census for 1875 under Richmond County, Northfield E.D. 02, page 10, line 38, has the following information for House #95: made of stone, value not listed, owner C.S. Heyerdahl, female, 43 years of age, born in Rhode Island, currently widowed.

The census counted three servants living on the property with Mrs. Heyerdahl at this time; James Burke, male, 25, born in Richmond; Thomas Burke, male, 16, born in Richmond; and Jane Long, female, 25, born in Ireland. They may have occupied the cottages on the property. Heyerdahl’s widow Caroline remarried and became Caroline von La Roche and she disposed of the 13 ½ acre property. The 1917 Beers Map identifies Eugene Graf as the owner of the nine-acre piece of this property. The rectangular piece was owned by someone else by then. In 1928 the City of New York took over all the property along this section of Rockland Ave. including Heyerdahl Hill as part of its purchase of the 560-acre Latourette Park.

We’ll leave the Heyerdahl house and retrace our path, past Buttonbush Swamp, Richmond Creek, and back to Egbertville. Before leaving the area, notice the tulip trees, which grow perfectly straight and were used by Native-Americans to make kayaks. Some of these trees have been here for over 200 years. Retrace your steps or explore other trails, which are well maintained by the Parks Department. Watch out for poison ivy and ticks.