Take Me to Throgs

However Throgs Neck is spelled, it’s a peaceful, tranquil area with a couple of private communities that enjoy views of the water-filled surroundings. 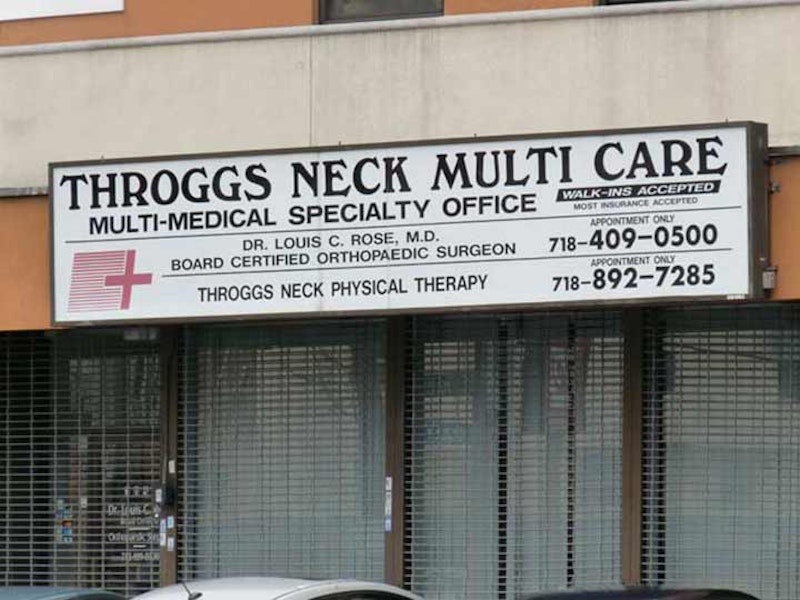 Throgs Neck, mainland Bronx’s most southeastern redoubt, was named for an early British settler, John Throckmorton, who arrived in the peninsula now capped by Fort Schuyler in 1642. Throckmorton, like Anne Hutchinson, had religious differences with the rigid Puritans of New England, moved to Rhode Island with its founder, Roger Williams in 1636, and later decamped to the Bronx because he may have feared that Massachusetts would invade the tiny colony. Both Thomas Pell and Throckmorton had to pledge allegiance to the Dutch crown before granted permission to settle. Throckmorton later fled Indian aggression and wound up in Rhode Island again and later, New Jersey.

The peninsula, or “neck” (cf. Little Neck in Queens) was given an abbreviation of his name and Throgmorton Ave., also a tribute, is a variant spelling. Throgs Neck is also occasionally spelled with a double g. The explanation for this may be that in the early days of printing spellings were hardly standardized, and wouldn’t be until the days of Samuel Johnson and Noah Webster. However Throgs Neck is spelled, it’s a peaceful, tranquil area with a couple of private communities that enjoy views of the water-filled surroundings. 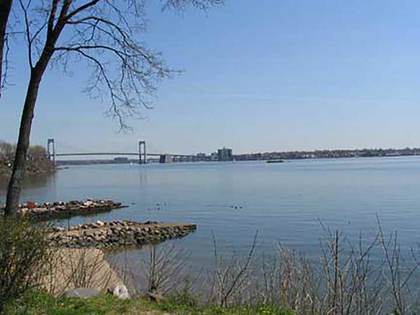 Take a walk along Indian Trail, which meanders along the East River shore from Throgs Neck Blvd. to Jasmine Pl., past a multitude of tiny homes originally built as summer dwellings but since winterized, along a cliff which affords terrific views of the nearby Throgs Neck Bridge and looking west, the Bronx-Whitestone Bridge and the towers of Manhattan beyond it; were it not for those reminders, you’d think you were in a small town along the seashore, which Silver Beach pretty much is. Only politically does the Bronx claim it. Here, homeowners possess the buildings in which they live, but not the property on which they stand; a similar situation exists in nearby Edgewater Park. 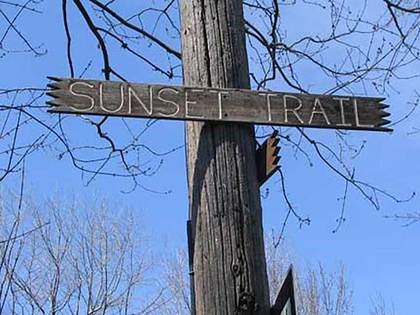 In these riverside, or soundside (depending on what side of the Throgs Neck Bridge you’re on) there’s a conscious attempt to de-New Yorkify the surroundings, since in Silver Beach, the street names can be found on wooden boards nailed onto the telephone poles, and the streetlamps aren’t the standardized New York city issue. It all combines to impart a surreal, if pleasing, effect. 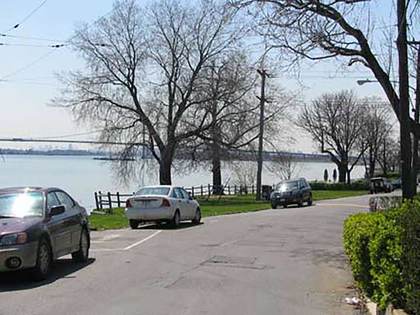 Co-ops may be commonplace in Manhattan high-rises, but few people realize how much of the shoreline in the Bronx and Queens has become private communities. The Green Grass, located at the top of Indian Trail, a long narrow walking path along the water, is guarded and access down to the best beach on the river is prohibited unless you’re a resident. While Silver Beach is an older community, current low-rise developments in the outer boroughs escape city zoning regulations regarding waterfront access and continue to be developed privately, effectively shutting off public access to the river. 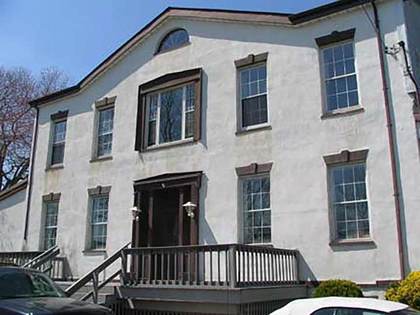 This is the Abijah Hammond Mansion, built circa 1805, at Sunset Trail and Plaza. It became home to a couple of generations of Havemeyers and is now used as the office for the Silver Beach Co-op Association. 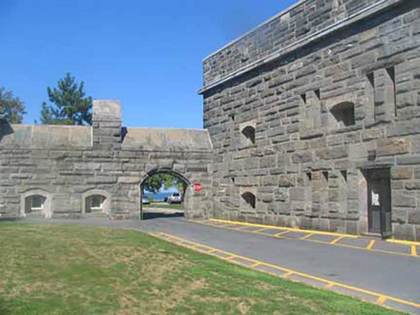 Fort Schuyler, named for Revolutionary war general Philip Schuyler, at the tip of a peninsula at the end of Pennyfield Ave. and jutting into the junction of the East River and Long Island Sound under the Throgs Neck Bridge, was built between 1833 and 1851 as part of the “Third System” of harbor fortifications. The first two “systems” were initiated during the Revolution and War of 1812, while the third was enacted as a pre-emptive means of stopping any enemy vessels with designs on New York City. Its sister fort, Totten, was finished by 1864: rumors abound of tunnels dug under the river connecting the two forts, and one story maintains that a thick link of chain was strung between the forts to stop any hostile ships from proceeding closer to town.

The City obtained land for the fort from a William Bayard in 1826: however, its construction wasn’t completed until 1851 and it wasn’t completely garrisoned until the Civil War began. The fort, which never saw hostile action, served as a military prison and hospital, but closed in 1878 and lay empty until it was renovated by the Works Progress Administration beginning in 1934. That year, the New York Nautical School moved into new headquarters at the fort. The school, now the State University of New York Maritime College, had held classes aboard the USS St. Mary’s since 1874. The school remains based at the fort, with its present training vessel being the Empire State VI. 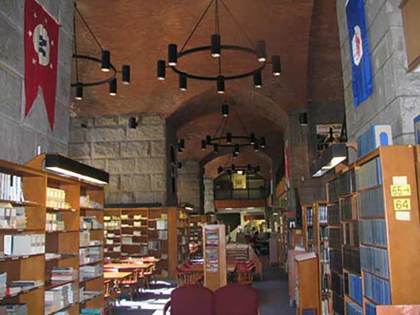 Since 1986 Fort Schuyler has been the setting for the Maritime Industry Museum, established by Captain Jeffrey Monroe, Associate Professor of Transportation at SUNY Maritime, and Jack Hayes, a 1947 graduate. The museum offers one of the world’s largest collections of maritime industry material, featuring “Evolution of Seafaring” from the ancient Phoenicians until the present, as well as a realistic depiction of the Brooklyn Navy Yard in its peak years, 1942-1944. The Port Authority presents an overview of its role in the region’s economic development. The museum’s Victory Hall is dedicated to the Victory Ships that supplied materiel and armament to US vessels during the Korean and Vietnam conflicts, while the Museum has a collection of hundreds of scale models of cargo, passenger and naval ships including the RMS Titanic, Andrea Doria, Queen Elizabeth, Queen Mary, and underwater exhibits of artifacts recovered from sunken vessels. The Maritime Museum is funded, staffed and maintained with voluntary contributions and support. For hours, call (718) 409-7218. 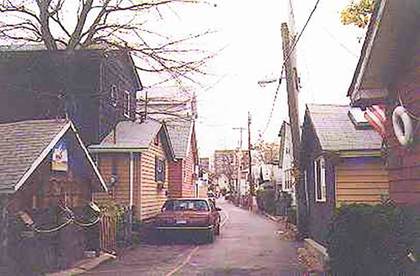 New York City's obscurest Main Street is located in the private Bronx neighborhood of Park of Edgewater, a.k.a. Edgewater Park, which is wedged north of the Throgs Neck Expressway and south of Eastchester Bay. Park of Edgewater wasn't represented correctly on maps until the 1980s. Like Silver Beach Gardens, Edgewater Park residents own their homes but not the property. It has been thus since about 1910, when bungalows were built on the former seaside estate of the Adee family. One of New York City’s few volunteer fire departments is based here; another is in Broad Channel in Jamaica Bay. During their early years, the bungalows were just wooden tents with canvas tops, without heat or electricity; kerosene stoves were used for cooking. They were occupied in summer only. Today they’ve been completely modernized.