He was usually at the bar in the afternoon which later I learned was because he couldn’t safely go out at night. 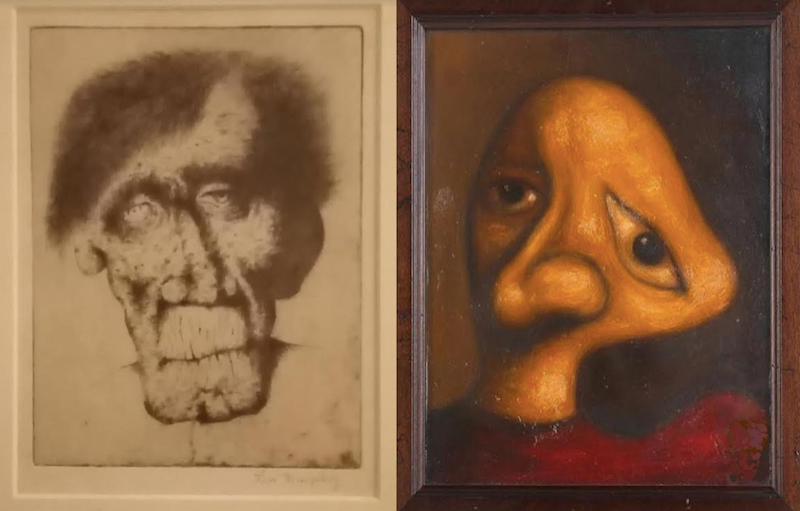 Anyone who went to The Mount Royal Tavern at a certain period (my residency was from the late-1970s-1995) would’ve noticed an older man who sat at the end of the bar wearing a purple velvet coat, black pants, a silk ascot and a beret. He’d sit there by himself, and stare intensely forward, with a slight air of menace, drinking beer after beer. He was usually there in the afternoon which later I learned was because he couldn’t safely go out at night.

At this same time there would occasionally be expositions of what looked like old master paintings of Lovecraftian-type figures hung upon the walls of the Tavern; somewhat monstrous, often skeletal-looking portraits of imaginary figures done in somber colors. I always liked them, and had a lot of variety even if the basic subject was invariable. A lot of sad soul. At some point the connection between the man and the paintings was made and I learned that his name was Leo Murphy.

When I discovered that he was an artist and had been on the scene for a long time, I wanted to meet him. So I told him how much I liked his work and then asked if I could buy a painting. He thanked me and invited me to visit his house, see his work and pick one I liked. He gave me very specific instructions. I was to come at a precise time. He told me to have nothing valuable-looking in my car and beep when I was in front of his house. This was necessary because he lived in the ghetto off North Ave.

I went to his house, which was a mansion in a once-fashionable section of town, Druid Hill Park, the same neighborhood where Gertrude Stein had lived as a child. I beeped, saw a curtain move to the side on one of the upper floors, Leo appeared and motioned for me to wait. A minute later, the front door opened and he came down to the gate. He said someone had tried to break in recently and the door was broken; he jammed it shut with a two by four. The place was filled floor-to-ceiling with boxes, newspapers, and stacks and stacks of vinyl records everywhere, on the steps, in every room we passed through. He explained with irritation that his companion, Wally, was a compulsive record collector. Wally was always buying record collections from estates, individuals, yard sales, anywhere he could find them. Wally had half a million records in that house alone and as many more in a storage facility in York, Pennsylvania. When I first met him he was sitting at a desk cataloging in pencil the entries for Harry Belafonte’s Christmas album.

We continued up the steps to Leo’s studio. He said it was the only room where Wally didn’t have the right to store records. He was a good host and we talked for a while. I got the feeling that he was a person who’d developed a consistent and somewhat Romantic personality from a set of carefully chosen materials. Some things fit, some things didn’t. Aleister Crowley, Rembrandt, and Symbolist poetry fit. He mentioned Somerset Maugham’s Of Human Bondage, saying. “He cried when he wrote it; I cried when I read it.”

He took me into an adjoining room which was his studio, and showed me a large number of his works. Some of these I’d seen on display at the Tavern but the great majority I’d never seen before. He described them in very direct ways. One description I’ll never forget: “This one’s a prick, that one’s a pussy.”

Another he described as having a “shit brown background.” I loved his work and picked one out for $100. I felt like I was robbing him, but that’s the price he wanted. I bought several more over the years. I began to see there was a great variation in his work, though it was subtle. Some used very bold colors. During this visit, he showed me something he’d been working on for over 20 years, a Madonna and Child. It was the strangest Madonna and Child I’ll ever see. Most of Leo’s paintings were around 15 x 12 inches, so this work had a monumental feel at about 90 X 60 inches.

As he continued to show me his work, I took a seat on one of the many white 10-gallon paint buckets sitting on the floor. Leo quickly told me not to sit on it since it was a piss-bucket. He explained they had neither plumbing nor running water in the house and that he had to regularly carry them downstairs and empty them. He also had water buckets by which, using a hose at the back of the house, he’d bring water up to his room. I remembered my coffee and hoped he’d chosen the right bucket.

I visited him regularly before I moved to France. I learned a lot about him, his intense feelings of alienation from his family, what it was like being gay in the 1950s (“gay men were called artists and prostitutes were called actresses”). He’s attended The Maryland Institute, worked for years at a department store called Brager-Gutman’s, that he’d been with Wally since the early-1950s. Once he said to me, when I told him I’d been in contact with a local celebrity in connection with a musical composition contest, he said “That Queen? Whatever you do, don’t turn your back on him!” Later I wrote a cycle of poems about these visits. He was one of the last people I said goodbye to when I moved to Paris. Afterwards, we kept in touch by mail, he sent me short letters with sketches in them. Then I heard he moved to York, Pennsylvania and still later, that he had died (1936-2013.)