Sam Shepard's play is a showcase for male actors. 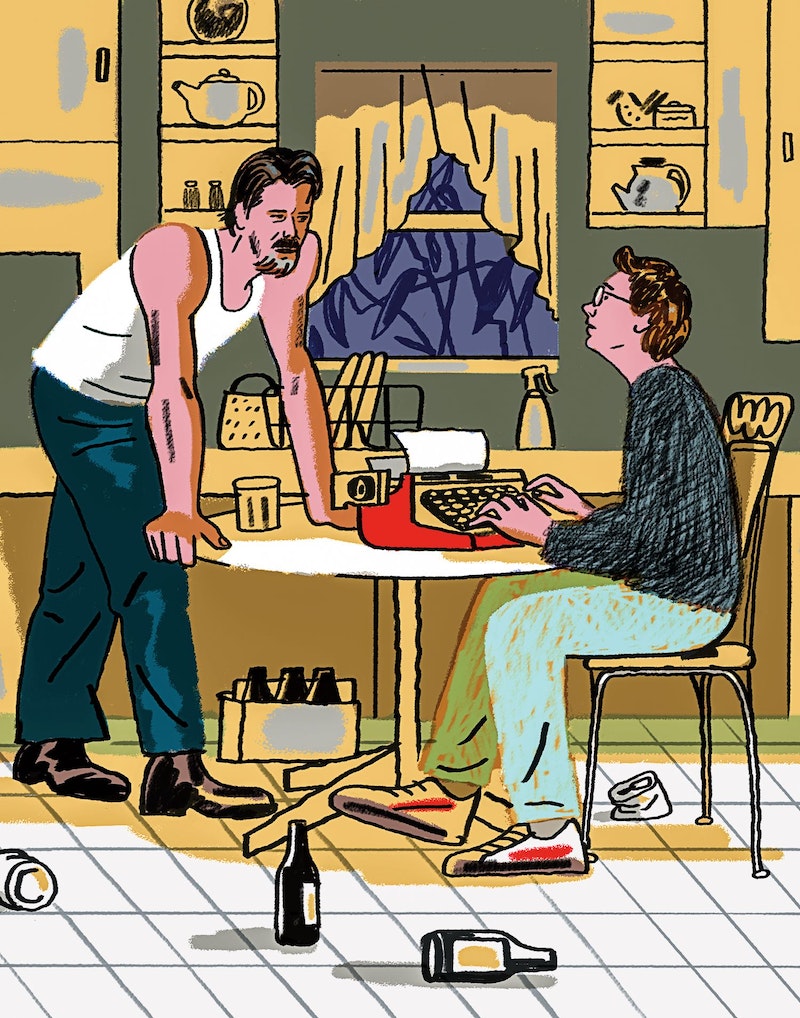 Generally, I steer away from works of art that are about creating art. I'm unable to finish any book by John Irving, who loves making himself, as a "writer," the protagonist of his novels. Irving once dumped on Tom Wolfe during a literary feud because of Wolfe's poorly-constructed sentences, which  he said made him gag, but at least Wolfe didn't insist on being the star of his own novels.

I don’t like artistic navel-gazing, but make an exception for Sam Shepard's extraordinary True West, which long ago I saw performed at the Cherry Lane Theater in downtown Manhattan, starring Tim Matheson and Daniel Stern.

Stern did a good job, but the role of the "psycho" brother (although which of them best fits that description becomes less clear as the story unfolds) in this tale of sibling rivalry belongs to John Malkovich, who played "Lee" onstage, alongside Gary Sinise's "Austin" (Sinise also directed the play), Lee's "normal" brother, in the 1982 Steppenwolf Theater Company production in Chicago before the play moved to the off-Broadway Cherry Lane Theater. I've only seen the recorded version of this production, but it's a powerful one.

Lee's a ne'er-do-well fringe character who gets his cash by breaking into homes and stealing TVs. Austin's a clean-cut, successful screenwriter who's house-sitting for his mom at her L.A.-area place when Lee drops in unexpectedly. That's when the pyrotechnics begin—these two brothers aren't sympatico. Austin's physically afraid of Lee, as evidenced by the careful language he employs with his estranged brother while simultaneously trying to finish a script on his typewriter. "You can stay here as long as I'm here," he tells Lee, to which Lee responds, "I don't need your permission. She's my mother too."

It's frosty between these two opposites (who appear to represent alternative sides of the playwright), but the mild-mannered, East-coast-educated Austin soon gets a curveball that brings out the beast in him. He wants Lee, who's guzzling beer and has a grubby appearance, to leave the house for a short time while a film producer, Saul, comes over to look at his screenplay. Lee agrees, but makes Austin give him his car keys in exchange. The foundational twist of the story then occurs when Lee returns while Saul's still there and pitches him his "true-to-life Western" story that fascinates the producer. Saul agrees to play golf with Lee the next day to discuss the matter further. Oddly, the primitive, chaos-producing Lee, who's just come out from living (roughly, presumably) in the desert, is a golfer, while Austin isn't, so the younger brother's excluded. Lee, talking to Saul after they finish the golf match, says, "Hot shower, snapping towels at each other's privates. A real sense of fraternity."

The golf outing went well for Lee, from a business perspective, and Austin's furious that his no-account brother's moving in on his turf. He's always been envious of Lee's freedom, but now that the vagabond's infringing on his livelihood, his emotions are raw. Austin's not the milquetoast viewers see in the beginning of the play, a narrative shift that gives the story a backbone. Saul tells Austin he favors Lee's story over the screenplay Austin's been writing, which puts the Ivy Leaguer into a state of high anxiety and disbelief. Austin flips out and steals toasters from neighbors after getting shitfaced on Champagne. The fraternal roles got reversed, except that Lee can't write, meaning he needs his brother to collaborate with him on the project.

I just watched, on Amazon, the filmed version (2013) of London's Tricycle Theater production of True West, starring Irish actor, Eugene O'Hare, as Austin, and British actor, Alex Ferns, as Lee. In contrast to the Steppenwolf production, Lee doesn't lay his hands on Austin, as Malkovich did in his portrayal, but he's more aggressive with his language and affect than Malkovich, who signaled coiled aggression in a more soft-spoken manner. O'Hare gives Austin a Minnesota-sounding accent (reminiscent of the dialogue in the Coen Brothers' Fargo), while Ferns speaks much of his dialogue with Southern intonations. Their contrasting ways of speaking English is disconcerting—even mannered—given that they were raised by the same parents. Ferns, who often has spittle dripping from his chin, is a feral presence commanding the stage.

The two brothers are connected by a drunken, missing father, a description that fits Shepard's dad. Lee seems fonder of him than Austin. Austin's more partial to their mom, whose tidy home reflects his meticulous, somewhat prissy, personality. That home, however, eventually gets trashed, mostly by Lee. Lee's character is, from an actor's point of view, one of the meatiest roles imaginable. Unsurprisingly, this play has been cited by a slew of prominent actors as the one that got them the acting "bug."

True West is essentially a comedy, but takes its time letting the comedy kick in. The constant threat of violence tamps down the urge to laugh. It took the audience at the Tricycle Theater time before it warmed up to the play's sly, dark comedy, but the laughs eventually came. The sound of coyotes howling is a recurring refrain in that production. It's the sound of menace. When the role reversal completes itself, Austin wants Lee to take him out to the desert and live with him. Lee agrees, but only on the condition that Austin writes up his story idea and puts Lee's name on it. Austin's world of imagination has been hijacked in a way that he never could’ve imagined before his brother, the grubby desert rat, dropped in.