Leave the Groundhogs and Woodchucks Alone

We’re ready to reap a reckoning. 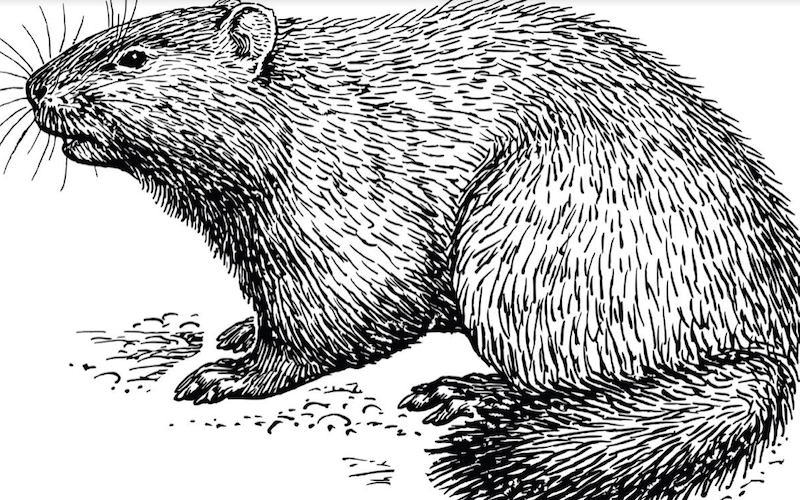 It's impossible to feel hopeful in a backward country that’s gone to seed. It's maddening. Hope. The cornerstone of a mock democracy. A prayer for those good Christians who never practice what they preach. Wishful thinking for the “Jesus loves me but not you” God-fearing flock. What better way to celebrate the changing seasons than to rely on a groundhog to foretell the arrival of spring. Prayers are the last resort of faith.

We muddle forth. Stuck in the never-ending recycling of the same old weary, dreary present. And every year, on February 2nd, the idiotic ritual, Groundhog Day, commences. This year brought tens of thousands of gawking spectators. The end result was six more weeks of winter. But other groundhog ceremonies also took place. In Staten Island, Chuck, who also goes by the moniker, Charles G. Hogg, holds court at the Staten Island Zoo, where early spring was forecast. Likewise, in New Jersey, Milltown Mel the Groundhog croaked days before the event. Also, Canada's famous albino groundhog Wharton Willie succumbed to an untimely demise before predicting anything. Yet every year, people flock to witness a group of good old white boys in tuxedos, bow ties, and top hats, swill booze and pass around a giant rodent. It's a dim-witted excuse to commemorate a symbolic tradition with roots that originated in Germany with Candlemas, the blessing of candles, to here and now with Pennsylvania Dutch meteorological buffoonery.

The movie Groundhog Day doesn’t come close to touching on how life becomes increasingly redundant. The main character lives out the same exact day repeatedly, similar to our current plight times 10. The new reality of our world is trapped in an endless supply spiral of repetition. Spinning wheels in a mucky rut of the same slimy psychosis mired in every hapless day. Subsisting on survival mode. Never getting ahead or moving forward on the merry-go-round assembly line of yet another all-American-made tragedy.

We're ready to reap our reckoning. What better way than to promote the coming of spring and the hope it brings than to rely on a groundhog who couldn’t care less about its shadow. Reverse gears and bow to the whims of weather patterns. Humans are a curious, strange breed. The fascism of sameness stifles the mind. Waiting for a woodchuck. Descendant to the squirrel. A whistle pig, as some call it. Mighty good eating too. Cousin to the gopher and prairie dog, all praise the fat rat, like sports fanatics who get stressed over their favorite team's losses. Yet we continue down a path to sheepish denial, herd mentality, and superstition.

Weather happens on cue. We want to believe in something, anything, no matter how asinine. Stopping along the way to smell odorless artificial flowers. They look so pretty, but they're fragrances of fakery. Plastic imitations of life. This illusion alludes to freedom's pursuit of happiness and insults the essence of being, free spirits, and lovers of spring everywhere. Let a marsupium mammal dictate mother nature by waiting for some fat rat to appear every year, predicting future weather. No thanks, I'll take my chances on dumb luck and personal observation. If you stick your head outside and it's freezing, there's a 100 percent probability of wintertime. I smell a rat that predicts the future.

The brisk night air casts dark shadows. It's frigid outside. The kind of cold that seeps into bones. Maybe it’ll stick around a little longer. Maybe not. I look forward to spring and all the warmth it brings. A favorite time of the changing seasons. Life's like that, too. As we do, the climate shall adapt too. Fluctuating temperatures rise and fall. Snow flurries blow around like glittering stardust. We go about our business while waiting for whatever comes along. Let the ill winds blow. Come what may, if you wait long enough, something’s bound to happen.

The night is clear, illuminated by crescent moonlight, an iridescent glow above the bright glimmering from the electric cityscape in the near distance. Let there be light. Radiant warmth to curse the darkest season. Riding out those long chilly nights. Suddenly there's a sound heard nearby piercing the silent gloaming. A chuck-chuck followed by a whistling noise. Could it be the woodchuck? They're abundant here, scurrying from under one woodpile to another.