There he sat with the self-regarding air of the connoisseur about him when really he was nothing but a clod stuffing his face. 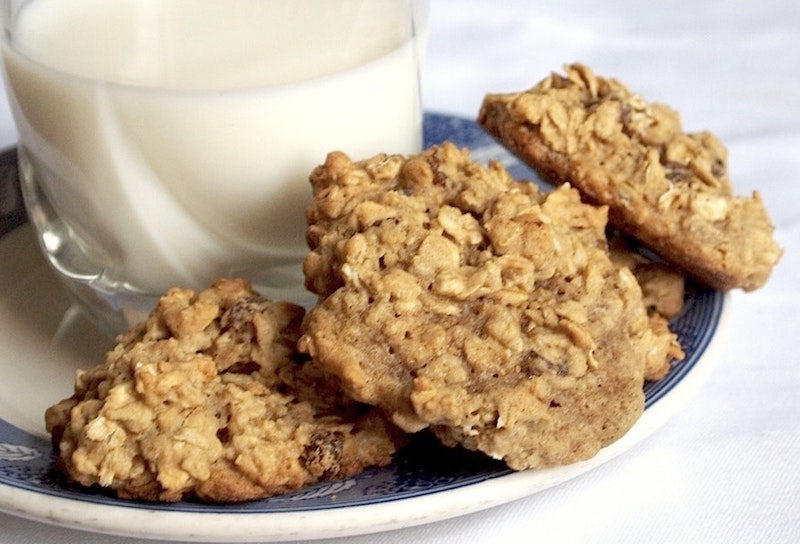 It’s sad when a husband, no longer young, feels himself in daily competition with his wife. Sadder still when—in his mind at least—he comes out the loser in most of these contests. Saddest of all when the contest in question is over something completely trivial. And when is it ever anything but?

In Paul’s case it happened most recently over a cookie. He and Jean and their daughter, Claire, and Claire’s husband, Juan Diego, were all having lunch together on a restaurant patio when Paul, who was known within the family for his sweet tooth, started going on about his “latest discovery”—a golden-brown sandwich cream composed of, as he recalled, two large gingerbread cookies on the outside and a dollop of cream cheese icing on the inside. He mentioned these details in rapturous tones to the younger couple across the table. Whereupon his son-in-law burst out merrily, “Dad, I love the way you love your desserts. You really get into the whole experience.”

Paul, on hearing his praises sung, was filled with pride, but not for long. Jean, with whom he shared the cookie the night he brought it home, now broke in with a gentle demurral.

“Are you sure it was gingerbread?  I remember oatmeal.”

Paul felt a tightening in the pit of his gut. He hated being contradicted, but it wasn’t that alone. It was also his certainty, acquired over half a century, that if Jean said such-and-such it must be so. No one could beat her for powers of perception. She went on now in a voice long familiar to him—that of the lady, gracious in victory, tossing a crumb to the vanquished male.

“I can see how it’s easy to confuse the two. Oatmeal and gingerbread are both spice cookies.”

The tightening feeling intensified. Yes, he could almost taste it now—the luscious treat with its two outer cookies both decidedly oatmeal in flavor. How had he missed this the first time around? He was taken back to that night at the table. There he sat with the self-regarding air of the connoisseur about him when really he was nothing but a clod stuffing his face. And there with the true fine palate was Jean, able in two bites (“It’s all I want”) to distinguish the subtle oatmeal flavor, like a good oenophile sampling a wine.

“What’s the bakery call the cookie?” The gentle voice broke in on his thoughts.

“I don’t remember,” Paul said. Another thing he hadn’t noticed.

He did remember the cookies displayed on a large plate, but was there some kind of sign on the plate? And was the word “oatmeal” blazoned there for all to see?

He had his answer the following day. He dropped by the bakery, and this time he saw it—a card in a holder resting on the plate of cookies, and on this card their name in black letters. He gnashed his teeth on reading the name. Jean was right; of course she was. The very first word (of three) was “oatmeal.”

It occurred to him at that moment to jot down the complete name lest he forget it when reporting back to Jean. Not that Jean was expecting a report or was even aware he was at the bakery. But for him to hold back his findings from her was too low a stratagem even for him.

He kept a pen in his back pocket, but didn’t pull it out. Surely he could memorize three little words, and he took a few moments to let them sink in. He soon had cause to regret this decision.

“You’re right, my love,” he said that night with a gallant air at the dinner table. “That sandwich cream we shared last week? Oatmeal raisin pie, it’s called. I saw the sign, and that’s what it says.”

Odd how even the gentlest voice can sometimes have the force of a blow. That was how Paul now experienced Jean’s reply. Like the blow of a poleaxe full in the face.

“I don’t remember raisins. Are you sure about that? But you had more of the cookie than I did.”

He wanted to scream in fury and pain. If Jean remembered no raisins, there were no raisins; in which case “raisin” wasn’t part of the name. So what was the actual second word?

He checked the time on the oven clock. Too late now to seek the answer. It was getting on to eight p.m. Brownie Points had long since closed.

For the rest of dinner, and right up to bed, he wracked his brains for the missing word. “Oatmeal something pie,” he kept saying. To no avail. Nothing came.

Early next morning he was back at the bakery, and going up to the plate of cookies, gnashed his teeth all over again on reading the card in the metal holder.

Jean was right; of course she was. Raisins were nowhere mentioned in the name.

Taking no chances this time around, he pulled out his pen and wrote down the name in a spiral notepad he was never without. But already the name was seared in his brain, and with or without the spiral notepad, he’d never forget it as long as he lived.

He broke his news over dinner that night.

“Well, you were right about the sandwich cream name. I went back to Brownie Points first thing this morning. It’s ‘oatmeal cream pie.’ Nothing about raisins. I have it right here in my spiral notepad.” Paul bent forward and patted his back pocket.

“You made a special trip,” said Jean, “and actually wrote it down?”

This time there was no crumb for the loser. Only a laugh that verged on a snicker.

He had his revenge the following morning, on coming down to breakfast. “Are you done upstairs?” he said to Jean, who was sitting down eating. He’d stopped on the bottom stair and was standing there, waiting.

Jean turned and looked up, instantly wary. “What did I forget?” she said, holding herself in check. She recognized his gambit, and knew it boded ill.

“You left a few lights on,” he said matter-of-factly. “I thought you might be coming back, so I left them on. But if you’re not, I’ll turn them off.”

She thanked him stiffly, and he went back up. For all her splendid mental gifts, she had a hard time in life remembering to lock doors and turn off lights. Paul, on the other hand, excelled in these two arenas, and followed her around the house putting things to rights. In all their many competitions, his only guarantee of victory rested on lights and locks; on these he cleaned up.

In the present case three lights were left on upstairs, but Paul, with his keen sense of how far to push matters, wisely refrained from specifying the number.