Taking four trains to get to Jamaica Estates, the outskirts of New York where Fred Trump raised his family. 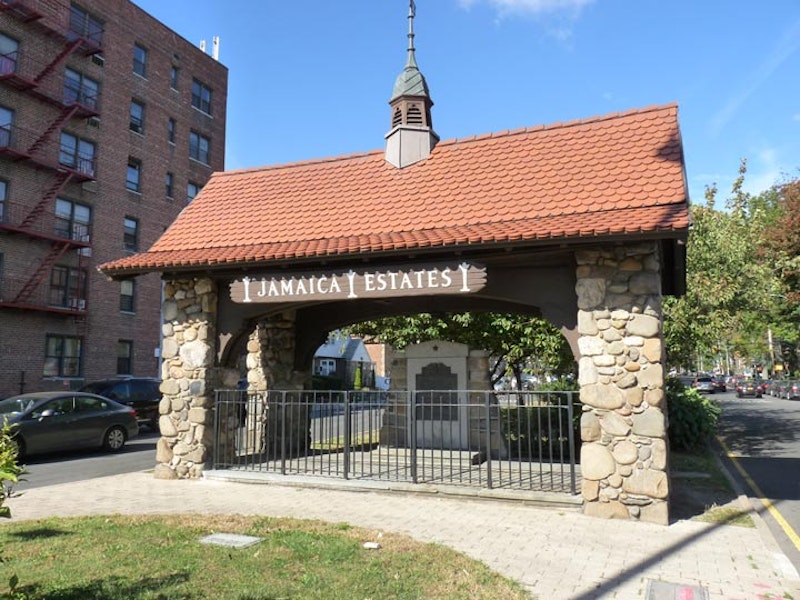 My idea was to walk from Jamaica Estates, one of two ritzy areas in northern Jamaica, back home to Little Neck. When I was bicycling throughout Queens between about 1993 and 2007, I passed through Jamaica Estates a few times, and its partner neighborhood to the east, Holliswood, very few times. I saw little of Jamaica Estates because I found it relatively uninteresting: I was seeking grittier fare at the time, and I rarely went into Holliswood because it’s unmercifully hilly. Since I do most urban exploring on foot these days, I’m no longer concerned about tackling steep hills on a bike. Therefore, Jamaica Hills and Holliswood are more attainable for me on foot than they ever were when I was on a bike! I did not follow a route “as the crow flies” but one that I knew would be more interesting based on previous trips. 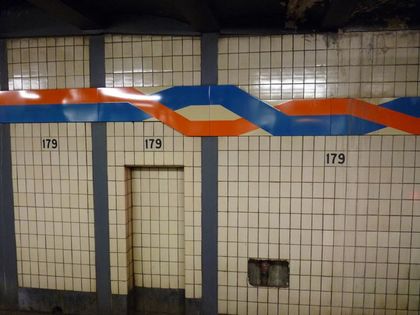 Getting to Jamaica Estates involves a little circumlocution from Little Neck in my car-free existence. It involved taking the Long Island Rail Road to Woodside, taking the #7 train to 74th/Roosevelt, and then changing to the F train to the end of the line at 179th St. 179th St. is among the most uninteresting stations in the system from a design standpoint. There are endless corridors of wall and walkway titles. A lengthy corridor, which connects the concourse with the Midland Parkway exit, is typical of IND design, which extended from 1932 to 1950, when this station was built.

Most F train stations running along Hillside Ave. up to 169th St. opened in April 1937. World War II acted as a vacuum cleaner for local and national resources, but after the war, the newly unified NYC Transit Authority opened 179th St. in December 1950; the next new station, Grand St. serving 6th Ave. Line trains entering/exiting the Manhattan Bridge, opened in November 1967. (I’m not counting the stations on the Rockaway Peninsula that became part of TA operations in 1956-1958, though the Mott Ave. terminal, opening in the latter year, can be considered new.)

One of the only hints of decor at this station is interlocking bands of orange and blue on the tiled walls. As archived photos in NYCSubway.org show, there used to be a “regular” blue or purple color band with a black border, typical of IND design. The new color bands were added during a 1990s renovation. Because subway train cars are “parked” here on weekends these decorative elements are only seen from the extreme west end of the station.

Ascending into the sunlight I was met by the handsome entrance gate to Jamaica Estates on Midland Pkwy. and Hillside Ave. A World War II memorial of JE residents is directly beneath it. Jamaica Estates, built on the northern edge of the former Town of Jamaica in the 1905-1907 period, occupies about 500 acres between Homelawn St., Hillside Ave., 188th St. and Union Turnpike. In the 1930s, it was neatly cut into two sections by the construction of the Grand Central Parkway right through it. When construction began, consisting initially of Tudor-style homes on large plots (as large as 60’x105′), Jamaica Estates was surrounded by open farms and fields, dotted by small towns and connected by wagon and farm-to-market roads, many of which developed into the pedal-to-the-metal boulevards we know today.

The project was conceived by former NYS lieutenant governor Timothy Woodruff and railroad builder Michael Degnon, who constructed the Steinway Tunnels, which today connect the #7 train with Manhattan and Queens. 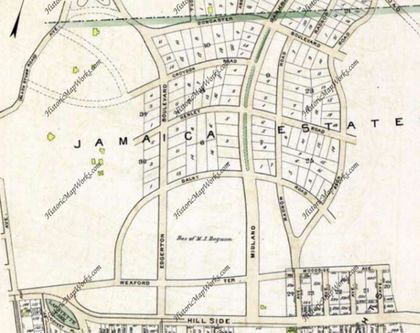 Southern Jamaica Estates, 1909. The overall layout is in place and most of the streets, named to give an association with Britain as was done in many planned communities like Forest Hills Gardens and Prospect Park South, have kept those names today. On top, Doncaster Blvd. was later eliminated by the Grand Central Parkway. 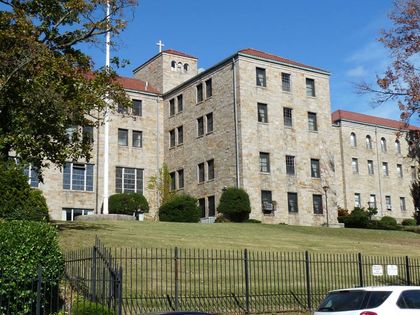 Degnon’s estate between Midland Parkway and Edgerton Boulevard at Wexford Terrace was acquired in 1923 by the Passionists, a Roman Catholic religious institute founded in 1725, to build a large retreat house; retreats are periods of religious study and reflection. Degnon’s estate house stood until 1950 when it was demolished. The property also includes a parish church attended by area residents. Degnon, a devout Catholic, constructed Jamaica Estates’ sewer and utilities systems and laid out its street pattern. 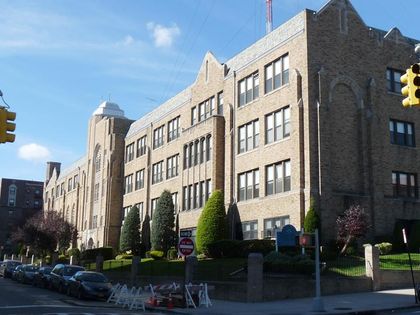 The Mary Louis Academy, Wexford terrace west of Edgerton, is a private Catholic college prep school for young women founded in 1936 by Congregation of the Sisters of St. Joseph and their Mother Superior Mary Louis, who personally selected the hilltop venue for the school. Nuns teaching at the academy reside in the Spanish Colonial building on Edgerton Blvd. to the rear of the school. 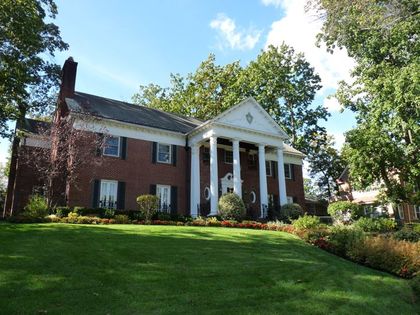 This mansion, large even by Jamaica Estates standards, at Midland Parkway and Henley Rd. was the residence of developer Frederick Christ (pronounced “krist”) Trump from 1951 until his death in 1999. Fred Trump (1905-1999) began building middle-class houses in Queens during the 1920s and built Trump Market at Jamaica Ave. and 78th Ave. in the 1930s; he sold it to King Kullen shortly after he opened it, and there’s still a supermarket on the site that’s marked by a plaque placed there by the Woodhaven Cultural and Historical Society. Trump Village, the project for which he’s best known in Coney Island, was constructed in 1963. He married Mary McLeod in 1936 and had four children, Maryanne Trump Barry, Donald, and Robert; and Fred Jr., who passed away in 1981. One of his many philanthropic efforts helped fund a pavilion in Jamaica Hospital that bears Fred and Mary Trump’s names. 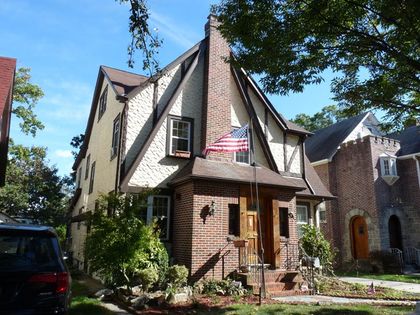 Directly to the rear of Fred Trump’s Midland Parkway mansion is his original Jamaica Estates residence on Wareham Pl. south of Henley, in which he and his family lived for four years in the late-1940s before the larger house was constructed. This is the building in which President Trump resided during the first few years of his life. 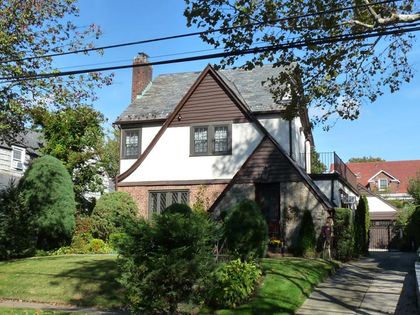 I was drawn to Charlecote Ridge and its collection of Tudors. It’s the only street in NYC titled “Ridge” even though it’s not on an especially high hill. The street is named for England’s Charlecote Park, a preserve near Stratford-on-Avon, the hometown of William Shakespeare. The name always reminds me of “chocolate” or even “chalicothere,” a large extinct mammal from the Pleistocene Era. 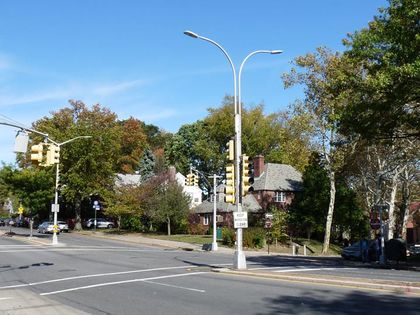 Utopia Parkway is a major north-south Queens route, running from the East River in Whitestone south to Grand Central Parkway in Jamaica Estates, where it becomes Homelawn St. It’s named for a real estate development that never panned out, and overlays part of an older route, Fresh Meadow La.

In the early-20th century the Utopia Land Company, named for the term for a perfect or eminently desirable place coined by author/scholar Thomas More in 1516, planned to build a community of co-operative apartments for Jewish residents of the Lower East Side. The company spent $9000 to build and grade streets and divide area lots. However, it was unable to acquire further funding and the plan was abandoned, with the newly built Utopia Parkway its only legacy.