The allure of forbidden literature (specifically, The Satanic Verses) to a child in a refugee camp in Doksy. 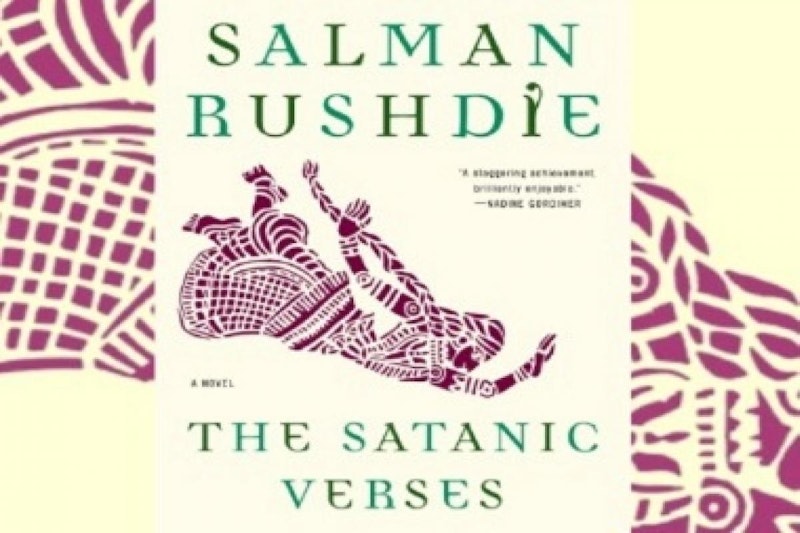 This story is true. It happened in the refugee camp, in a small Czech town called Doksy. It was summer, although I can’t be sure whether it was the first, second, or third summer in the camp. Whatever year it was, the war in Bosnia was still going on, and there was no exit, either out of the war or the refugee camp. Things weren’t that bad. You got used to it. You had to. Assimilation has many forms and one of them is one’s ridiculous and helpless insistence that the abnormal is normal.

In the camp, I knew a woman named Alma and I considered her a friend despite the fact that she was eight or nine years older than me. She had a book, which she borrowed from a woman, whose name escapes me. She was plain-looking and plump and about the same age as Alma. Her husband, or it could have been her lover (the delineations of relationships didn’t seem to matter in the camp because we all existed outside of normal time and normal space), was a gaunt-looking creature who smoked and smoked and smoked. But what Bosnian didn’t smoke?

I spent a lot of time with Alma but now, years later, I wonder why she spent time with me? At 15, I was an old soul but was suspicious why Alma bothered talking with me. Perhaps she liked exerting a sense of control over me, which she did quite often. She’d pepper her dismissal of my ontological make-up with quick compliments, which meant a lot to me as a teenager with low confidence.

Maybe it was Alma’s height, which overwhelmed me (she was 5’ 9”, and I barely 5’ 4”) and so I simply followed her cues. The older crowd she was with didn’t really want me around, and why would they want a 15-year-old girl, who’s falling in love with a new guy every week, lacking complete permanence? But did they, in their alleged wisdom, have any permanence either? Why the pretense of complete self-knowledge and awareness? The camp was a great equalizer—we were all stuck in this place, waiting for the war to end, and yet time for displays of individual superiority never ceased among refugees. As humans, we’re bound by hierarchies, even when they are useless and downright false.

Anyway, Alma borrowed a book from the plain, plump woman and her gaunt lover, and at the time of our conversation, she was in the process of reading it. It was a thick book, I noticed, which was slightly intimidating, but I was intrigued.

“What are you reading?” I asked.

“Nothing you should read,” said Alma.

There she was again—dismissive, yet perversely motherly, sending confusing emotions into my direction. I pressed her on it and she kept insisting that I was far too young for such a book, that I couldn’t possibly comprehend its meaning. She even refused to show me the title, which wounded my pride.

As we were sitting on the bench outside of the camp, I contorted my body in the most awkward direction to at least gain the knowledge of the book title. Alma turned the page and a piece of folded paper that served as a bookmark fell on the ground. She bent over to pick it up, accidentally revealing the title of this object she was so possessive of: The Satanic Verses. I couldn’t see who the author of the book was but I didn’t particularly care about that. At that moment, it became clear to me that Alma wasn’t going to let me even touch the book, let alone actually read it. I tried with my naïve persistence to change the course of her actions but failed. Her will won, although her aggressiveness may have been driven by the unspoken directives of the plain, plump lady and her gaunt, chain-smoking lover.

The Satanic Verses. For about a week, those words were on my mind day and night. I had no ideas whether it was poetry, philosophy, or literature. Of course, the fact that I was forbidden from reading this made the book more attractive and I started to devise plots and scenarios of this book that I wasn’t allowed to read. The plots in my mind ranged from dreadfully boring to completely fantastical. I’d convinced myself that the only reason I was forbidden from reading this mysterious book was because it was clearly a pornographic novel. This assumption rendered my obsession more impatient than usual and I was going crazy over the fact that I’d never be able to hold this wonder of eroticism ever in my hands!

After about a week, my obsession turned toward yet another romantic boy crush and I’d forgotten about The Satanic Verses. After Alma finished reading the book, the plain, plump lady lent the book to one of the women in the camp. The woman in question was barely literate but she wasn’t a teenager, and so in the ridiculous logic of the plain, plump lady’s mind, she was an acceptable recipient. She was someone who could be trusted with this precious object. The only problem was that during the time she had pretended to read the book, her baby’s diaper landed right on the pages of The Satanic Verses. I kept imagining mountains of both solid and runny poop covering the entire book, and this thought brought me sheer delight.