I floated on my back allowing my limbs to regain strength. 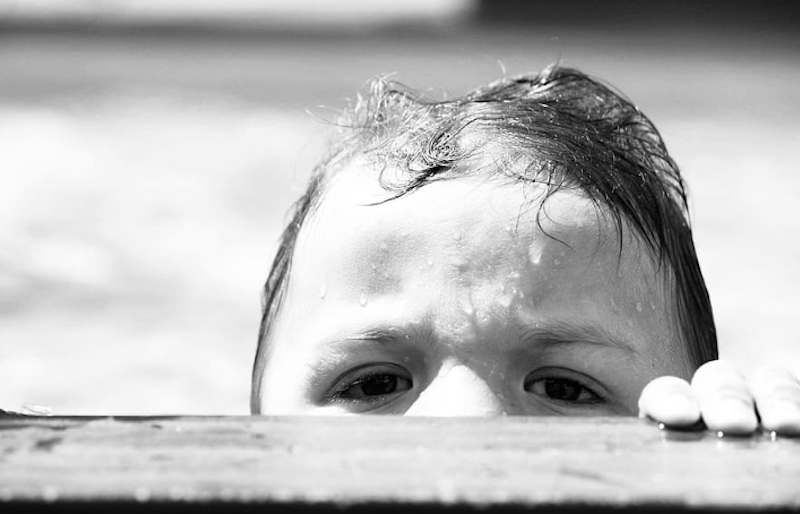 I was treading water for a half-hour before anyone noticed I was missing. My younger sister Lisa was the first to say something. She wondered why I wasn’t at the breakfast table. My brother Mark added that my bed was empty. My mom launched a search party and I heard them calling my name throughout the house. My arms and legs were tiring and I wasn’t sure how long I could stay afloat. It was only a matter of time before someone checked the backyard. I drifted on my back to conserve energy. That’s when Mark yelled out, “He’s in the pool.”

Everyone rushed outside. I resumed dog paddling. I could tell by my mom’s posture that she was furious. “What do you think you’re doing,” she yelled.

“It’s eight in the morning. Get your butt out of the pool and to the breakfast table right now.”

She circled the pool trying to get closer. I dove under and resurfaced in the shallow end.

She placed her hands on my brother’s shoulders. “Get your brother out of the pool. Understand?” Mark nodded yes.

“You can’t stay in there forever,” my mom said as she returned to the house.

My brother approached the edge. “Why are you swimming,” he asked.

“None of your business.”

He left. My little sister remained.

“Can I swim with you,” Lisa asked.

She obeyed. I floated on my back allowing my limbs to regain strength. Twenty minutes later, the screen door opened. It was my little league teammate Craig.

“Want to go to the Dodgers game?”

“Your mom asked me to come over.”

“You really have Dodgers tickets?”

Craig left. My mom reappeared with a phone in her hand, the long cord stretching into the house.

“Your dad wants to talk to you.”

She held the receiver over the edge. I knew it was a trap. She wanted to lure me close so she could pull me from the water.

“I’m not falling for your tricks,” I said.

“Your dad wants to know how you’re feeling.”

“I’ll tell him when he’s back in the country.”

“He’s gone for the summer, you know that.”

“Leave me alone,” I said. I dove under again, lingering near the drain until my mom’s murky visage disappeared. The plan was working. My mom was furious but she’d reached out to my dad. This meant they were talking again. The next visitor was Dr. Lipschitz, the psychiatrist from down the street. My mom threatened to send me to him for counseling but my dad always intervened saying, “You’re the crazy one, not him.” My mom launched into one of her tirades. Whenever they fought, I instructed my brother and sister to hide in the closet and put pillows over their ears. The skirmishes ended with dad slamming the door and leaving for days at a time.

“Your mom tells me you don’t want to leave the pool,” Dr. Lipschitz said.

“Want to talk about it?”

“When I was your age my parents fought. This is normal, though it doesn’t feel good. Do your parents fight?”

“You know what my dad calls you,” I said.

“He says you’re a vampire who takes money from people by getting them to reveal their secrets.”

“That’s an interesting view on psychiatry,” he said. “Would you like to hear my perspective?”

His cheeks flushed with anger. I laughed and dove under. Another visitor vanquished.

The day was hot and would get hotter. I felt the beginnings of sunburn on my shoulders. I strategized how to get sunscreen without leaving the pool. That’s when Rabbi Levine appeared.

He wore a wool suit with a yarmulke and prayer shawl. I could smell his body odor from the deep end.

He approached the diving board.

“You ever heard of the 5th Commandment,” he asked

“Is that the one that says you should mind your own business?”

“Moses taught us that children need to honor their mother and father.”

“You know what Jesus said,” I asked.

“Jesus wanted a son to fight his father and a daughter to fight her mother. He tried to make enemies inside families.”

“Jesus is the Messiah.” I knew this would piss him off.

“You’re a child. You know nothing,” he said.

“I know you need to act like a child to get to heaven. Jesus said that too.”

The rabbi licked his lips like a dog with dental problems.

“I got news for you kid. You can study Jesus or Buddha or Muhammad or Bozo the Clown. You’re still a Jew. And if another Hitler comes around you’ll be in line for the camps just like me.”

“When I tell them I’m Christian they’ll let me go. But you’re screwed.”

His face turned red. “Someone needs to slap your tuches.”

He grabbed the pool skimmer and tried to slam it over my head. I dove under. When I resurfaced, he struck at me again. My mom’s voice echoed through the backyard.

“What are you doing,” she yelled.

My mom grabbed the skimmer from the rabbi’s hands.

“Get out of my backyard,” my mom yelled. The rabbi stormed away.

My mom stood over me. “Why are you doing this,” she asked. She was exasperated. I felt bad for her. But I had to keep going, even at the risk of sending her into one of her depressions. She disappeared into the house. Fifteen minutes later Uncle Morty appeared wearing his standard blue Adidas sweatsuit with gold chains over his hairy chest.

“How are you, my nephew? I hear you’re tormenting your mother.”

“It’s not your concern, Uncle Morty.”

“Of course it is. We’re family. What’s troubling you?”

“You don’t have kids so you wouldn’t understand.”

He was fat and sweaty and smelled like cooked onions. But I loved him. He took me miniature golfing and gave great Hanukkah presents like a signed Sandy Koufax baseball card. I swam toward him gripping the edge of the pool.

“Our family is falling apart. If I don’t do something, mom and dad will get divorced.”

He lit a cigar and placed it between his lips.

“So this is some kind of protest,” he said. “You’re trying to get their attention?”

“When your mom and I were kids, our parents fought all the time. Your mom locked herself in the bathroom and cried for hours. It was hard. That’s when I learned what really matters in life.”

He took a puff and blew a smoke ring over the pool. I was rapt, yearning for his wisdom.

My fingers let go of the edge. I let myself float into the deep end.

“As long as you have money, you can buy your way out of any problem.”

He pulled out a wad of bills and tossed two 50s into the air. I watched as they floated into the water.

He stubbed out his cigar in the pool then walked away. He’d let me down like everyone else. I contemplated ending my stunt when the screen door opened. It was my mortal enemy, Malachi. He wore dark pants, a black leather jacket and black cowboy boots. He walked to the edge of the pool, unzipped his trousers and began peeing, a long forceful stream that nearly hit my face. I dove under. When I resurfaced, I saw a trail of red in the water from the urine-indicator dye. He smiled and then flipped me off.

Malachi and my mom had been dating for six months while my dad was in Greece. She was crazy about him. He had a thick beard and a stupid-looking ponytail trailing down his back. He rode a Harley and offered to take me on rides. I refused. One night during dinner, Malachi sat in my dad’s chair at the head of the table. We always left this seat empty when dad was away. Everyone started eating while I sat fuming, gripping my silverware.

“Eat your dinner,” my mom said.

“Listen to your mother when she speaks to you,” Malachi said.

We locked eyes. I was nearly crying with rage.

“I think your little brat is upset,” he said.

He laughed. That was the last straw. I lifted my steak knife and plunged it into his right thigh. He screamed and hopped around the kitchen like a stuck pig. My family watched in horror as blood spread across his jeans. I smiled. That’s what he gets for sitting in my dad’s chair.

“Don’t do that,” Malachi said.

He knew if he went to the hospital his wife would learn about the affair. He leaned against the counter and pulled the knife from his leg. He grimaced and yelled for a first aid kit. My mom patched him up while he stared at me with fury.

“You know what I do for a living,” Malachi asked as he zipped up his pants by the side of the pool. “I’m a deputy district attorney. I prosecute punks like you for a living. You think you’re a rebel but you’re nothing but a loser. As soon as you turn 18 and no longer have mommy and daddy to protect you, this world’s gonna eat you up. I could prosecute you right now. Stabbing someone is enough to get you 10 years in prison with grown men. You know what happens to kids like you in prison? It’s not pretty, trust me. I don’t know what you’re up to, but you’re making your mother miserable. When she’s miserable, I’m miserable. She has a blind spot. For some reason, she loves you. Your father probably feels the same way. They’re both idiots, if you ask me. Bottom line, I’m willing to cut a deal with you. If you get out of that pool, I won’t press charges. Otherwise I’m going to make it my mission to get you in a prison cell with a big hairy fat guy who loves little boys. You have one hour to make a decision. Get out of the pool or I’m filing charges.”

He was probably bluffing but he scared the hell out of me. I didn’t know the law. I was only a kid. I watched him walk into the house, still limping from the knife wound.

My body felt numb. I tried dog paddling, but my arms and legs wouldn’t respond. I became light-headed. The world started spinning. I swallowed water and started coughing. I felt myself go under. I desperately kicked and resurfaced. I lunged for the metal stair railing but was too far away. I began seeing stars. Then everything went black.

I awoke in a bed of flowers. Our gardener Ramon stood over me. His clothes and hair were drenched and he looked terrified. I spit up water and struggled to breathe. My eyes glazed in and out of focus. I fixated on a gardenia bush. The fragrance was overwhelming.

I didn’t know where my mother was.

I recognized the word muerto. It meant dead. Was I dead?

Ramon helped me to my feet. I was wobbly and my hands were shaking. He guided me into the house and sat me at the kitchen table in my dad’s chair. Nobody was around. He opened several cabinets until he found a liquor bottle. He filled the cap and put it to my lips. I swallowed the nasty liquid, immediately coughing.

He left me alone. I noticed a note on the kitchen table in my mom’s writing. I waited for my vision to clear then read the words.

Hope you’re feeling better. We went for pizza and a movie. There’s leftover chicken in the fridge. We’ll be back by 9:00. Mal was only kidding about prison. You’re too young. Love, Mom.