Lit off down Court St. through Downtown Brooklyn, sight of many memorable firsts. 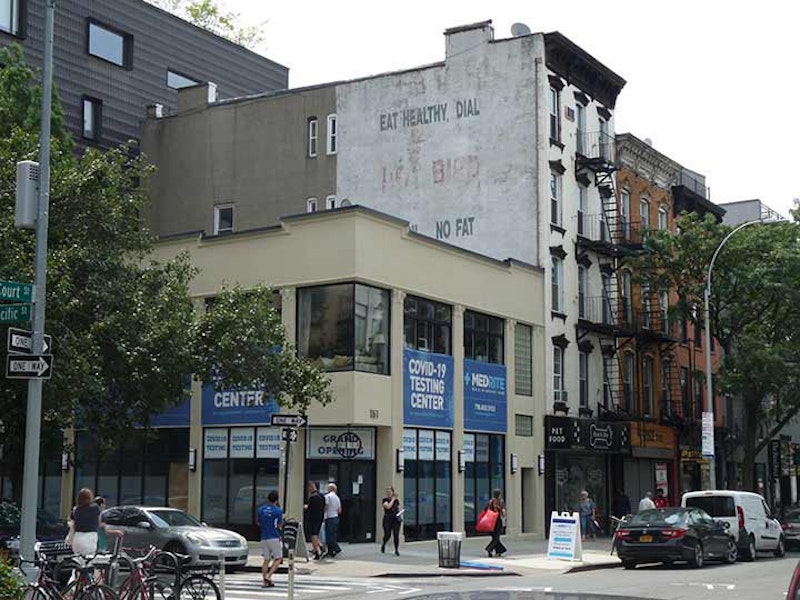 During one of the five humidity-free days in July, I lit off down Court St. in Brooklyn. Court St. runs from Brooklyn Heights southwest to Red Hook, and I frequented that area in the late-1970s and 1980s, when I went to school and worked in the area. First long-term employment, first real girlfriend, struggling through college. I never used the degree I obtained but took the basics from working on the college newspaper, the picas, points and type sizes and fonts, and worked for much of the next 40 years in type as a proofreader, compositor, copy editor and writer. I learned the basics of writing from the newspaper but when consulting the few issues I’ve saved from that time, it’s embarrassing. That doesn’t happen when I look at my website archive the past quarter century, so I perhaps reached a level of aptitude. I intend to write another book, which would require convincing a publisher to do it.

In the title image, there’s the last remaining Hot Bird sign that’s fading at Court and Pacific Sts. In the 1970s there were a string of barbecue chicken joints advertised by these wall paintings. One was on Court St. and another on Vanderbilt Ave.; the sign there prompted the opening of a bar by the same name that closed in 2018 and demolished for a skyscraper soon after. 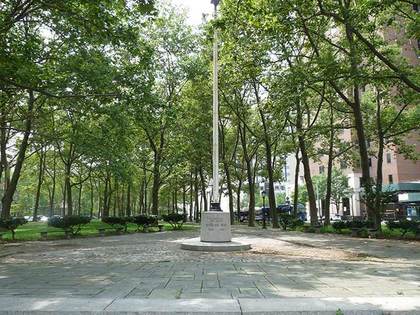 I’d never noticed that there was a Korean War Veterans memorial at Cadman Plaza West (formerly Fulton St.) when I was working at the now-demolished Brooklyn Business Library at Tillary St. in the early-1980s, and even after that. That’s because this particular memorial was installed in 1992. Korean War memorials in NYC are sparse; there’s a substantial one in Kissena Park, but it’s far from the nearest street, Rose Ave. in Flushing. In Staten Island, Richmond Parkway, which started out as local-access Drumgoole Blvd. and connects Richmond Ave. with the Outerbridge Crossing, was renamed Korean War Veterans Parkway. 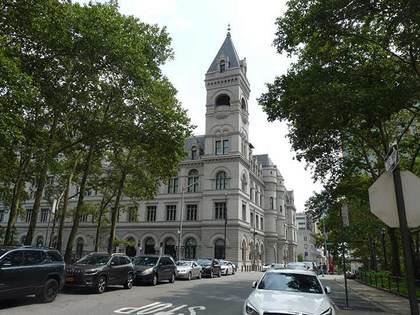 One of the most monumental buildings in Brooklyn, the Romanesque US Post Office, Johnson St. between Cadman Plaza East (Washington St.) and Adams was built in stages from 1885 to 1933, with Mifflin Bell the architect. I recall the old man visiting this post office when I was a kid. He shipped and received a lot of reel-to-reel tape recordings and was a member of a club called Tapeworms International. He had “tape pals” as far away as Cape Town, South Africa. I remember him using a scale to determine the necessary postage. Brooklyn moved its main postal facility out east to near the undefended Brooklyn-Queens border several decades ago, but this building is still busy. I wonder if a different fate awaits it, like the James Farley Building’s transformation into the Moynihan Train Hall. 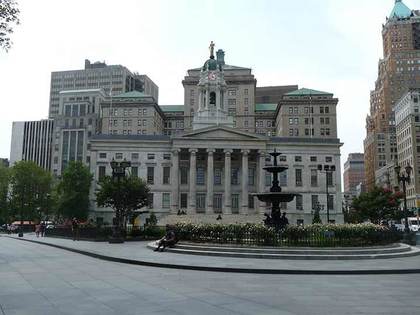 Brooklyn’s City Hall was originally built in 1848 in the Greek Revival style in Tuckahoe marble, designed by architects Gamaliel King and Calvin Pollard. In 1898 it was “demoted” to Borough Hall as the county of Kings was absorbed into Greater New York. That same year it received its present cupola and gilded statue of Justice; the originals had been destroyed in an 1895 fire. There was a push to demolish the structure in the 1930s as some critics felt its design wasn’t sufficiently attractive. The Depression and WWII ended whatever plans there were for a new Boro Hall, and in 1966 the building received designation by NYC Landmarks. The sign from the opening credits of Welcome Back, Kotter that read “Welcome to Brooklyn, 4th largest city in America, Hon. Sebastian Leone Borough President” (1976) currently hangs in the lobby of Borough Hall. And, a tile representation of Boro Hall can be found on the walls of the #2/3 IRT platform underground. 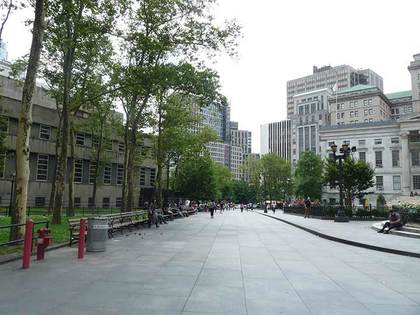 This path, adjacent to Boro Hall, is a remnant of Fulton St., which is an old road going back to the early-1700s as the British forged what they called “King’s Highway” that reached from what was the Fulton Ferry landing south along what is now Old Fulton St., Cadman Plaza West, Fulton St., Flatbush Ave., and the modern Kings Highway to Midwood in the heart of Brooklyn. When Cadman Plaza was built in the early-1950s, this section of Fulton St. was closed to traffic and turned into a pedestrian path. Creating Cadman Plaza meant closing several streets and razing nearly a hundred buildings. In addition, the Fulton St. El also ran along this section of the street until it was eliminated west of Rockaway Ave/ in 1942. Only the part that runs along Liberty Ave. in Ozone Park remains today. 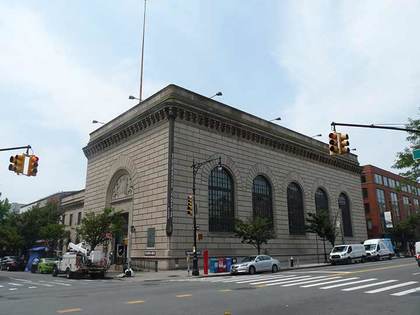 South Brooklyn Savings Institution, 130 Court, NW corner of Atlantic Avenue. Trader Joe’s moved here in 2009. On the Court St. wall, there’s a relief of George Washington on a horse, by John de Cesare, that marks the spot in Cobble Hill where Washington observed some of the Battle of Brooklyn in what is now Prospect Park in August 1776. The hill, high in the colonial era, was gradually leveled over the ensuing decades. “South Brooklyn” was once the generic term for the neighborhoods of Cobble Hill, Carroll Gardens, and Red Hook since they were located directly south of downtown Brooklyn. 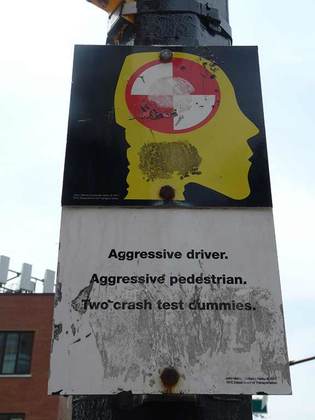 An example of the New York Department of Transportation’s “Curbside Haiku” by John Morse (both poetry and art) at Court St. and Atlantic Ave. The project launched in 2011 and can be seen on 144 signs promoting road safety throughout the city’s five boroughs. Each design and haiku delivers a safety message by focusing on transportation modes such as cycling and walking. Placed at eye level adjacent to high-crash locations near cultural institutions and schools, the colorful signs draw attention to the importance of shared responsibility among pedestrians, bicyclists and motorists. Accidents continue, so who knows if Curbside Haiku has had any effect. 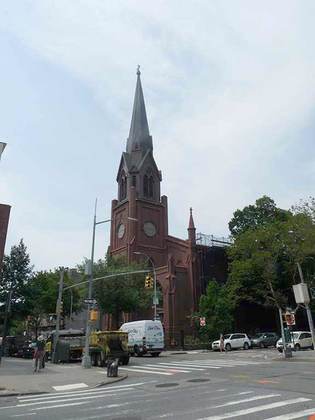 St. Paul’s Church, Court and Congress Street. Rather, St. Peter’s. Or more properly, St. Paul’s, St. Peter’s and Our Lady of Pilar Church. An old church built in 1838 by Gamaliel King on land formerly owned by a furrier, Irish immigrant Cornelius Heeney, who served as a guardian to a boy named John McCluskey, who later became the USA’s first Cardinal. While Heeney donated some of his property to this church, he also donated some of his Manhattan Island holdings so that St. Patrick’s Cathedral in Midtown could be built, and also pews and gallery fittings to St. Peter’s on Barclay St. in Lower Manhattan. Heeney had a hand in some of NYC’s oldest Roman Catholic buildings. Heeney’s interred in the churchyard here.