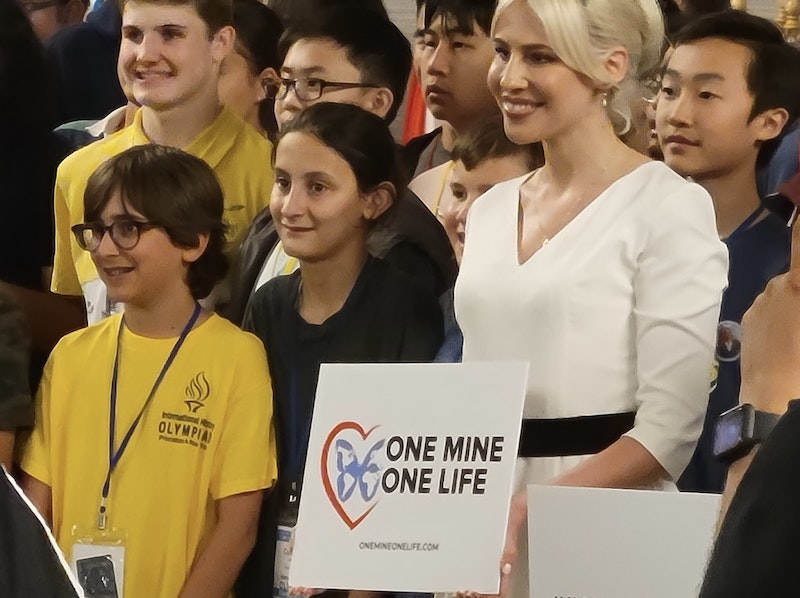 My 12-year-old son DeWitt met Princess Angelika of Poland the other night. She was a visitor arriving on short notice at the International History Olympiad, held this year in Princeton, N.J., where my son was competing. International Academic Competitions (IAC), the organization that runs this contest along with events around the world in geography and other subjects, takes a more-is-better philosophy, constantly coming up with new ideas for how kids can compete, learn, make friends, work together and engage with new people and places. At this event, there’d been an exam on Polish history, and inspired by the Princess’s presence, IAC announced there’d be supplemental questions. The Princess spoke of her campaign against landmines as a U.N. Peace Ambassador. I didn’t know Poland had a Princess.

We first got involved with IAC events when DeWitt was in second grade. He was fascinated with maps and globes, so we took him to take an exam on international geography held at a library in New Jersey. He was years younger than most of the test-takers, and our thought was to give him an idea of something he might pursue in the future; instead, he qualified to go on to nationals, and we brought him to Atlanta that year. The next year, he qualified again in regionals, and we went to the nationals in Chicago. Covid then forced competitions to go online for a couple of years, a less-enjoyable venue but one that enabled the operation to survive the pandemic. This year, in-person event returned, including nationals in Orlando. Over time, my son expanded his competitive subjects, focusing on history as well as geography, with some science contests as well.

The international-level events are often held outside the U.S., though not this year, another result of the pandemic’s complications in organizing in-person events; however, the next few years have events scheduled in Austria, Ecuador and other countries. There was an International Geography Competition in early July in Burlington, VT, which DeWitt attended with family as I stayed home with Covid. The History Olympiad in Princeton has brought competitors from around the world, including representatives from Iraq, Kazakhstan, the Philippines, Vietnam and other far-flung places. The age range at such events is typically from elementary school to college, and there are occasional opportunities for adults to compete as well, such as in family quizzes or an “open division” on exams. David Madden, the New Jersey–born executive director of IAC, founded the organization with his earnings as a Jeopardy! champion.

Competitions take multiple and evolving forms. There are buzzer events, in which a question comes as a paragraph that’s read aloud, and the competitors buzz in when they think they know the answer. These include “bees,” which are individual competitions, and “bowls,” wherein the competitors are on teams. Camaraderie is valued, including in individual competitions, and team competitions provide crucial experience in cooperation. My son’s been on teams representing his school, Primoris Academy, and also ones representing New Jersey. Written exams and board games are other ways in which competitions are organized. Additional formats include “scrambles,” where questions focus on a specific topic announced days earlier, and “blitzes,” where the topic isn’t known until just before competition begins. “Simulations,” in which the kids engage in role-playing how historical events might’ve gone, are a new wrinkle.

One can’t get far in IAC events just by memorizing a lot of facts. Understanding the contexts and relationships among facts is crucial. So is a degree of self-control. It’s important to know when to venture an answer, based on one’s degree of confidence in the info and also on the rewards and penalties involved. In standard buzzer competitions, you can interrupt the question in progress by buzzing in, but the third such interruption, if giving a wrong answer, brings negative points. In special competitions such as playoffs, different rules may apply, where, for example, you get more points the earlier you buzz in with a correct answer. Kids may file a protest if they think a question was flawed or judged wrongly; parents and others on the sidelines are under “tennis rules,” where the audience isn’t supposed to talk or agitate for an outcome. Some teams have coaches who’ve helped them prepare and might be involved in rotating players in and out on some competitions, but competitors have to make their own decisions as the questions fly.

Success at IAC events can bring various medals, plaques, trophies. At the International History Olympiad, the winners of an event stand on a podium waving their state or national flag, with the top winner’s state or national song playing. While such awards are gratifying, much of the pleasure in these competitions is just in the kids’ meeting others who share their interests; in knowing that their fascination with, say, the history of Poland, or how Alexander the Great strategized, or obscurities of sports and entertainment from decades past, is something that others can and do share.