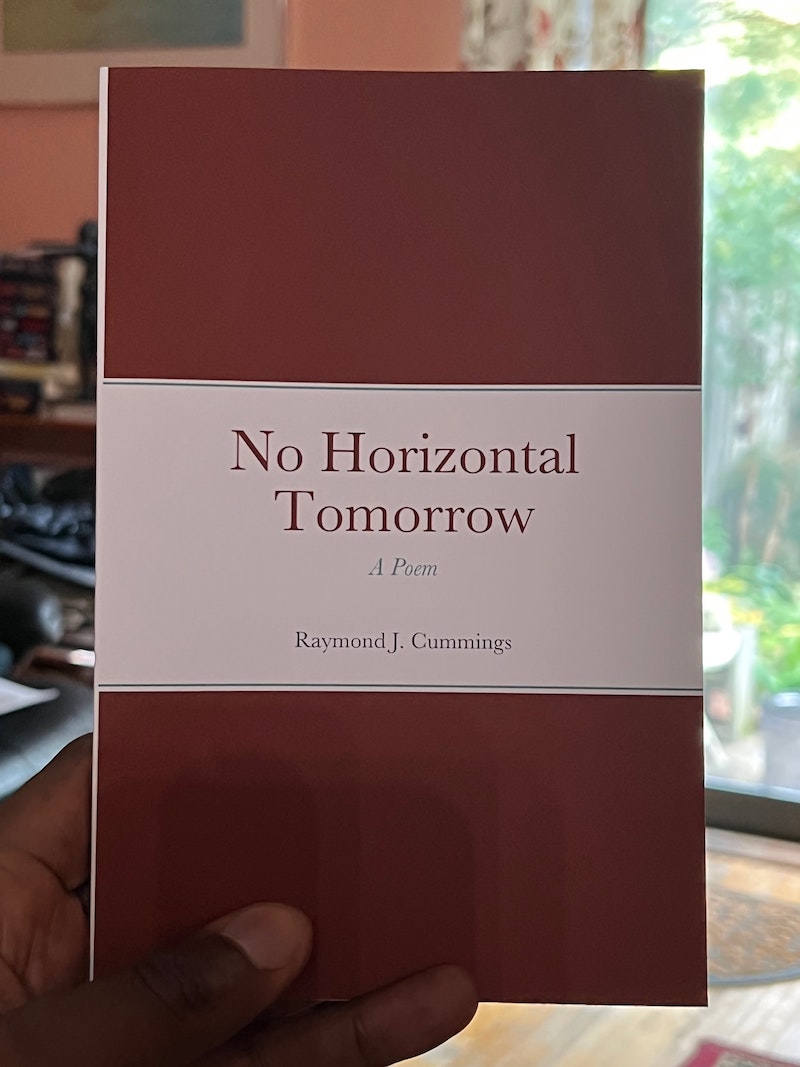 Not the house you heard about, I’m talkin’ bout —

An eerily precise portrait of Morgan Freeman, his expression on the cusp of curling into a saintly smile, surveying the steps leading down to the main level.

A housecat contemplating an oriole perched in a molting palm tree; the oriole has its head cocked, diffidently, in another direction.

A poster for a concert doubling as its illustrator’s exploratory sketch session — the line work in black Sharpie, the figures densely shaded with pinks and purples, canary yellow splotches erupting at apparent random. It is also, somehow, a collage of very active superhero comic book scenes rendered with a rough, underground comix flair. The block lettering bulges out.

A trio of abstractions, Kente cloth-clad, posing fluidly in place — are they dancing, or celebrating? — within a frame near the kitchen. Mere feet away: the ancient Egyptian version, on a papyrus square that isn’t a papyrus square.

A quilt, its off-brand “L”s and near triangles and almost squares pieced together like a completed puzzle, a myriad procession of patterned blues and purples and stained whites, flowers, leaves, petals, and vines, intensities and recessions.

A still life of yellow wild flowers, overflowing from a teal, handled jug.

A cloth print of the island of St. Thomas, as if sourced from a satellite equipped with a night vision filter, the main island and its satellites ringed with color gradations intended to indicate relative marine shallowness (bays, quays) or mean height above sea level (mountains, rises). It is both tranquil and mildly deranged.

A herd of rabbits scampering across a hilly landscape, flowing from the left down, then to the right and circling up to the top, where a man with a cane leads a camel that a woman is riding, in a scene of pointedly forced perspective. The sky in this painting seems especially painted in a non-figurative sense, its blues too blue — a precious mural sky that’s a mere sliver of the entire canvas – while trees gnarled and foal dot the hunter green and dun hills dominating this view. It is difficult to overcome the impression that these rabbits are attacking these travelers, that this is the prelude to some grisly, fabled massacre.

A man and a boy, side by side, stare straight out of a woodcut. The man, goateed, is reserved; he wears glasses with rectangular frames.. The boy – whose glasses frames are curved – is far more exuberant, flashing a toothy grin.

A gauzy netherworld floating somewhere between Heaven and Earth, illuminated by a benevolent sun next to a pastel rainbow and a vanishing moon, nestled within a cool, chromatic haze that glows like the inside of an oyster shell.

A rectangular window looking out upon a color run or the crescendo of a psychedelic symphony, impossibly sensuous paint presented in specks and flicks and squiggles and daubs, dense, layered, four-dimensional — or a leisurely drive-by paintballing pulled over an afternoon. This is forever a new painting, in a constant state of self-reinvention or reinterpretation, with different aspects jumping out each time: deep mystical blues and purples, jagged little streaks of crimson, pensive sunset oranges, scattered punk pinks, greens sprouting everywhere like fresh weeds after a rain shower. Stare long enough and a dark, crooked ridge reveals itself beyond the swirling pyrotechnics, a wavy but unmistakable implication of something stolid and foundational, a ridge line or towering, authoritative cluster of trees. To the left, a mirror.

A nautical scene where a cruise ship, a sailboat, and a shipping vessel idle as fluffy clouds and an ethereal sky look on, impassive.

A circle of children, crudely detailed and multiculturally representative, holding hands in a white-gray whirlwind. They have heads but lack faces; this painting looks like how Boards Of Canada covering “It’s A Small World, After All” might sound.

A small canvas where, while green smears dominate, yellows lurk close to the middle. This work should be titled “Chlorophyll study No. 9.” Words and phrases were pasted over its surface to form a haphazard, descending poetry, concluding with: “panting towards the sea.”

Question: How free are you?