When Father rose from his recliner... 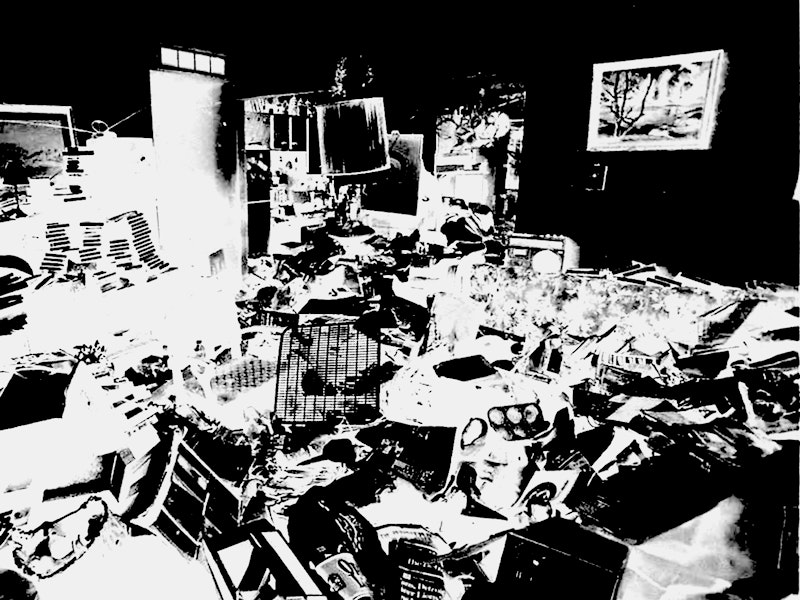 Father rose, hobbling, from his recliner nestled into the pile of trash of God knows how many years in the accumulation. The TV was blaring, supposedly because of the hearing lost in his right ear in the war. It was just noise. He was always seen with his forehead on his right-hand fingers, a thousand-mile stare into what we rarely inquired. Brilliant in his youth, anyone seeing the screen would have thought him an idiot. He wasn’t really watching it, for nothing was news, and anyone there to entertain was an idiot.

Any laughter he spent was in the cynical spirit of the positive-delusionist: life’s misery, and we invent lies about its having some good in order to tolerate it. This was quietly assumed, and permeated all contortions anyone experienced if they were involved in conversing with him. He claimed the only thing he would’ve struck one of his sons was lying, and this was legendary with regard to a sometimes paraded anecdote about him and his oldest. Something seemed noble about holding this principle. He struck his youngest once for calling him a jerk—father later apologized with tears, probably volitional, with an admonition readily agreed upon by the generally amiable teenager.

He rose with a sigh, in the amplitude and the quality of his surroundings—a natural sigh, not forced or exaggerated, like a bad actor. The basement door hid a sealed can of calcium carbide nuggets. They used to power the light of the miners’ head-lamps. Seemingly soundless, he retrieved them, went to the front yard to place them in a mole-hole, added water, covered it with a rock—and then, having waited some time, he removed the rock and dropped in a lit match. All a familiar process—there was no need for us to see the mechanics of it. The ground shook with a dull rumble. Returning to his place, he rested the side of his forehead as before, sighed, and jimmied his foot briefly on the recliner’s footrest.