A graveyard shift gives the author time to explore. 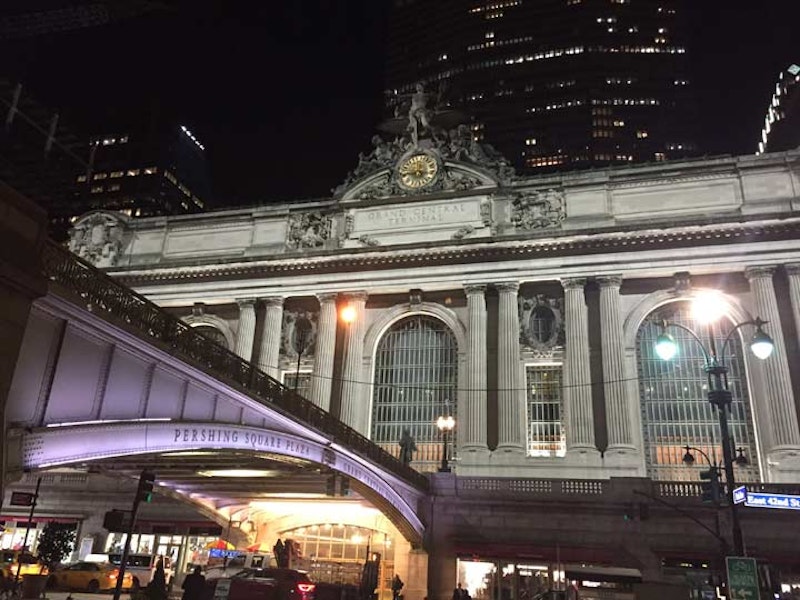 I recently worked for six weeks in the Grand Central area in midtown, overnights from midnight to eight a.m. I liked the money, but that was about all. If you’re not used to an overnight schedule, it’s a nightmare. I despised having to leave the house at 10:40 p.m.—I’ve been a daytime guy for nearly 30 years since my last overnight gig—and going to sleep when I got home at nine a.m. was an issue. Medication after medication, from Melatonin to Unisom from a sweet-smelling “all-natural” golden-colored pill were tried, with little effect, except for making me extremely groggy after whatever little sleep the pills provided. Sometimes, they didn’t provide work at all; the bulk of my sleep came on the weekends, when I switched back to a nighttime sleep schedule and went under quite easily, as I have since the temp job came to an end.

The hours did give me the opportunity to get a little nighttime photography in, mainly of the Grand Central area, and the terminal itself, on the iPhone camera (whoever invents a point and shoot digital camera that works at night will quickly become a millionaire). For the photo above, I set up on Park Ave. (now a pedestrian mall between E. 41st and 42nd Sts.) and took aim at the majesty.

There have been two Grand Central Terminals where the current one stands on E. 42nd and Pershing Square. Commodore Cornelius Vanderbilt had acquired control of all railroads going into New York City by 1869 and set about building a vast depot on 42nd St. and trainyards stretching up 4th Ave. north of his new terminal. He built there since steam railroads had been banned south of 42nd (in fact, remnant of the old New York and Harlem Railroad can still be found under Park Ave. between E. 32nd and 39th Sts., an old railroad tunnel long converted to auto traffic). The present magnificent complex replaced the old one in 1913 and is the hub of a vast facility containing a passenger station, power plant, steam and water mains, luggage storage and dozens of track loops and layup tracks. Accounts vary on how many levels there are and how deep they go.

I’ve never heard, “meet me at Pershing Square.” As a rule when I’m meeting up with people in this part of town, we usually meet at the iconic clock in the center of the vast marble floor at the center of Grand Central Terminal. Nonetheless the section of E. 42nd St. that’s overshadowed by the Park Ave. Viaduct, and formerly intersected by Park Ave. itself is officially known as Pershing Square, the name emblazoned on the iron bridge that crosses E. 42nd.

General John Joseph Pershing (1860-1948) was the leader of the American Expeditionary Force in Europe when America entered WWI in 1917. Previously he’d served in the so-called Indian Wars, fighting the Apache and the Sioux from 1886-1890; the Spanish-American War in Cuba in 1898 and later in the Philippines in 1903 after which President Roosevelt elevated him to brigadier general; he fought revolutionary Pancho Villa when he raided the American Southwest in 1916; and the Germans in WWI. It can perhaps be said that he led troops on more continents and against a greater array of opponents than any other previous American commander.

When the Park Ave. Viaduct was constructed in 1919, the name of the still-relatively young Pershing was bestowed on its crossing over E. 42nd St. 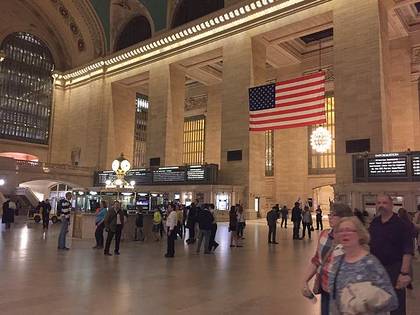 Vincent Scully (the architecture scholar, not the longtime Dodgers broadcaster) said of Penn Station, “One entered the city like a god. Perhaps it was really too much. One scuttles in now like a rat.” Other than the rats on the nearby Graybar Building awning, there aren’t a lot of rats immediately apparent here, but undoubtedly there are rats in the enormous basement. Grand Central Terminal (railroad buffs get so incensed if you say “Station,” that you’d think you were Roseanne commenting on Valerie Jarrett) has held forth here for over a century. It has occasionally been bowed, but never really broken. After its restoration in the 1990s, it has become a lunchtime attraction for people who never take a train issuing from the station.

Grand Central Terminal once served both The New York Central and New York, New Haven and Hartford Railroads, reaching a large swath of the country. Today, in a somewhat ironic turn of events, Grand Central Terminal serves only commuter railroads while the much more downscale (since 1964) Pennsylvania Station serves nationwide routes. The terminal was in danger of demolition in the 1970s before a group of preservationists led by Jacqueline Kennedy Onassis helped save it. After a lengthy period of neglect, it has been undergoing renovations since then, first the interior in the 1990s, and the exterior in the mid-2000s. 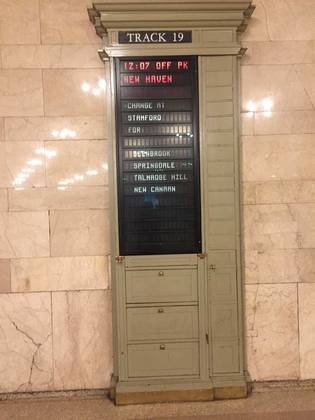 GCT’s track indicators are still blissfully “flippy boards” and not the computerized anodyne variety installed at Penn Station years ago. In fact, they still have reminders of an even older method of indicating station stops. Note the drawers toward the bottom of the stanchion: they were used to hold the various plaques on which the station names were printed before the track indicators became video boards or flippy boards. There was once a chain-and-curtain system inside the track indicator, and when the plaques with the names of the stops were placed in correct order, the trainmen (they were almost always men) rolled them into place by yanking on pulleys. The system was manufactured by the long-gone National Indicator Company in Long Island City. 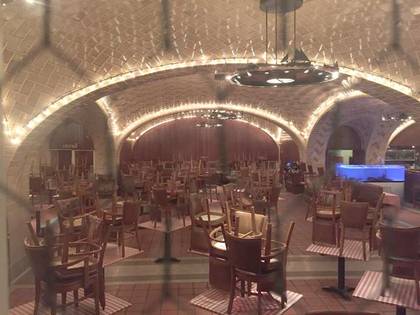 The Oyster Bar is GCT’s most famed restaurant and has been here since the present incarnation of the grand train hall opened in 1913. From colonial times, NYC’s surfeit of oysters and shellfish made them a popular delicacy and oysters were consumed here at the same rate as other popular NYC treats like knishes or Nathan’s hot dogs. By the early 20th century the waters surrounding NYC had been “fished out” of the largest species, and the harbor was increasingly polluted. Nonetheless the Oyster Bar has persisted, importing the shellfish from other states. The Oyster Bar’s fortunes waned as the Terminal’s and NYC’s did from deferred maintenance in the mid-20th century, and wasn’t considered a prime dining destination. In fact, it didn’t really specialize in seafood and was in severe decline until Jerome Brody, who also operated the Four Seasons, took command in 1974 and brought back the old glory, which also included an architectural restoration that highlighted the primacy of its interlocking roof tiles, a trademark of the father and son Guastavino firm. 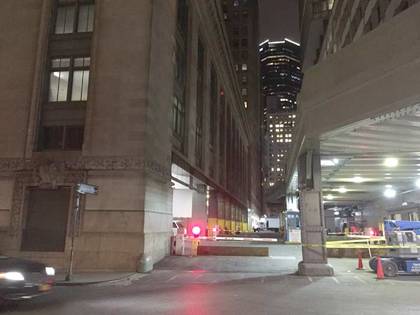 Depew Pl. came into existence along with Vanderbilt Ave. in 1874 when the first Grand Central Depot was constructed on 42nd St. and Park Ave. in 1874. Vanderbilt Ave. was named for “Commodore” Cornelius Vanderbilt, who developed the NYC & Hudson River Railroad Company and built the original depot.

Depew Place, meanwhile, was named for an obscurer figure, Chauncey M. Depew (1834-1928) New York Secretary of State and President of the New York Central Railroad. Commodore Vanderbilt convinced him to leave his Japanese ambassadorship at age 32 (he was a gifted public speaker) and work for him at the NYCRR, and he later headed it as president.

While it once ran on the east side of GCT from E. 42nd to E. 45th Sts, Depew Place has been truncated back to its present ignominious status since the Post Office was constructed in 1909 and Park Ave. was bridged on a viaduct around GCT and the Helmsley Building in 1919. The city has started marking it again after decades of not doing so.