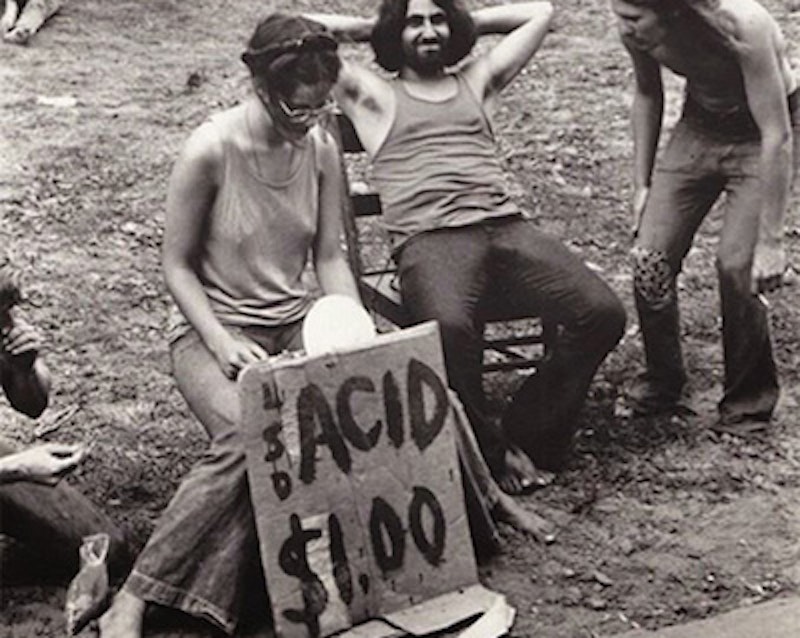 Timothy Leary’s Dead. The opening line from a song by The Moody Blues in those madcap psychedelic 1960s. Leary was a guru in the counterculture rebellion and a holy goofball. There was so much crazy music in the 1960s and 70s that attempted to be part of that drug-induced youth movement scene that much of it was mere imitation. Bands like the Partridge Family tooling around in a painted up school bus a la Ken Kesey’s Merry Pranksters. The TV sitcom series The Monkees, The Beatles’ Magical Mystery Tour and the Yellow Submarine movie. The Scooby Doo cartoon series, where the main characters cruised in a corny lime-green van with hippie flowers or the many painted-up VW buses that roamed the country from Haight Ashbury’s freak central to the Woodstock music festival.

The recent death of Tom Wolfe brings it all back in the 1968 novel The Electric Kool-Aid Acid Test, a testament to those times and the key players who participated.People like Neal Cassady, Allen Ginsberg, and The Hells Angels. I don’t remember reading it… probably because I was too busy tripping. You’ve heard that time-honored saying, “If you remember the 60s, you weren’t there.” The Grateful Dead cornered the market on trippy acid earth mommas and hungry freak daddies dancing in the mud like whirling dervishes at countless outdoor festivals. Spaced-out lunatics in tune with self-absorbed extended guitar solos thumbing collective noses at the powers that be. Rejecting the past ways of American life while pondering belly buttons in the way out, far out world. Daring to be hip to the nothingness of existence. Watching the pretty rainbow colors and tracers of movement if only in our heads to the drug culture that engulfed us. Stupefied by the grim realities of war, racial injustice, and corporate greed.

Even more bizarre in the evolution of LSD is its clandestine use during the Cold War. Introduced by ex-Nazi scientists and CIA operatives in military experiments. Specifically Project MKULTRA tests that began in the early-1950s and continued for a decade or more. A lot of that evidence was destroyed when it was discovered that our government was dabbling in mind control, brainwashing and psychological torture. They thought it could be administered as a truth serum. Enough documentation survived to reveal that some of the greatest diabolical scientific minds of the fallen Third Reich were recruited by the USA to assist in this spy vs. spy attempt to weaponize LSD and use it against the old-school Soviet Union.

The government insinuated that Russia would lace our water supplies with LSD. Talk about weird mind fucks. Is it too ludicrous to mention we have a neo-Nazi regime in place here today with ICE and other jack-booted thug organizations/paramilitary police groups? It’s little wonder during WWII the Germans were all strung out on amphetamines. Hitler was a junkie. We had Benzedrine inhalers for our troops. War and drugs, a strange combo.

There’s fascinating documented information out there that’ll make your head spin. Too much stuff that links the past to the present through drugs. But hey, we’re too groovy to let drugs be associated with the government or the military. Even though that’s where the bulk of them comes from in the first place. But LSD was one of those anti-authoritarian things that gave us altered states of reality. Depending on your definition of reality. In 1969, Art Linkletter’s daughter Diane committed suicide jumping from her sixth floor apartment window. It was rumored that LSD was the culprit that led to her death. She thought she could fly, or worse, she was having a hallucinatory flashback. But the story was never proven as fact and became urban legend, A cautionary tale of the dangers of drug use and abuse. Art Linkletter was a semi-famous TV show host who exploited the foibles of children in a show called Kids Say The Darndest Things. He also placed himself within the Nixon administration as an anti-drug spokesperson which gave rise to the war on drugs. Around the same time that Elvis Presley met with Nixon to become an honorary DEA agent at large.

To elaborate this point simultaneously John Waters came out with the film, The Diane Linkletter Story. Divine played the role of Diane Linkletter. It was a short freakadelic farce poking fun at the institutions and misguided parental authority that drove Diane Linkletter to jump out a window in the first place. In the film, as in all probability real life, her parents confronted her, condemning her friends as dirty hippies that took drugs and didn’t wash their hair. As punishment she was forbidden to continue seeing her hippie boyfriend, driving her to suicide.

Today people are micro-dosing acid daily to have an edge on their tasks at hand. They’re using hallucinogenic drugs to help in psychiatric therapies. To ease the suffering of terminal cancer, etc.… marijuana is almost legal too. I never thought I’d live to see the day. The night I ate acid and went to the premiere of The Exorcist over 40 years ago. Or was it Fantasia? What a trip. It’s all great, except for the neo-Nazis, paranoia, fear, and panic. Let it all hang out baby! Doing your own thing in your own time.