The term is condescending, dismissive, and oh-so-Internet-five-minutes ago. 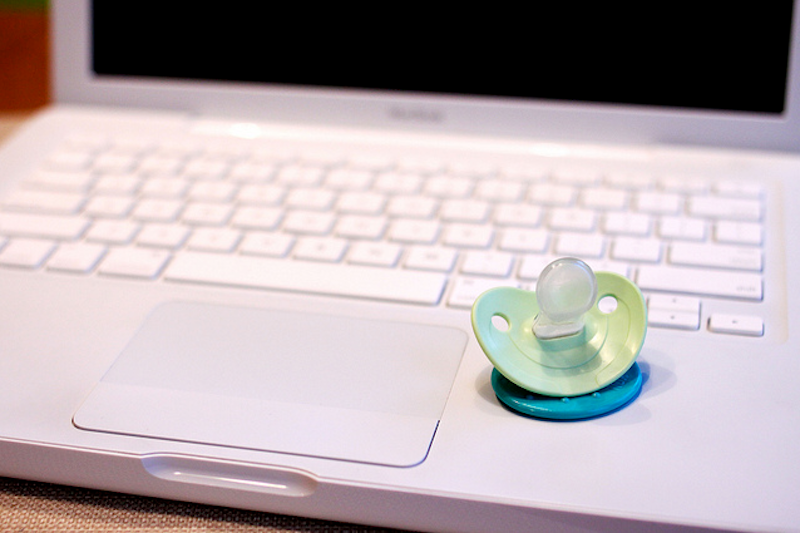 Listen, before I open up a jug of haterade on mommybloggers, let me just admit that I’ve been what some refer to as a mommyblogger myself for the past five years. Before that, I had a newspaper humor column, which is like a mommyblog except your hands get ink on them when you read because the words were printed on paper and there was no Facebook "like" button because there was no Facebook and no Internet. I’m old.

Anytime someone has referred to me as a mommyblogger, it’s made me cringe. It’s not a “community” I’ve been successful at being a part of. Here’s why.

1.) I hate the term itself. I’m a writer. A journalist. A plain old blogger. Call me anything, anything but a mommyblogger. I agree with Rachael Herrscher in this Forbes article and Cecily Kellogg (a blogger I adore) in this Babble piece. The term is condescending, dismissive, and oh-so-Internet-five-minutes ago.

2.) Many mommybloggers are secretly bitches. I’ve attended and spoken at a number of national blogging conferences, and I can’t tell you how many times I’ve been stunned to meet someone I thought I “knew” from reading online only to discover that she is either a complete bitch in person or has the exact opposite personality she exhibits online. Apparently, you can fake a personality on the Internet to get lots of advertising sponsors because that’s what blogging is all about, right?

3.) Ohmygod the Money. You can’t use the terms “clusterfuck” or “cuntasaurus rex” if you’re a mommyblogger, in case the advertisers don’t like it. Because getting advertisers, and making deals with public relations agencies, and getting free swag from sponsors is why many people blog.

4.) They Aren’t Writing Anything. Again, I’m old school. I believe if you’re asking someone to come to a website to read something, you should be writing something there. Not running crap other mommies send to you about how they’re secretly drinking wine while making homemade play dough, or posting a picture of your dog or kid with a caption.

5.) They Do It Like It’s Their Job. Being a mommyblogger like some women do it? Is a full time job involving going to blogging conferences all over the country in a revolving cycle. There are women who go to a minimum of five-six conferences a year, all across the globe. Is there new information about blogging at each of these conferences? Maybe. But more often than not, people don’t attend the educational sessions anyway, just the sponsored swagfest parties and other social events that essentially amount to popularity contests.

6.) Seriously, Shut the Fuck Up About Your Kid. How many stories does the Internet need about co-sleeping, breast feeding, immunizations, organic baby food and eco-friendly infant products? How many Facebook status updates about school and sleep and poop and sicknesses and sports and tween angst? I’m constantly surprised at posts written by mommybloggers about how they can’t write about their kids anymore because their kids asked them not to. Oh, you built an entire blogging business around writing about your kid and now your kid is a tween or a teen and wants their privacy? Oops! Yet you still blog about them for the money. They’re going to write a memoir about you one day, and I’m totally going to read it.

7.) I’m Just Jealous and I Don’t Fit In. Yeah, probably. I don’t get invited to the momblogger meetings. Not that I want to hang out with some of these condescending bitches anyway. I’ve seen how they act at the conferences. It’s like high school all over again.

8.) Too Few of Them Are Actually Cool Moms. Are there good blogs written by women who happen to be mothers? Absolutely. Some have tons of web traffic, some have very little, and that’s not always a measure of the quality of their content, but more likely whether Twitter has gifted them with placement on the “suggested user” list. There are women writing amazing things out there every day. Blogging has given women a voice we never otherwise would have had. But the good voices are hard to hear above the masses of clutter.

9.) So Many Are One Trick Ponies. There are many mommybloggers who have found their niche audience and their exact post style and they stick to it. Read the last 50 posts they’ve written and they all sound the same. Their readers are just sheep in the flock, dutifully commenting/liking/sharing the same post formula over and over until the end of the Internet, amen.

10.) The “Mommy”ness. Motherhood is only one aspect of our lives as women, and I’m not sure it’s the one that should define us. There’s nothing wrong with writing about our experiences with our children as mothers. I probably write about my kids 10 percent of the time. I just have never been a fan of entire blogs dedicated to all things “mommy” in the same way I was never a big “play group” joiner when my kids were little.

The intelligent, funny, creative women (some moms, some not) out there who write online deserve to be read and followed and shared. I know and appreciate and love the work of many of them myself. But for many “mommybloggers,” I just wonder what they’re going to write about when their kids are gone.