Tits and Beer in Tinytown

We wanted to see naked ladies. 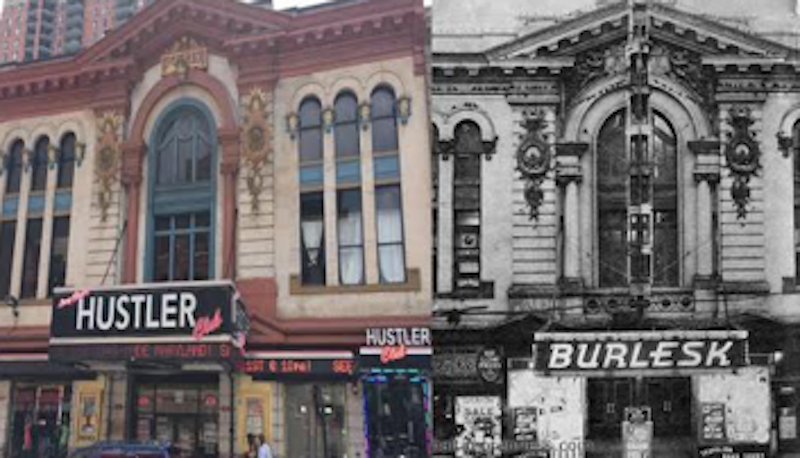 We went to the Block as soon as puberty kicked in. It was then a three-block stretch of strip clubs and sex shops located on Baltimore St. next to Police headquarters and City Hall. Now it’s a creepy shadow of the former burlesque venues and nightclubs. By the time we visited in the early-1970s the former glory was fading. Drugs plus other criminal activities took over. We went long before we were of legal age to drink. To ogle strippers. There was one night we hastily guzzled Everclear in the storefront doorway of the Joke Shop. We were coughing and gagging as we stumbled down the street attempting to look cool. We walked the gauntlet of the Block to peek and peep inside nightclubs open doors. We wanted to see naked ladies. To live out erotic dreams of boyhood fantasies.

The doormen would chase us away yelling, "Come back in five years. Come back when you got hair on your balls.” Their main job was enticing men into the clubs.  "The show is just starting gentlemen, step right up. Right, this way. We got the best shows on the Block. Come on in." There was nothing to see. The doors are covered behind with curtains. Sometimes dancers would stand outside the entrance on dead nights smoking cigarettes. They’d stroll along the street to grab a quick pizza slice or sausages from Polock Johnny’s.

Years later, I went to the Block to watch girlfriends dance. I spent many nights and occasional afternoons at The Midway bar, in the middle of the Block. The Midway is the only bar that has no strippers except for the random jukebox dancer. They hung out before and after dancing shifts. On the walls of The Midway, there were vintage photos of strippers from the 1940s and 50s. The likes of Blaze Starr or Gypsy Rose Lee. Blaze owned the burlesque bar Two O’Clock Club. The famous days are now infamous, when live music blasted out the doors. I played music in a few bands there too. The Flamingo Club was a basement bar connected to the strip club where bands played on weekends. Rock ‘n’ roll goes well with strippers.

In the early-1800s, the Fells Point area was called the Hook. Like many port towns, it has a geographical hook of land that juts out in a deepwater harbor. These places were notorious for sleazy waterfront bars, bordellos, and crimping joints. Crimping is the nefarious practice of drugging sailors and seafaring men who kidnapped them. Shanghai onto ships against their will. Typically, seduced by women of ill repute into these dens of iniquity.Taken while drunk and drugged, relieved of their money and valuables. Names like Captain Hook and hookers are associated with these ports of call.

Fells Point was no exception to these waterfront dives. Places like Hollywood Show Bar and The Ritz were a couple of the joints along Broadway. There were others, but The Ritz was one of those places I frequented with my long-deceased bandmate Thom Bomb Hickling. We’d walk to The Ritz from a blues club on Aliceanna St. called the Full Moon Saloon. We went during breaks to have a drink and watch the ladies dance. Once I even worked as a doorman for free beers at Mike’s on Broadway. It was never a strip club. Although I witnessed more than a few flashers lift their tops and shake it or drop their pants and smack ass to razz some drunk at the bar.

In retrospect, beer and boobs is an American pastime like watching a ballgame or playing the ponies. It’s no longer acceptable behavior in many circles. A cheap aphrodisiac for working-class John and Joe letting off some steam after a hard day at work. Have a few beers, a couple of shots, and daydream about what could’ve been.

The number of titty bars in Baltimore and elsewhere has dwindled to a precious few today. In their place, the mega-industry supersize sexy gentleman clubs as Hustler and Rick’s Cabaret have taken over the scene. You can see them dotted along Route 40/Pulaski Highway and across America too. Just a hospitality service industry. Somebody’s lame idea of what politically correct consumerism crap should be. Even strip clubs were classy once upon a time.