This Is a Nightmare

Brian Powell has a bad dream, The Chief and Oscar Berkman talk race relations, Emily Twiggs turns in her story, and Rod Hugedork’s simulcast comes to a shattering conclusion. 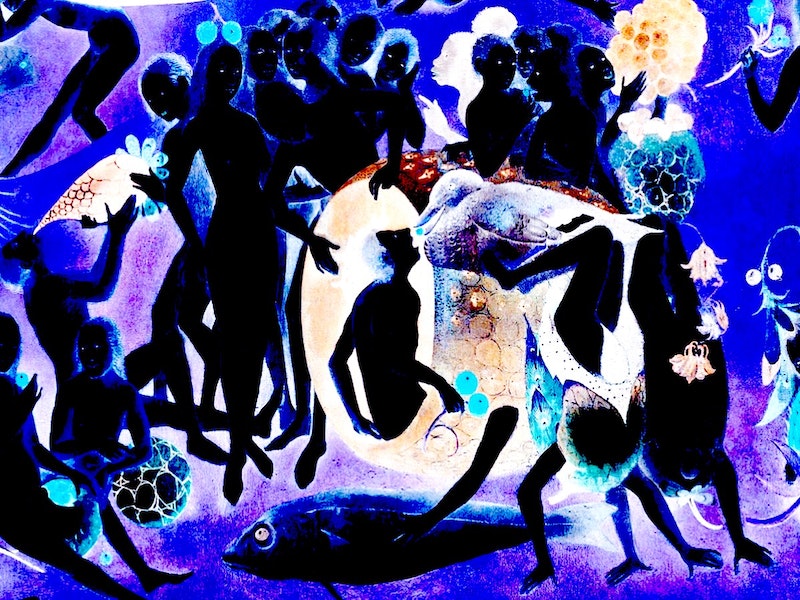 Servais sat up with a loud groan, burped and, swinging his legs over and letting them dangle off the side of the bed, turned to face me. He lifted his head, a bleary quality to his hazel eyes.

“What do you think about evil, Kid?” he asked matter-of-factly.

I wasn’t sure whether this was rhetorical or if he wanted an actual answer or what, but when he raised his eyebrows during the lull, I turned over on my side, propped myself up on an elbow and said, “Well, I dunno. I guess it exists, but how do we quantify it? Or, uh, qualify it, for that matter?”

He’d bowed his head by then and was sort of swaying from side to side with his eyes closed. “No,” he said so softly I wasn’t even sure he’d said it at all.

“No!” he yelled suddenly, beating his fists on the mattress, and his eyes shot open and a vein swam under the skin at the corner of his forehead. “What do you think a serial killer does when he’s had his fun? Huh? Think he goes and gets on his knees in the middle of a big-ass pentagram, says a prayer to Satan? Maybe sacrifices a chicken?... or a baby? Hell no! ‘Course he doesn’t. Don’t be a fuckin’ mong, Kid.”

“A, uh, mong?” I asked, sitting up with a pillow between my back and the headboard.

“A cretin, Kid! Christ,” he barked. “He goes home and he nukes a Hungry Man dinner, takes a dump and watches the Beav, just like the rest of us. None of these creeps is an evil genius or some horned, cloven-hoofed devil.”

He trailed off and left the room full of an unnerving silence. I could see spiny shadows dancing outside the window through the thin white curtains, and the wind had an eerie sound to it—familiar but I couldn’t quite place it. Almost like a rattling breath, or a ragged whisper.

He looked at me, his grin having grown still wider, his face now quite red, and he began to cackle wildly. Riotously, even. I laughed too, although I didn’t really get the joke, if there had even been a joke made. He got louder and his whole head was quivering and getting redder and redder and veins were throbbing in both sides of his thick neck.

Then he started hacking and coughing and spitting up something dark and gritty, like crushed gravel.

“Oh… oh shit, are you… uh…?” I stammered, leaning forward and sort of reaching out instinctively.

I looked down at where he’d spit this coarse, gravel-looking stuff on the bedspread and the carpet, but it was all different—no longer aggregate but these fleshy, pinkish balls and they were kind of sizzling or bubbling, splitting open and on their insides were bundles of moist, matted hair clumped together with rotten looking teeth and infected looking bits of skin, and there was a horrible smell filling my nostrils and mouth and I felt completely nauseated.

I pitched forward, clutching my stomach, and I was having trouble keeping my eyes in focus.

“You scratch my back, and…” I could see his mouth very close to my face—that was all I could see—and there were larger versions of those gooey, fleshy sacs with the bundles of hair and rotten teeth and all stuffed within it and they seemed to be the source of the words I was then hearing, “…I’ll scratch yours!”

Brian Powell gasped awake with his heart pounding in his ears and his shirt soaked through with sweat. Servais was standing over him, a look of alarm on his face. “Christ, Kid, are you alright?” the former Cubs backstop asked.

Servais nodded. “Lotta that goin’ around. It’s the freak—he’s causin’ it,” he looked over toward the now completely blackened canvas on the wall, formerly a Jasper Johns painting, his jaw twitching and tightening. “Or he’s doin’ it.”

Powell sat bolt upright. “Where is he?”

Servais fired up a smoke and offered one to Powell. He jerked his head toward the bathroom. “I threw his ass in the bathtub when you started screamin’ in your sleep. Thought about drownin’ the weird fucker.”

A weird fucker—that was a good way to describe creepy old Mr. Leeds, Emily Twiggs thought. Not anytime soon—she didn’t want to put her employment, already somewhat tenuous after her days-long “sex work sojourn,” she imagined, at risk… not to mention the draconian contracts under which Moustache Publishing’s employees labored—but in a few years, when she wrote her tell-all memoir, she’d roast the “Weird fucker.”

This last bit the young reporter had unwittingly said aloud, drawing a curious glance from Leeds. Fortunately, from Emily’s vantage point, he was on his Very Important Phone Call, and so he returned his focus to that (and, needless to say, his ever-present Sega Game Gear handheld gaming console).

“Yeah, well, look, lady, I think I deserve a—you’re not?” the Moustache Publishing boss or whatever asked, sounding thoroughly befuddled. After “hmm”ing and “ahh”ing for a moment while pressing buttons furiously, he spoke again: “Huh. Well, don’t let me tell you how to live your—yeah. I… right. Low T or somethin’?”

Leeds pounded the buttons with renewed vim and vigor, mouthing a “cuss” upon finally relenting, dropping the Game Gear to his desktop in disgust. “Well, then, I apologize, Jeffrey. I’d—what? ‘Heffrey?’ Is that even a real name? Fine! Look, Heff, anyway, I just don’t see how these codes can, ah, legally be called, you know, ‘player-empowering’ in good conscience when, uh, they don’t even offer a, uh, ring bonus or extra men or anything. Yeah, that’s right: ‘extra men.’ You know? ‘An extra guy?’ ‘More continues?’ Look, put me on with somebody who speaks the goddamn language then! Thank you.”

Cupping his hand over the receiver, Leeds hissed, “Fuckin’ mong,” then gave Emily a reptilian smile and whispered, “Right with you, Legs.” She smiled, fantasizing about smashing the Game Gear over Leeds’ head. “No problem, Mr. Sir,” she said warmly.

“Hello? Hello? Fuckin’ spazzoid changeling hung up on me!” Leeds roared, already bordering on a five-alarm shit-flip due to the shoddy controls of Chicago Syndicate, which he’d explained to both Velma and that dolt “Heffrey” were entirely to blame for reformed cat burglar Larcen Tyler’s inability to effectively wage war against the combined forces of the Windy City’s mob families. “Velma! Get the boy on the line again! The boy from the ‘codes’ hotline!” he bellowed into the intercom.

Breathing heavily, Leeds leaned back in his expensive-looking faux leather desk chair. “What can I do for you, hon’?”

“I had the draft of my story to show you,” Emily said, then added: “The sex work story.”

“Oh,” Leeds responded with all the enthusiasm of a child receiving a pack of white crew socks on Christmas morning.

Emily shook her head. “I… um… she’s… The Man with the Gold Car’s daughter?”

“Oh… oh yeah?” Leeds cocked an eyebrow and tapped his forefinger on his jaw a few times, then drummed upon the edge of his desk several times with his thumbs. “Well then, let’s see what ya got.”

From outside Leeds’ office, Oscar Berkman watched in horror as Emily moved around the boss or whatever’s desk and leaned forward—her long, silky brown hair falling down on his shoulder—to point out something on the document she’d handed him a moment earlier.

“This is a nightmare!” Berkman said in distress.

“Yer tellin’ me, sonny jim,” The Chief, who’d sidled up without the younger man’s noticing somehow, said, biting a cigarette in half before adding, “I had ta dock the new kid half a week’s pay for usin’ a slur in his content.”

Berkman, initially startled and then annoyed by The Chief’s presence, found his curiosity piqued. “Really? What’d he say?”

“‘Slippery slope,’” The Chief said, lowering his head in disappointment. He sighed through his teeth, a little whistle sound escaping from the gap between the front two. “I fought some nasty nips and ornery Orientals in the War, kid, but the mag can’t have that kinda lingo in it-- not these days. ‘s a different time, ya know?”

“Yeah, sure, that’s how it starts. Then the next thing ya know he’s callin’ for a race war. Nip it—er, grab it in the bud,” he furrowed his thick, fuzzy caterpillar-like brows, “Well, that’s what I says. What’s goin’ on with Leeds and the bird, anyways?”

Berkman shook his head in general disbelief. “I wish I knew.”

The Man with the Gold Car stepped out of his glorious, shimmering vehicle, leaving it to idle as it rested atop what was left of the “Rodding the Lightning with Rod Hugedork” set and the studio’s outer walls collapsed all around it.

Bedecked in his resplendent gold driving suit, with his thick head of blond hair parted neatly to one side, a demulcent smile on his handsome, ageless face and having an exceedingly calm demeanor that belied the carnage of the scene in which he stood, he stepped forward, approaching the camera—still running in the otherwise abandoned husk of the studio—and primping his hair in the monitor.

“I want to be a drive-all-day-and-run-all-night-man, a service-with-a-smile-man, a handshake-and-a-kind-word-man, a glass-of-ice-cold-sweet-tea-on-a-hot-day-man, a song-in-my-heart-and-a-spring-in-my-step-man,” he spoke in a sonorous, merry voice not unlike enthusiastically recited verse. Then he leaned close—very close—to the camera. “But I got a bad headache,” he said in a flat voice that chilled one to the bone. “Eeeeeeeeeeeeeeeeeeeeeeeeeeeeeee!”

With the piercing, hellish, wordless scream that served as the coda to the mercurial, mythical figure’s soliloquy, the camera’s lens cracked and exploded along with the eardrums and eyeballs of all those who were still listening to or watching Rod Hugedork’s simulcast.