Fear of crime could squelch a liberal nerd’s campaign. 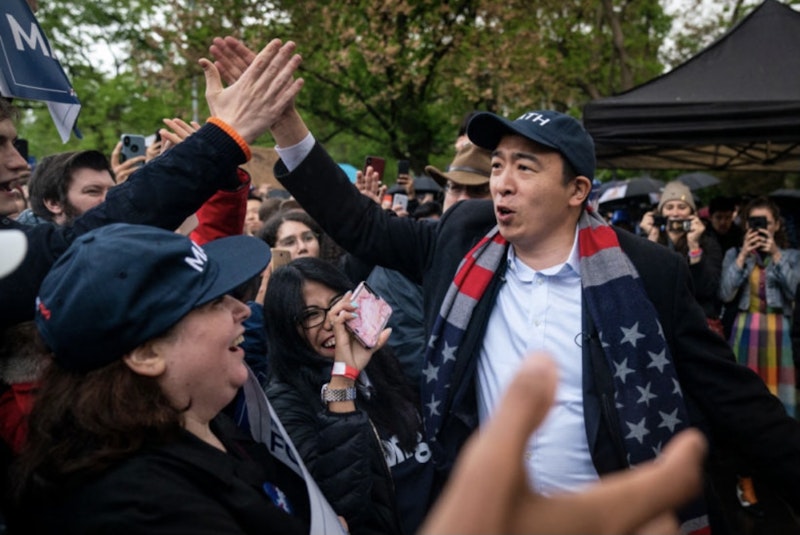 New York City’s most conspicuous oddball, as I type this a week prior to the mayoral primaries here, is Andrew Yang. He’s in some ways my type of nerd: 1990s Brown alum, likes robots, would love to believe the City can be made fun again with some easy policy fixes. The economic advisor from his presidential campaign, Ann Lee, said very nice things about my book on libertarianism.

Even if his idea of neat nerd policy fixes is often a mix of the quirky and the authoritarian—legalizing to-go alcoholic beverages with one hand while he institutes more surveillance programs with the other—he’d probably do far less damage than someone more tied to political machines (the metaphorical ones, I mean, not the robots) and unions. Since New York State tends to rank last in lists of U.S. states’ economic freedom, and since we’re in the final months of having a communist as mayor in New York City, it’s hard to believe Yang would make things much worse.

Thus, I’ve tended to view him with sympathy as he's bungled his way through our era’s p.c. landmines. So sensitive is NYC these days that he was condemned by some gay activists as insensitive for saying at a rally of the so-called Stonewall Democrats, “You’re so human and beautiful… You make New York City special. I have no idea how we ever lose to the Republicans given that you all are frankly in leadership roles all over the Democratic Party… If I go to Cubbyhole, I think I’m going to be accompanied by at least one of my two campaign managers who are both gay… So there’s like a lot of familiarity with the community at the head of my campaign, leading it.”

If that’s what passes for hate speech these days, I can only imagine how fawning the love speech must be. Nonetheless, the group endorsed Scott Stringer for mayor instead. God help Yang if he gets near a trans movement event, I suppose, given that they’re angrier and more demanding than gay groups.

Living embodiment of the electorate that I am, I unwittingly walked in the wee hours this past Saturday from the sort of environment that creates Yang supporters to the sort of environment that’s apparently creating even more numerous Eric Adams supporters. I left a birthday party for a button-wearing and nerdy member of the “Yang Gang,” as Yang supporters call themselves, and by passing through Washington Square Park unwittingly viewed a scene that’s apparently inspiring fear, or at least sensationalist headlines, at the New York Post and causing people to long for a more tough-on-crime candidate than upbeat Yang.

The park appeared to host a gathering of hundreds of happy people, listening to music and loving life with a palpable sense of relief at COVID protocols fading away. But according to the Post, these post-midnight gatherings aren’t a sign the City still has life but are instead “mayhem” that call for curfews and police crackdowns. The Post makes it sound as if you’d see the horror any time you glance around—though one of their recent pieces on the purported carnage included a fight at a diner no New Yorker would normally talk about as part of Washington Square Park, for starters. They want the picture to look grim.

That sort of uptight “law and order” pro-police thinking is what often passes for “conservatism” in New York City, which doesn’t have much in the way of the other kinds of conservatism (religion, free markets, tradition, etc.), but in this case, with voters understandably shaken by rioting and looting last year, it’s a mindset that may lead to the election of a fairly conventional but anti-crime Democrat, Eric Adams. I admit he deserves some eclecticism points for being liberal, enthusiastically vegan, black and at the same time pro-gun, anti-crime, an ex-cop, and anti-woke-sensitivity.

Most New Yorkers think guns are inherently evil—even some of the aforementioned “conservatives”—but Adams says he’ll carry his gun as mayor and says a safe city shouldn’t need security details for politicians anyway. He laments the “far left,” too, and the detached “truth be damned...Instagram/Twitter universe” in which combative discourse now occurs. You can’t just label him a conservative in disguise, though, not if he attributes the recovery of his faltering eyesight to his kale-filled vegan diet and plans food/health education centers throughout the city. He may have succeeded in squaring the City’s cultural circles.

And by libertarian standards, it’s good his economic platform at least includes some tax breaks and fine reductions, whereas the average NYC left-liberal wants both the tax and the regulatory burden increased, just to stick it to those no-good capitalists. No candidate who neglects to mention reducing government as the most obvious method of boosting the economy here should ever get anyone’s vote (not that it’s clear anyone should be voting or that there should be a government at all, mind you).

Reacting to the Adams surge, Yang's campaign has gone surprisingly negative in the final weeks, saying, “Eric Adams has achieved the rare trifecta of being investigated for corruption at the city, state, and federal levels—for rewarding shady donors, operating a sham organization, and illegally using non-profit dollars to boost his political career.” And Adams may not even really live in New York City, spending too much of his time in dreaded New Jersey.

But New York welcomes stranger people from stranger places and may not much care. After an exhausting couple of years, they may be happy to have an out-of-town cop save them from potential chaos in the streets, real or imagined, and if the cop is black to boot, they can skip all the wearying arguments about whether they’re voting out of white supremacism and anti-Asian hate. The robots dispensing universal basic income credits may have to wait for a rosier, more optimistic future.