No prayers or good thoughts, thankfully, were solicited. 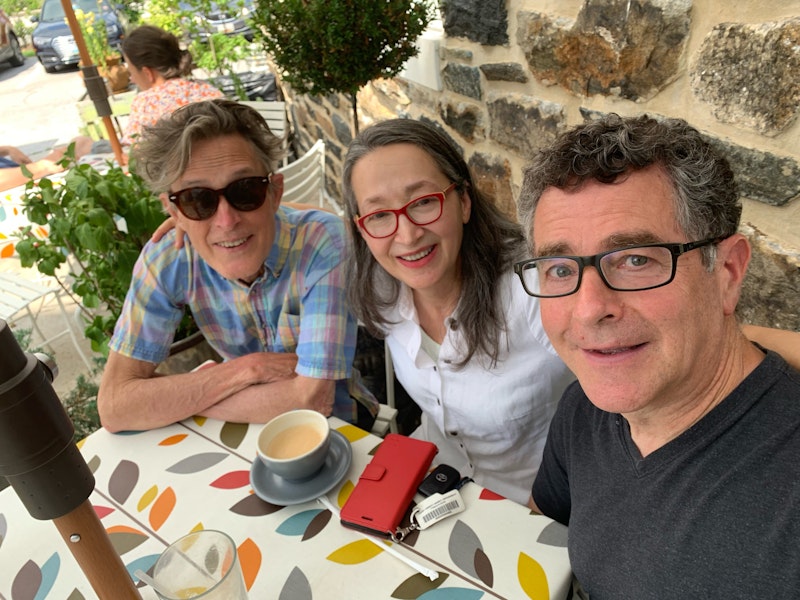 This was refreshing: last week, I met three longtime friends at Baltimore’s Artifact Coffee (located in the Clipper Mill/Woodberry neighborhood at the bottom of Hampden, and, if you’ve little sense of direction, like me, exceedingly difficult to locate) and I was waiting on line inside for an iced coffee when Michael Yockel walked in. We shook hands—a relief, since maybe that long and civilized tradition hasn’t forever given way to the ostentatious “I follow the science” elbow bump—and I looked at him with a mock tsk-tsk tattletale expression, saying “Where’s your mask?”

The Yoke was momentarily flustered, as opposed to his normal unflappable demeanor, and said, “Gee, I completely forgot. The rules are changing every week.” As it happened, his lapse, which, even three months ago, would’ve resulted in an employee’s upbraiding, wasn’t even noticed. Same thing happened to me a few days ago at Starbucks, a model of vigilant mask culture, when I picked up order without my 1919-government-issued face covering, and apologized to the server, but she said, rather merrily, “Don’t worry about it, Smith, happens to me all the time.”

That’s a convoluted beginning—although not a patch on the route I took to get to the damn coffee shop—but We Are the Champions, my friends, and that’s that. The four of us—Alan Hirsch and Jennifer Bishop were at the outside table with the Yoke (the three are pictured above) and me—took turns on family catch-ups, which often digressed into completely other threads of information/gossip, and it was all very, very jolly, not least because not one of us slipped into social media jargon, using phrases like “quite literally,” “Is that a thing” and I’m deeply concerned,” confirming—and I admit this has long been a personal, and documented, source of disgust—that the clubby media Big Feet on Twitter that I follow (and lesser lights, too) have the imaginations of a cicada, with apologies to the symphonic insects that are now leaving us for another 17 years, which will arrive as quickly as I can wiggle my ears, and I hope at 82, my wits will still stand, if, it goes without saying, I’m standing at all, my dust-to-dust dust ashes not yet in the muck of the Hudson River.

It was also a “spread the good news” moment when Alan batted down the rumor that he’s starting a Substack account.

Quick background: I met Alan in September 1973, during freshman orientation at Johns Hopkins; Jennifer two years later, when she started taking photos for the school’s News-Letter (and is acknowledged as one of Baltimore’s finest photographers, a distinction she’s held for decades); and The Yoke in 1979 when he first contributed an article to Baltimore’s City Paper—a dashing racetrack/pop music/baseball guy who also drove an Alfa Romeo—and continued with the paper for many years, before branching out to the New Times chain of ground-breaking weekly newspapers. (Alan and I won’t forget the time in 1982, when CP was struggling financially (understating that period), and we told the Yoke and fellow editor Phyllis Orrick that one of them would be laid off. They huddled for about two minutes, and the Yoke said, “We’ll take pay cuts if we can both stay.” You meet and work with all kinds of people in a journalism/publishing career, many entirely despicable, creepy, malicious and litigious, but that anecdote reflects the character of our friends Michael and Phyllis.)

Anyway, our time was limited, and I forgot to ask Alan and Jennifer if they’d seen the 125th anniversary issue of The News-Letter, which was released last month. It was an excellent package, including articles and interviews with the likes of Michael Hill and Mark Reutter, two talented men who piloted the N-L during the Vietnam War years, along with the late Richard Ben Cramer (author of the last great presidential campaign book, What It Takes: The Way to the White House) who preceded first Alan, and then me, as editors of the paper. One my confederates at the paper, David Warren (who went by D.H. or “Dotto”) wrote a typically jaunty article for the issue, and he asked why I didn’t join in. I have no idea: Twenty-five years ago, I would’ve assumed it was a snub, but it’s more likely I missed the invitation since I immediately delete all emails from Hopkins, which arrive several times a week, hitting me up for money. As if the school needs my $100 when Michael Bloomberg donates in the billions. Although it’s possible—no attempt at an eight-slice toast intended—I’m considered a pariah.

There was an interview with Eric Garland, a mutual friend, who succeeded me as News-Letter editor, was at City Paper (and helmed the paper’s softball team) and now, after a long, varied and fascinating journalism career, is a partner at Blue Heron Research Partners in New York, “a due diligence firm for hedge funds and private equity firms.” His reminiscences of the old days at the N-L were graceful, although perhaps he didn’t exercise his memory quite enough. He says of his introduction to the twice-weekly paper: “There were a bunch of slightly oddball eccentrics hanging out, banging away on typewriters, smoking cigarettes, drinking open bottles of liquor… As you know, there’s that little alcove at the very top. You have to get up by a ladder. I think we had a mattress up there, and you would go up there and sleep… That was a kind of hangout.”

“Open bottles of liquor”? Did Eric go Mormon on us? I recall sharing many an “open” bottle with him 45 years ago. Definitely a hangout, but also the office I chose to work in day and night, and there was a mattress, which I brought to the N-L after sophomore year, as I lived there for the summer, against University policy. Every day at midnight, a security guard, on his rounds, entered the building, and if I’d returned from whatever revelry around town, I had to lie still and not make a sound, for fear of losing my rent-free (there was a shower in the basement, just cold water) abode. Years ago, in 2004, I took my two sons to the News-Letter, and the current editors were obliging enough to allow us up the ladder. (At a small, no-pay, no school-credit paper like the News-Letter, an unspoken bond does exist for many who worked there. One day in ’75, Bruce Drake, a former editor and then with the Daily News, walked in, introduced himself quickly and asked if he could use a typewriter, on deadline for a Washington-based story. He was busy, but I was thrilled to chat for just five minutes with a guy I’d only heard about.)  Incredibly, a lot of my wall clippings (“Nancy” and “Herman” cartoons, David Porter and Joachim Blunck photos, Village Voice and Fusion covers, etc.) were still there, as well as stray copies of 1975-76 News-Letters tucked in a cubbyhole.

Finally, there was no hand-wringing of the kind you find in The New York Times about how to dress or interact after the past 15 months among our group at Artifact. Simply a pleasurable part of a temperate Baltimore morning.