The Entertainer in Astoria

Pianos, hit songs, and bidding wars in one of New York's most distinguished neighborhoods. 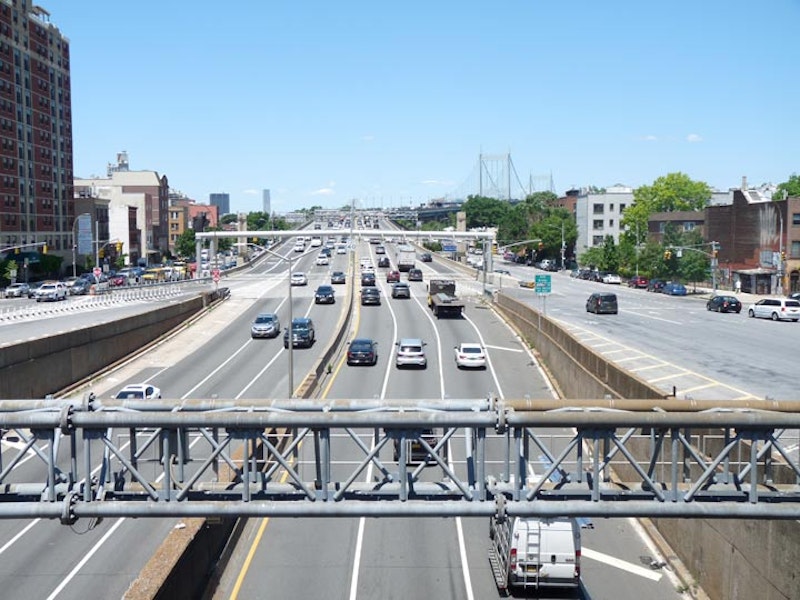 After fur merchant Stephen Ailing Halsey had incorporated the village in 1839 on the northwest end of Queens south of the present Astoria Park, Astoria was named for a man who apparently never set foot in it. A bitter battle for naming the village was finally named by supporters and friends of John Jacob Astor (1763-1848). Astor, entrepreneur and real estate tycoon, had become the wealthiest man in America by 1840 with a net worth of over $40 million. (As it turns out, Astor did live in "Astoria"—his summer home, built on what is now E. 87th St. near York Ave.—from which he could see the new Long Island Village named for him.)

The view seen here is from the Astoria Blvd. station of the elevated train, which runs above 31st St. Built in 1917, it has an unusual configuration, with extended pedestrian walkways that were needed after the Grand Central Parkway and Triboro Bridge were built in 1936. 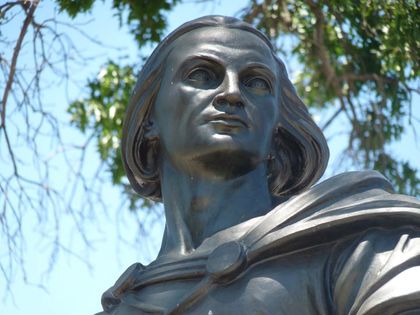 Columbus Square (modern signage calls it Columbus Triangle) is where Astoria Blvd., coming in from the west, becomes the Grand Central Parkway service road at 31st St. Sculpted by artist Angelo Racioppi, the statue depicting Christopher Columbus, was dedicated on October 12, 1941. The statue has a convoluted history. It was ready for installation before World War II, but wasn’t dedicated because no money could be raised for the base, and no doubt there was some anti-Italian sentiment when Mussolini allied with Hitler. The statue spent the war years in a city warehouse, and then to the basement of Queens Borough Hall in Kew Gardens. It was finally installed after the war. I don’t know if it was subject to any abuse when statues were toppling in the summer of 2020, but it doesn’t seem the worse for wear. 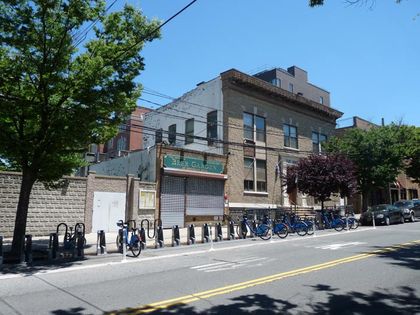 For many Astoria denizens, lazy summer evenings mean quaffing pitcher after pitcher of pilsner, seated on wooden picnic tables in the concrete beer garden of Bohemian Hall to an oompah soundtrack. The 24th Ave. institution was opened by the Bohemian Citizens’ Benevolent Society in 1910 and its garden by 1919, when most of Astoria was still meadow and farmland. The menu has to be carefully scrutinized, as the large print is in Czech and the small print in English. The beer garden is the last of a once-numerous New York City breed, though new “wannabes” have arrived in recent years. The Bohemian, thankfully, has weathered the pandemic and looks like it will be here for some time. 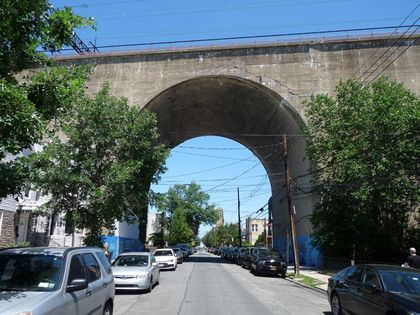 The Hell Gate Bridge was the final piece in the puzzle of running railroad trains into Midtown Manhattan. The tubes connecting Long Island with Penn Station opened in 1910, and Hell Gate Bridge, connecting Long Island with the mainland, opened in 1917 as the lengthiest steel arch bridge in the world until surpassed by the Bayonne Bridge in 1931. “Hellgat” means ‘beautiful strait” in Dutch, but lived up to its English transliteration as an extraordinarily dangerous stretch of water due to conflicting currents of the East River and Long Island Sound, as well as rocks that made it treacherous for shipping until the rocks were dynamited into rubble in the late-19th century. The construction was overseen by Gustav Lindenthal, who also worked on the Williamsburg and Queensboro bridges. In the mid-1990s it was painted maroon, which the sun has faded to light magenta.

A feature of the Hell Gate little remarked upon are the massive arches that take the railroad over 29th, 31st, 33rd, 36th, 37th and 38th Sts. The railroad tracks are supported on a massive, iron and stone-supported embankment in much of its route in Astoria, and a combination of iron trestles and concrete arches span the streets beneath. 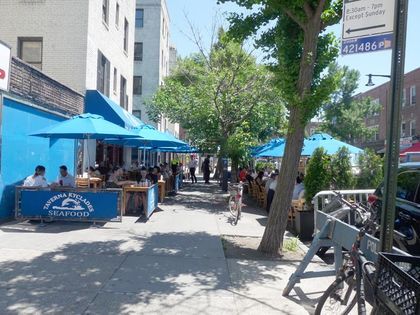 I was heartened to see that restaurants and curbside eateries were jam-packed on a Thursday afternoon at one, but that may mean there are still a lot of people out of work in NYC, which has an unemployment rate of 10 percent. Perhaps they’re working from home. At least the restaurant workers have something to do. 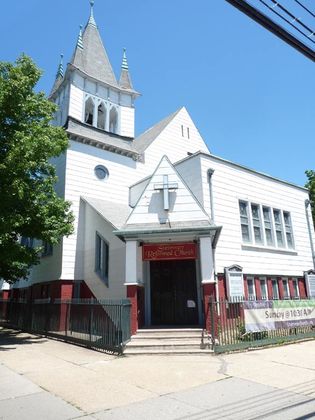 The Steinway family, master piano builders, transit magnates, and resort developers, put a personal stamp on the neighborhoods in which they resided that is visible even today. Henry Steinweg, a German piano manufacturer, immigrated to New York City from Seesen, Germany, in 1853. His sons Henry Jr. and Theodore set about making the finest pianos ever. Henry Jr.'s and Theodore's younger brother, William, continued the family tradition (advertising their instruments as "the standard piano of the world") and moved the operations of Steinway Pianos to Astoria, Queens.

Between 1870 and 1873, William Steinway purchased 400 acres of land in northern Astoria and not only built the spacious Steinway piano factory, which still cuts an imposing figure, but a small town with a library, a church, a kindergarten, housing for factory workers, and a public trolley line. From 1877-1879, Steinway constructed a group of handsome row houses on Winthrop Ave. (today's 20th Ave.) and on Albert and Theodore (41st and 42nd) Sts. Even the street names bore witness to the Steinway family, since Albert and Theodore were sons of Henry Steinway. These homes were rented by the Steinways to their workers. William Steinway's mansion, on 41st St., still stands on a high hill that has never been leveled, unlike the surrounding area.

Steinway Reformed Church, Ditmars Blvd. and 41st St., was built in 1891 as the Union Protestant Church but likely switched monikers after piano man Henry Steinway donated a pipe organ. It’s likely Steinway also built the church as a place of worship for the workers in his. The Steinway name is still appended to the church, which offers services in English, Korean and Greek. 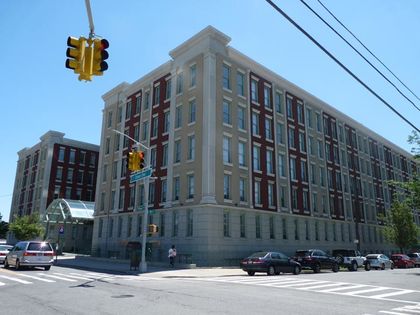 At 45th St. and Ditmars Blvd., we find Pistilli Manor, which was once a forbidding-looking building indeed when I first moved to Queens, when it was a warehouse and adjunct factory associated with Steinway Pianos, whose main plant remains in Astoria few blocks to the northwest. Joseph Pistilli also converted an Eagle Electric factory next to Astoria Park to apartments, with predictable leaking results. 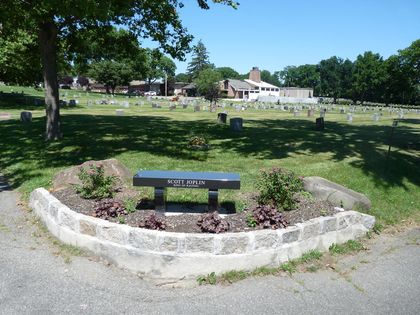 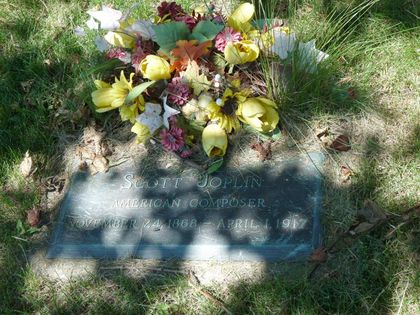 In north Astoria, the Brooklyn Queens Expressway cleaves in two, with the western section going to the Triboro Bridge via the GCP, and the eastern section to LaGuardia Airport and beyond. Trucks and buses have to leave the BQE before the intersection, with large vehicles wishing to take the Triboro accessing it from the service road, Astoria Blvd.

St. Michael’s Cemetery (88 acres) is accessible from 49th St., here, and also from Astoria Blvd. south on the south GCP service road. St. Michael’s, named for an Episcopal congregation in Manhattan, is one of Queens’ larger cemeteries (though much smaller than Cypress Hills, Calvary or Evergreens) and lies north of Queens’ larger cemetery belts defined by Calvary/Mt.Olivet/Mt.Zion and Evergreens/Holy Trinity/Cypress Hills. It was established in 1852 and is the “permanent residence” of boxer Emile Griffith, inventor Granville Woods, and mobsters Frank Costello and Joey Gallo.

Scott Joplin was born in 1867 or 1868 (the date is disputed) and grew up in a family of musicians in Texarkana, Arkansas, and picked up the ragtime style while working as a railroad worker and itinerant piano teacher across the southern states. In 1895 his “Maple Leaf Rag” became a best seller when music was published on paper for people to play on their household pianos, or on rolls for player pianos. He was never really able to follow it up, but sales did keep him afloat for the rest of his days. He died of syphilis in 1917 at Manhattan State Hospital and was buried here in St. Michael’s. His music earned a second life in the 1970s when it was used in The Sting and his opera Treemonisha, unknown during his lifetime, was finally staged. His grave marker in St. Michael’s was placed by ASCAP in 1974, the same year Marvin Hamlisch had a hit with Joplin’s 1902 rag “The Entertainer.” The honorary bench was added years later.