These Pictures of You

Nothing wrong with being “common.” 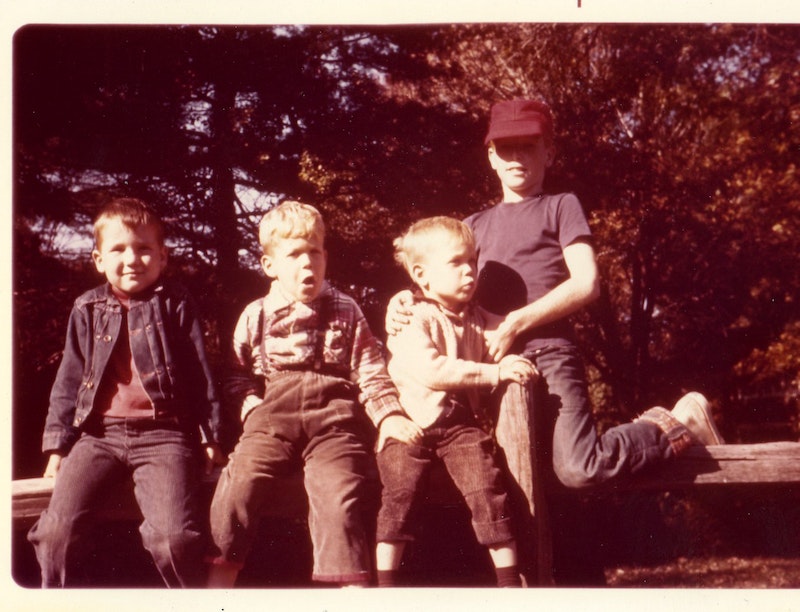 Near the end of Anne Tyler’s masterful 1988 novel Breathing Lessons, protagonist Maggie Moran (married to Ira and living a middle-class life in Baltimore), looking at all the family pictures in their house recalls her fancier, and snobby, mother’s admonition that it’s “trashy” to display photos anywhere besides the bedroom. That’s one way to look at it: just like some are particular about their Christmas tree, displaying only white lights, while others prefer a messy bunch of colors that highlight the ornaments. Maggie’s mother despairs that her daughter’s life defines “common,” as highlighted by the documentation of different stages of the Moran’s children crammed on walls in their “ordinary” house. (I was reminded of this during the fan-affirming Red Sox-Yankees Wild Card game on October 5, when an announcer said that Yankee Bucky Dent—the unlikely role player who hit a deciding homer in the 1978 playoff game between the two teams—has pictures of that moment all over his Florida home, including one above his bed. I’ll keep my own counsel on that flourish, but will say it goes beyond “trashy” into, to be polite, “weird” territory.)

I’m with Maggie on the photos, as are most people I know, regardless of their economic status. When I was growing up, there were a number of pictures hung in our split-level house, most prominent, at least to my parents, five pictures of my brothers and me as babies, placed in order of birth down the stairs to the playroom. Since I was a teenager, I’ve tacked up photos or news clippings on the walls, mostly because they reminded me of something, looked cool, and might cause a momentary reverie by the odd glance at one. My newspaper offices—from the Hopkins News-Letter to New York Press—were cluttered with such frozen moments, and visitors often took a few minutes to scan the “museum” of torn-out articles, photos, original illustrations by artists I knew, paintings, and “Herman” and “Nancy” comics.

(At City Paper in Baltimore, my space was also festooned with photos and such, including one of me hoisting a trophy for winning a city government-sponsored miniature golf tournament. In 1987, after the paper was sold and I was preparing to leave on a months-long trip around the world, my business partner Alan Hirsch organized a going-away party at a Little Italy restaurant. He cracked himself up by presenting me with a toaster—alluding to the pictures in my office—and said he’d tried to get an eight-slicer, but couldn’t find one. It was a good-hearted joke at my expense, and I joined in the laughter. Alan, at least at our Charles Village offices, was like Maggie Moran’s mother: no pictures. What can I say, Al—and I’m about the only one allowed to call him that—is a hell of a fancy guy.)

At our North Baltimore home today, we’re very “common” and you can walk into almost any room and see framed photos—usually of our kids at different ages, but also extended family members—or paintings by my wife or our longtime friend Michael Gentile. Melissa has the “eye” for décor—I don’t, and am glad to leave that to her—and she’s done a splendid job, although she doesn’t touch my third-floor office which is so much the work of a packrat that, as I get older, it’s hard to move around. More than once I’ve tried to rearrange an off-kilter photo and took a tumble, falling flat on my ass, or worse, an arm. My son Booker says, not in jest, that because of my poor eyesight and clumsiness, I should wear a football helmet.

Anyway, right now I’m looking at a print (shown above), converted by my dad years ago from a slide, taken in 1962. From left to right are yours truly, cousins Steve and Phil Duncan, and my fourth oldest brother Gary, ruling the roost. It’s an autumn day, given the trees and our clothes, but I’ve no idea where we are. Could be Mill Dam Park, where I later played Little League for five years, where our annual Turkey Day Classic football game took place, the site of clandestine evening minor drug pick-ups, and the parking lot that was a favorite of my brother Jeff, in his ratty red Dodge, who would take some of the younger brothers for coffee and fresh, buttered rolls from the nearby deli.

The wooden (and probably rotting) fence gives a clue that it might be in the vicinity of the Smith household, maybe by the open-border entrance to “The Greens,” a playland behind the 14 identical houses on our cul-de-sac, where I spent so much time as a boy, swinging from vines, carrying out 1960s-style “war games” with pistols loaded with clay pellets, carving initials on the “Bunny Tree,” exploring what was said by one parent on the block to be a World War II bunker for storing food and other supplies in case the “Krauts” invaded Long Island (I bought this at 10; at 15, I suspected the story, although very rich, was apocryphal). A longshot here, but maybe it was taken in Douglaston, Queens, where the Duncan family lived, helmed by Uncle Pete and Aunt Peggy, near their well-worn (that’s on account of four kids) but big house.

It doesn’t really matter. The four of us now range in age from 62-70, worse for wear from age but intact. Phil, until recently a lifelong New Yorker, is spending his retirement in Texas, with wife Virginia, riding horses, among other activities.

Years ago I wrote a story lamenting the vanishing photo album, once a staple but now replaced by pictures stored on phones (as if they don’t get lost or screwed up, instead of the permanence of the album) and regret that I almost never print digital photos, except for birthdays and Christmas. I had a shitty camera as a teen, a one-clicker, but enjoyed the ritual of dropping off a roll at the local photo store (this was pre-one hour service) and anticipating picking up the developed pictures two days later. Some, from 1970 in particular, are still pretty good. And I guess I just toasted myself!