There’s no room for lampposts on narrow sidewalks. 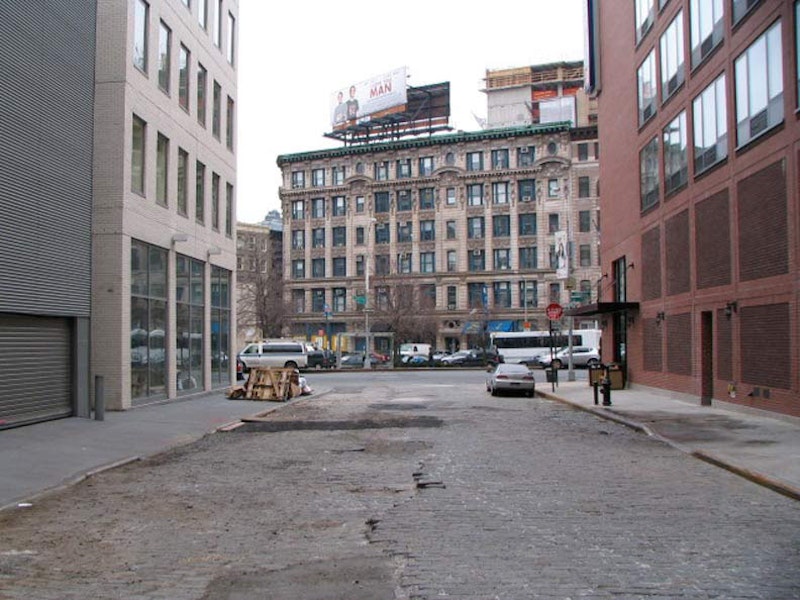 “Heaven,” sang David Byrne, “is a place where nothing ever happens.” “Being just contaminates the void,” Robyn Hitchcock riposted some years later. In that spirit, it’s possible that the three alleyways shown here are still here in New York, a town that has gradually sloughed off, paved over and eliminated its alleys, precisely because they are so little-known, inoffensive and little-trafficked that the developers have spared them.

Soon after the British captured New Netherland from the Dutch in 1664, Colonel Richard Nicolls, who’d led the armada into New York Harbor, took possession of the territory and promptly renamed it for James, then Duke of York, the second son of King Charles I. Nicolls followed the “New” precedent set by the Dutch and so, New York was born as an entity.

“York,” itself, as a term, has a convoluted etymology. It was originally the term for yew tree, eburos, in one of the Celtic languages from western Europe that were displaced by the Italic and Germanic languages spoken by migrating and invading peoples from the east. A town named for the yew, Eburacon, was Latinized by the Romans to Eburacum. In following centuries the name was simplified to Evoroc, and when Anglian conquerors arrived in the 300s and 400s, they heard Evoroc as sounding like their word for wild boar, eofor; adding the suffix, wic, village, the name became Eoforwic. Britain was again invaded some centuries later, this time by the Danes, or Vikings in popular fable, and the Danes, as the Angles had before them, adapted the place name to their own purposes and tendencies, and Eoforwic began to sound more like Yorvik. By Chaucer’s time in the 1300s, this had finally become York.

Tiny York St., tinier, in fact, than it originally was, is the only street in Manhattan named for its original British namesake. York Ave. on the east side was named for World War I hero Alvin C. York. Until 1823, York St. was the eastern extension of Hubert St., and until 1928 it extended through to W. Broadway. The southern extension of 6th Ave. for the new IND subway that year cost York St. about 40 feet now occupied by the 6th Ave. roadbed. It may look shorter, but York St., between 6th Ave. and St. John’s La. north of Beach St., is fully 103 feet long. 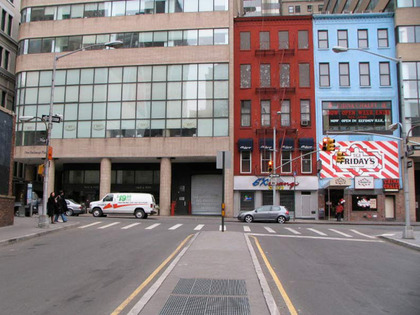 Throughout the years, several streets have competed for Shortest Street in New York City. There are many streets in New York, such as Mosco in Chinatown, that’ve been carved up, paved over, renamed, and shortened; some, such as Chestnut, shortened repeatedly and as a final ignominy, eliminated completely (by the Al Smith Houses, the terminator of Chestnut, Oak, Batavia, New Chambers, and most of James and Oliver); and then there’s Edgar, which has been paved over and revived.

Edgar St., which is presently 63 feet in length, was named for shipping merchant William Edgar, who at one point in his career owned the biggest shipping operation in the city. While Edgar remains, officially, the shortest through street in Manhattan at 63 feet in length, it’s rather busy, with two-way traffic and a center median. The red and blue buildings center right are likely the only structures that predate the construction of the Brooklyn-Battery Tunnel, out of the picture on the right (no one calls it the Hugh Carey) in 1951. Edgar St. was transformed from a tiny alley to a traffic conduit between Greenwich and Trinity; the old Edgar was paved over, while the new Edgar was constructed. 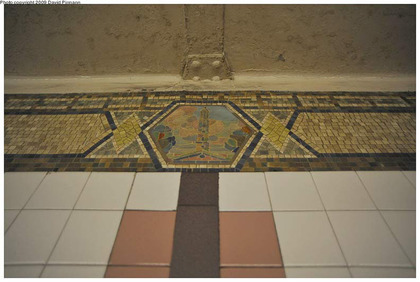 The ceramic plaque at the Canal St. station on the #1 train, the 7th Ave. line, depicts a church with a towering spire, flanked by ample vegetation. Neither the church that’s shown, nor the vegetation, is in evidence today. The church is the old St. John’s Chapel, which once stood on the east side of Varick St. between Beach and Laight Sts.; the back side of the church faced the alley that was named for it.

By all accounts, St. John’s Chapel was impressive. The church was completed in 1803 by architect John McComb, and built by his brother, Isaac; McComb would go on to co-create NYC’s City Hall. St. John’s was design was based on that of St. Martin-in-the-Fields in London’s Trafalgar Square, with a portico supported by four Corinthian columns, and a 214-foot high spire. The interior featured freestanding fluted columns, and several years after construction, an ornamental ceiling, and an organ reclaimed from the British, who’d captured it during the War of 1812.

St. John’s was constructed at a time when this location was far uptown and Trinity Church was attempting to gain a foothold in the then-wild territory. Trinity was sure to assert its overall dominance by naming St. John’s a “chapel,” not a church. However, the church’s fortunes began to change during the 1860s; even then, this part of what would be called Tribeca by real estate marketers had begun to become dominated by the commercial and manufacturing concerns that would hold sway here until the mid-1990s. Trinity put St. John’s up for sale in 1866 and it was purchased by the very model of a mid-19th century businessman—Commodore Cornelius Vanderbilt—who razed the verdant grounds and constructed a large freight railroad depot across the street from the church, as shown on the map. The church soldiered on, in a deteriorated fashion, until Varick St. was widened as part of the IRT construction beginning in 1913 (that also gave rise to 7th Ave. South). Today, warehouses and manufacturing concerns occupy the chapel’s old site, and approach ramps to the Holland Tunnel occupy the space of the old depot. The chapel is remembered by the subway mosaic and the once-country lane that ran along its back door.

In As You Pass By, Kenneth Dunshee writes of the area immediately surrounding St. John’s Chapel in the 1830-1860 era: The park and churchyard became noted for the variety and beauty of their trees. The beauty of the homes and abundance of graceful shade made it a place of imposing grandeur. And the continuous line of balustrades framing the square and the houses and running up the stairs to the doorways added a peculiar aspect of European style and magnificence. Many of the homes had window panes that, in the course of time, acquired a violet tint, similar to those in old houses on Beacon Hill in Boston.

An unsuccessful battle to save St. John’s Chapel is described in Max Page’s The Creative Destruction of Manhattan, 1900-1940 and the church is described in Oliver Allen’s Tales of Old Tribeca.

Like every other street in Manhattan, no matter how narrow, St. John’s La. has a sidewalk on both sides, and it’s so out of the way that it’s still paved with Belgian blocks. The lane’s illuminated by finned masts attached to the sides of its facing buildings, as there’s no room for lampposts on the narrow sidewalks.