There Are Intersections I Remember 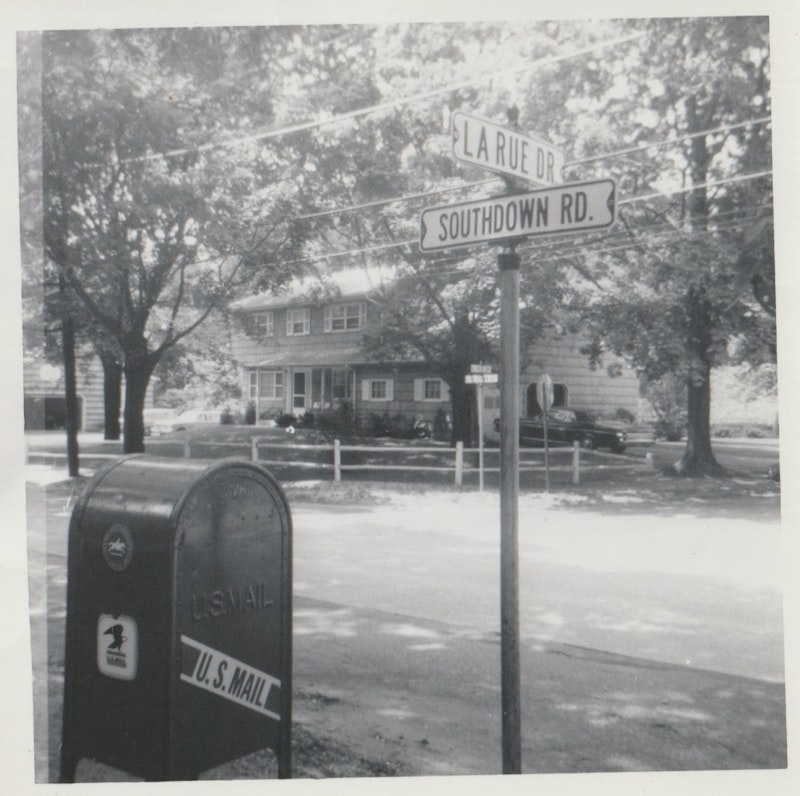 Right now, what sticks out in this nearly-ancient photo of an intersection in Huntington, New York, where I was born and lived until 17, is the mailbox that was new at the time. I loved—and still do—mailboxes. I’m ornery about the decrepit state of the United States Postal Service (USPS), not news to those who read my dispatches, but it’s not a hobbyhorse, not quaint nostalgia filler, it’s an ongoing complaint, and it pisses me off every single day. Surprisingly, the barely-alive state of the USPS doesn’t bother many acquaintances, aside from the occasional “Boy, you’re right!” and I’m under no illusion that any relief is on the horizon. Once again, for the 27th time, if USPS was privatized in the 1980s, maybe mail would arrive in a timely fashion, but no one would buy the struggling institution today.

Briefly: the mail carriers who stop by our house in Baltimore City—and they’re friendly gals, quick with a joke about the joke that is the USPS—don’t do so until eight or nine in the evening. That late hour was inconceivable 10 years ago. Last week, we had no delivery at all for two consecutive days—I still get a decent amount of bills, correspondence, publications and unsolicited advertisements—which was fishy because on the third day, a pile was slipped through the front-door slot, with several parcels outside. Laugh all you want, but upon receiving threatening letters from vendors I use—banks, Comcast, Verizon, medical services, etc.—I cry foul since when looking at my checkbook and seeing that bills were sent out three weeks prior that’s not what I call cricket.

Perhaps I have bias: as a small boy, six or seven, when asked what I wanted to be when I grew up the answer was “mailman.”

Back to business. The snapshot above isn’t really compelling—boring, not skillfully photographed—but it represents something (but not the Cowsills or Lemon Pipers or Grand Funk) to me. This was the bus stop for Southdown Elementary School, Simpson Jr. High and Huntington High School, where 15 or so kids gathered each morning, flapping about the previous evening’s TV shows like Top Cat, The Jetsons, Get Smart, The Mod Squad and so many others. Growing older we traded gossip, made bets on the World Series or football games, and then who was sweet on who. Lots of boasting: one time, in ninth grade, I heard a guy mock-whisper to a buddy, “Alice gave me a hand job last night and I lasted two minutes. You should get some, son!” This fellow was a “hood,” a shitty student and shitty person, and his braggadocio was met with laughter. The kind, as an adolescent for which there’s no recovery. His face turned red and I don’t remember seeing him at the intersection after that.

I lived on LaRue Dr.—123 LaRue, phone number HA1-1441, a split-level house that sold for $19,000 in 1972, but now, as I looked up the address, is worth (depending upon whom you believe) more than half a million, and undoubtedly property-taxed to the max—and it was a steep walk up the hill, which meant nothing to the young, but I did feel bad for homeowners who had to make that trek when their cars conked out because of snow. Southdown Rd. could be treacherous, as cars recklessly whizzed by—even in a residential part of town—and when you rode a bike into town (pre-helmet days) it was imperative to stick close to the sidewalk. On occasion, a few unfortunates were rendered roadkill. The street was the gateway to Wall St., where a bunch of shops, like Jim’s Stationery Store, Southdown Pizza (pro-forma great, by the slice or whole pie, no toppings necessary, and definitely not pineapple or sprouts), run-down general stores to buy baseball cards and Hostess cherry pies and later, a Carvel franchise and fancy German deli. Down the road was the Century Shore movie theater, the firehouse that held a can’t-miss fair annually, and then Main St., where I’d go to the library, Fischer’s for dime chicken wings, and Marsh’s for school shirts and slacks. Huntington’s a Suffolk County hub now, but back then it was a modest, yet welcoming place to live.

Study—and not looking at the other guy’s paper!—the clues to figure out what year it is.