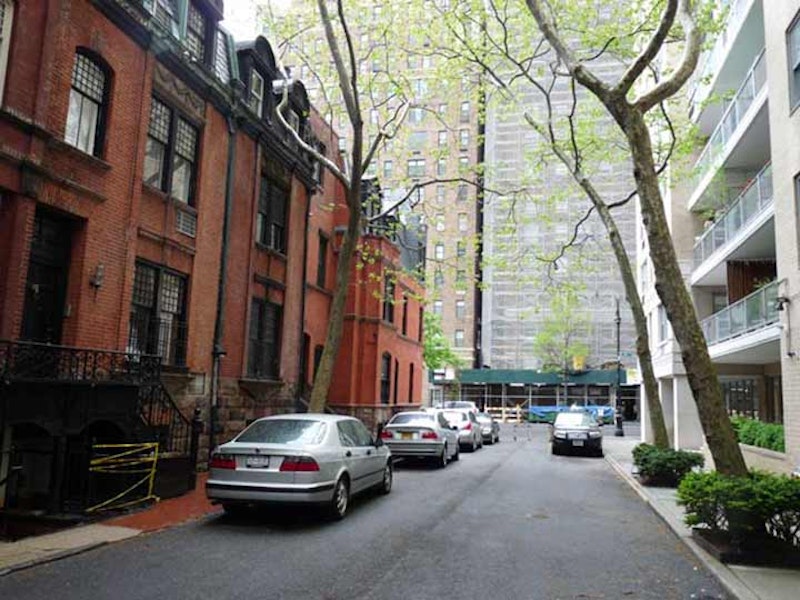 A short time ago I found myself shambling north on York Ave. in the dishrag New York heat and humidity and was wondering if I’d escape the impending downpour. My modus operandi has me take a train somewhere, get off and begin taking pictures of what’s interesting. I carry a camera everywhere, even on job interviews. On one I took photos of the remains of Manhattan’s Music Row on W. 48th after leaving an agency on 6th Ave., and on another, in a suit on a hot humid day in Soho, I went the length of Prince St., snapping away. 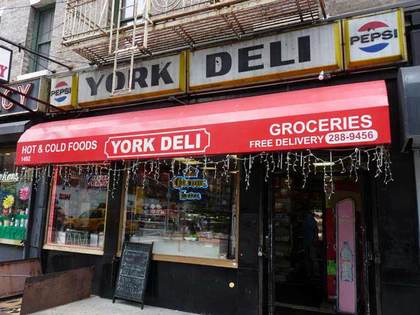 At York Ave., named for World War I hero Sergeant Alvin York, and E. 79th St. is this sublimely simple delicatessen awning sign. There’s the requisite cheap vinyl sign under it, but above it are illuminated panels featuring the Pepsi-Cola bullet logo, circa 1967. The round shape is representative of a bottlecap, which appeared graphically until the early-1970s. 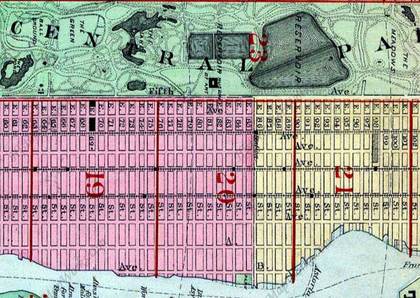 Manhattan Island bulges further east here than it does at any other point north of 23rd St., and an additional north-south street was laid out that runs between E. 79th and E. 90th St. Knowing that York Ave. was once called Ave. A, I wondered if East End Ave., a block to the east, was ever called Ave. B? It was; this atlas plate from 1885 shows it. The street was laid out in 1876 and after a campaign by local property owners, changed to East End Ave. in 1890, likely following the influence of West End Ave., which had been changed from 11th Ave. in 1880. In the 1970s, North and South End Aves. were laid out in Battery Park City.

The “End” avenues are about as close as Manhattan street names ever got to a theme, though many streets in Tribeca are named for figures associated with Trinity Church. Because most of its streets are generically numbered, Manhattan lost out on, say, Washington, DC’s theme of avenues named for states. (The Bronx features dozens of streets for NYC mayors; Staten Island, astronauts.) 1890 also saw 9th Ave. become Columbus and 10th Ave. become Amsterdam. 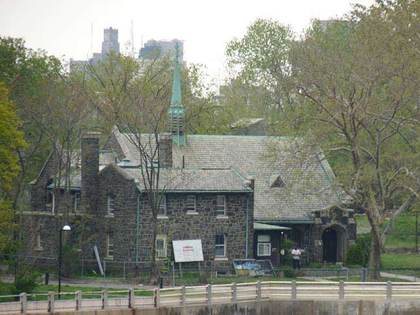 Built in 1924 from island-quarried gneiss as a chapel for Metropolitan Hospital, with an attached rectory for the hospital’s chaplain, it stood abandoned between 1955 and 1975 after Metropolitan moved to Manhattan Island. It has subsequently been the Redeemed Christian Church of God and Dayspring Church. It’s located on the west side of mid-island facing Manhattan. 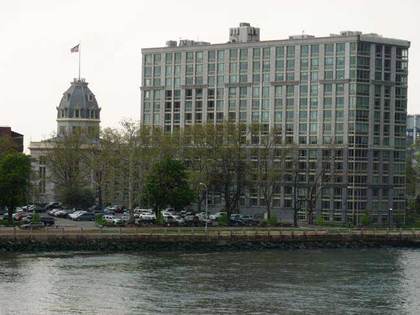 This is about a 17-year-old restoration/reconstruction of The Octagon, built as an island retreat in 1841 by architect Alexander Jackson Davis, featuring a decorative rotunda on an eight-sided base. Inside was a grand spiral staircase and a glass brick floor. The mansion became Metropolitan Hospital in 1894, but the hospital moved out in 1955, and the building decayed and mostly burned down since that time. By the time I encountered it in 1999 only the octagonal base remained. Beginning in 2006 the firm of Becker & Becker Associates reconstructed it using much of the original Davis layout, and it’s now luxury housing. 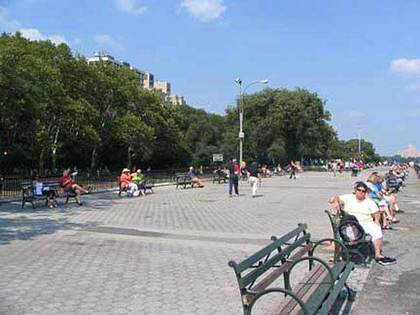 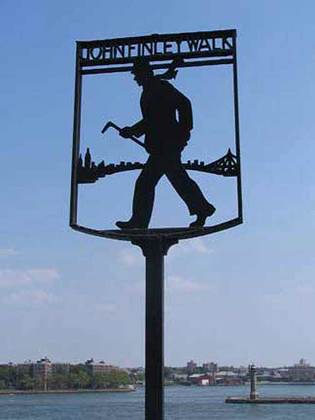 John Finley Walk, the top deck of FDR Dr., runs along the East River from E. 81st St. to Gracie Mansion where it loses its width and continues north to East Harlem. It’s similar to Promenade in Brooklyn Heights, with rather less spectacular views, though they’re still good. It was named for Harper’s Weekly editor and City College president John Finley (1863-1940). Finley Walk’s distinctive iron signs were designed by cartoonist Edwin Marcus and architect Harry Stevenson. 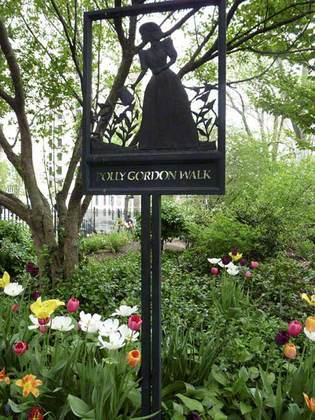 I’d thought that the John Finley sign was the only one of its kind, but leaving the walk and going west along W. 84th, or Gracie Square, I found the sign identifying it as Polly Gordon Walk. The sign commemorates Mary Rousmaniere “Polly” Gordon, a resident at #10 Gracie Square who was involved in community causes with her husband Al Gordon, a former CEO of Kidder Peabody, notably the local YWCA.

Gracie Square and nearby Gracie Terrace and mayoral residence Gracie Mansion are named for Scottish shipping entrepreneur Archibald Gracie (1755-1829) who purchased land at what was called Horn’s Hook after the Revolutionary War and built Gracie Mansion there in 1799. He received guests such as President John Quincy Adams and French monarch Louis Philippe. Gracie sold his estate in 1823 and it was acquired by New York City in 1891; its 11 acres were incorporated into Carl Schurz Park. Fiorello LaGuardia was the first NYC mayor to use it as a residence when he and his family moved in in 1942. 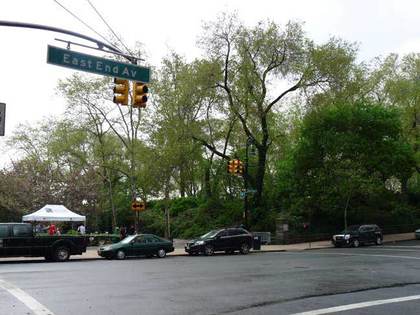 Carl Schurz Park, between East End Ave., FDR Dr. and E. 84th and 90th Sts., is named for a mid-19th century German immigrant (1829-1906) who became a U.S. Senator from Missouri (1869-1875), Rutherford Hayes’ Secretary of the Interior (1877-81), editor of the New York Tribune and Harper’s Weekly. A statue of Schurz can be found at Morningside Dr. and E. 116th St., and a lengthy avenue in Throgs Neck, Bronx, also commemorates him. Nearby Yorkville was heavily German in the past, and the park celebrates one of their own. His most famous quote was: “Our country right or wrong. When right, to be kept right; when wrong, to be put right.” 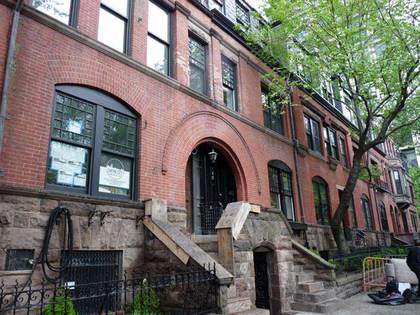 Manhattan and much of Brooklyn, unlike other older East Coast cities like Boston, Philly and even Newark and Jersey City, don’t have much in the way of dead ends and alleys. Records and older maps show that downtown Manhattan and Brooklyn had had lots of them in the past, but real estate is valuable in a concentrated area and many of these odd lanes have been de-mapped and then built over.

No such threat exists for Henderson Pl., on E. 86th St. between York and East End Aves. Henderson Pl. is its own Landmark District. The alley, and parts of E. 86th & 87th Sts. and East End Ave., are home to 24 rowhouses of the eclectic Queen Anne style built in 1883 by the firm of Lamb & Rich (who also built Sagamore Hill, Teddy Roosevelt’s Oyster Bay home) for developer John Henderson that are dwarfed by the high-rise apartment houses that are more typical of the area. Alfred Lunt and Lynn Fontanne, the famed husband-and-wife acting couple, lived on Henderson Place for years. The houses rented for just $650 in 1883!

Henderson Pl. was built as a development for persons “of modest means” but has become much more expensive in subsequent decades. In the mid-2000s, a Henderson Pl. house would cost seven figures. Only the east side of Henderson Pl. itself has retained the original brick dwellings; a high-rise apartment was built, replacing the homes on the west side, before the whole district could be landmarked.