Covid Finally Got Me

It wasn’t a cold, but it wasn’t a death sentence either. 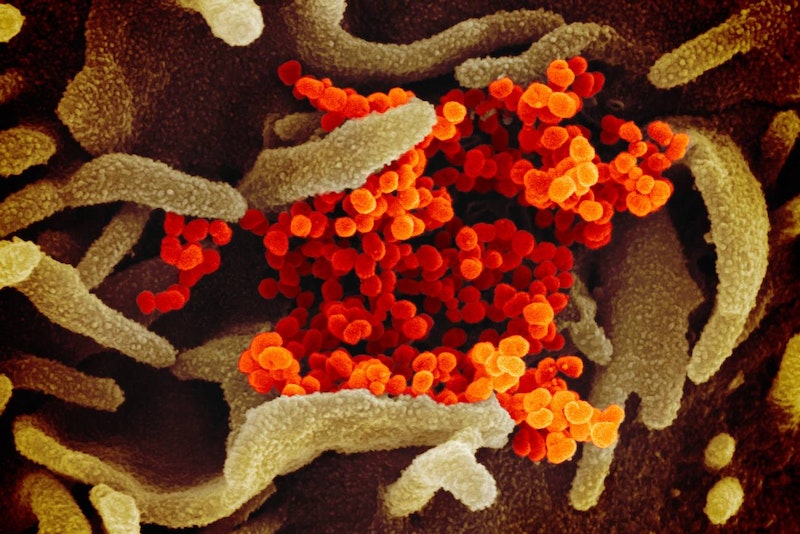 All good dramas need a compelling opening scene. Mine started with a migraine. Not an ordinary migraine like I get once or twice monthly. This was a leviathan, a pounding throbbing pulsating torment that blinded me for hours. The pain was what I imagine first-time hikers experience at 25,000 feet on Everest except I had no Sherpa to get me through.

I cancelled the art classes I was scheduled to teach and spent the day in bed. The pain subsided 12 hours later and the next morning I felt great and returned to work. My temperature was normal and I’d no reason to suspect Covid. That all changed while driving home. I was dizzy, nauseous and my vision became blurry. The headache returned and my nose ran like a faucet. When I got home, I ate soup and plopped into bed.

Around 1:00 a.m., I had a dream where an old friend said, “Test yourself now.” My t-shirt was drenched with sweat and my body shivered uncontrollably. I staggered to the bathroom, grabbed a Covid test kit and swabbed my nose. Two dark lines came up immediately. I woke my wife and told her I tested positive. She donned a mask and went back to sleep.

I took a long hot shower. In my feverish stupor, I visualized squiggly little demons floating in the air around me. They had scrunched-up faces and were laughing. The squigglies were actually the light flashes common to a migraine aura, precursor to a major headache. I drank a liter of water and tried eating chicken since protein sometimes keeps migraines at bay. Due to the nausea, I couldn’t eat. I fell back into bed and slept. When I woke, I had a 102-degree fever, full body aches and dizziness.

I’d managed to avoid getting sick since the start of the pandemic. This was a minor miracle since my job as an art teacher brought me into contact with multitudes of strangers in corporate settings, schools, day care centers and senior homes. I was twice vaccinated, once boosted and diligently wore masks. I encountered dozens of people who’d contracted Covid. A woman in her 30s I worked with at a senior home died from the disease. More than a dozen seniors I’d met were also Covid casualties.

My biggest fear was passing the virus to my wife. I knew the Omicron variants were less potent but also knew the illness was a crapshoot. In some cases symptoms were mild, others were sick months after infection. In Sun Tzu’s The Art of War, the ancient Chinese militarist wrote of the need to respect your enemy. It always bothered me to hear people say, “Covid is just a cold.” This showed a lack of deference for the millions who died from the disease. The moment I tested positive I knew death, though unlikely, was a possible outcome.

I contacted the Department of Public Health who issued me a prescription for Paxlovid. This involved a five-day course of six pills a day to reduce the potential for serious illness. I read about Paxlovid’s side effects, including a metallic taste, elevated blood pressure and diarrhea. The drug was hard on the kidneys and liver. A friend who was a nurse sensed my reticence. She said as long I got plenty of rest, I’d likely be okay without Paxlovid. This convinced me not to take the drug.

I opted instead for immune supplements like Vitamin C, Vitamin D3, Reishi mushrooms and zinc. My wife pulled out our Samson juicer and made concoctions of carrots, celery, beets, Swiss chard and dandelion greens. She also made a huge pot of fresh chicken soup. By day three, I felt better though I was exhausted. My wife set up an inflatable bed in the living room and we both wore masks around the house. Then she tested positive.

I consulted with friends and family who’d gone through Covid. Most said it lasted about 10 days, though the cough and fatigue lingered. My sister-in-law, an asthmatic, needed an albuterol inhaler to help with her breathing. Otherwise she recovered quickly. Several friends told me to watch out for the cytokine storm around Day 10. This was when the immune system fought back against the virus by releasing too many immune-friendly cytokines in the blood. This could cause fever, nausea, headaches or a feeling as if you were getting sick again.

On Day Four, I experienced Tony Soprano Belly. I won’t get into details but I learned why people lose weight during Covid. Throughout the illness, I had strange dreams. Early on I dreamed I was driving up a steep hill in a rickety vehicle. I nearly made it to the top when the car stalled. My wife helped me interpret the dream. The rickety car was my body, the hill was the illness, the car stalling was my subconscious telling me my Covid experience wasn’t over.

In another dream, I sat on an ocean reef while large waves pummeled me. The location was near a private airport and I watched as a space shuttle sped down the runway and attempted to ascend a tall mountain. As I looked on in horror, the shuttle struck the side of the mountain and crashed onto the tarmac. The cabin doors opened and astronauts rolled out, vomiting though still alive. The meaning of the dream was obvious. The ocean waves represented me getting thrashed by nature (i.e. Covid). The shuttle crashing meant I wasn’t healthy enough to resume everyday life. The vomiting astronauts indicated I was sick but wasn’t going to die.

By Day Six, my energy returned though I had a bad cough and brain fog. I ventured outside for a one-block walk to the mailbox. Returning home, I was breathing heavy. The virus had reached my lungs though it wasn’t terrible. Thankfully my wife was doing great. We continued juicing and watched movies. I put on my favorite comedy (Death at a Funeral) but the laughter triggered a coughing fit. I opted instead for an old Bogart film (Key Largo).

By the second week, I returned to work though I still had the cough. I tested positive on Day Eight, negative on Day Nine, then positive again on Day Ten. The Public Health nurse told me I was likely to test positive for the next few weeks since home tests detected dead virus cells.

On Day Eleven, my temperature was 97.2 and my energy was strong. I made sure to double-mask and keep distance from others. While teaching a morning art class, I felt a wave of dizziness. The room rolled. I steadied myself and sat down. I was accustomed to occasional bouts of vertigo in my ongoing battles with migraines. But this was unlike anything I’d ever experienced. The students continued making art, unaware of my plight.

Was this the cytokine storm? I downed a bottle of water and ate an apple. I closed my eyes and focused on my breathing. The dizziness passed. I ended class early and went for a protein-heavy lunch. I took a long nap before my next class. When I woke, I felt fine.

Around Day 14, I was shopping at Whole Foods when I heard a customer coughing. Her cough sounded just like mine. It was deep, resonant, heavy with phlegm. I was stunned to see she wasn’t wearing a mask. In the coming days, I encountered that same unmistakable Covid cough at a gas station, an art supply store, a CVS pharmacy and Starbucks. In each case the person was maskless. No wonder the pandemic is still with us.

It’s now nearly a month since I tested positive. My energy is strong and I’ve resumed my normal work schedule. I still have a faint cough and at various points, I’m overcome by exhaustion. My wife feels great and we’ve been able to resume hiking. We’re both excited for the new antibodies. I can’t say I’m fully back to normal but I’m better. Covid wasn’t a cold. But it wasn’t a death sentence either.