Don Quixote and the Power of Illusion

I think every great work of art has a sort of Will To Power, the desire to take center stage and never leave. 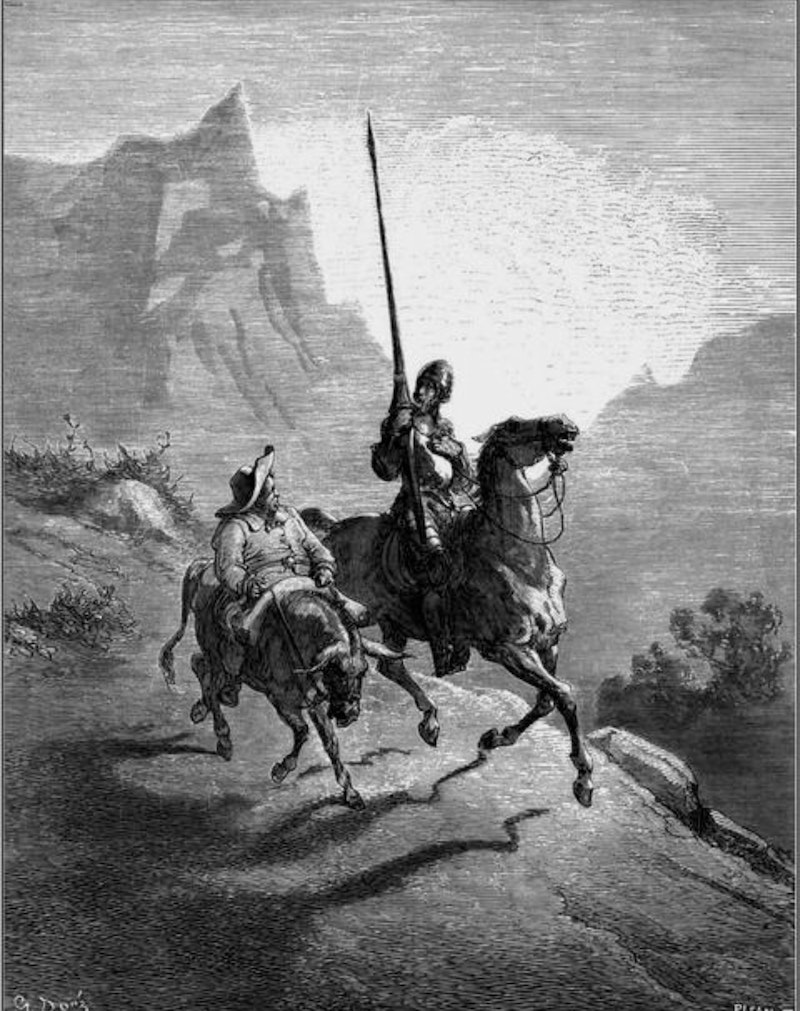 Ideas invade our minds, creating a substitute reality. They get in your head, and you have to work with them. As the current cliche goes “You can’t unsee them.” Whether psychological or emotional, I can’t say, but think that many artists, con men, religious and political leaders have always intuitively known this. It was saved for the 20th and 21st centuries to make a conscious undertaking out of it thanks to Edward Bernays, Madison Avenue and more recently, Big Data analysis. It’s as if our brain was a puzzle piece and then some external object inextricably joins with it. And it isn’t necessarily negative, for love operates much in the same way.

Cervantes’ Don Quixote tells the story of a man who becomes so obsessed by novels dealing with Knight-errants, (wandering Knights doing great deeds in the name of some unattainable beauty) that he decides to become one himself. The books are just fanciful romances but Quixote takes them as true histories, they “fit” with his mind, fulfill a need he has. He goes out into the world in the name of Dulcinea del Toboso, a simple country girl whom he reinvents in goddess-like perfection, to perform great deeds.

There’s another story, similar, yet from a reverse angle. The composer Richard Wagner, in a conversation recorded by his wife Cosima, was reported to have said just before the premier of his opera Tristan und Isolde, that he hoped that the performance would go badly. Cosima, perplexed, asked why he hoped for a bad performance. His response was that if it was a good performance, the audience would probably go mad. And though that’s outlandish as a claim, the effect that Tristan had on people at the time was so great as to verge on madness. I believe Wagner was one of the first composers who consciously understood and applied psychology directly to his works.

But it isn’t just Wagner. I think every great work of art has a sort of Will To Power, the desire to take center stage and never leave. Once you enter into a powerful work, it becomes a universe, to the exclusion of all others. Wagner, Shakespeare, Beethoven, Kubrick, Rembrandt, Van Gogh, to name a few, have had this exclusionary effect upon me. As it says in the Bible, a man may not serve two masters.

Speaking of the Bible, it’s perhaps the greatest of all texts for mesmerizing an audience. There’s something in its psycho-emotional-linguistic construction that’s hypnotizing. “And the Lord shall be smite them! The Lord shall raise his hand and smite the wicked in the land, the Lord shall not spare them. He shall smite the haughty! His anger shall burn against the arrogant, they shall wither in the dust. The fig trees shall bear no fruit, the proud cedars shall fall! Virgins shall tremble in their tents…” If you start to get to get into it, it can  take over. I read it often it but in small doses.

There’s a process at work here; call it manipulation. Manipulation is when we’re moved to do something without understanding why and what it was that moved us. Should life be a conscious or unconscious undertaking? I opt for consciousness, I think it shows respect for one’s self and for those with whom we interact. But then again illusion, irrationality and emotion play vital roles in our lives. “If it is love, it is madness, if it isn’t madness, it isn’t love.” That’s true. Consider as well that at the very end of the second and last volume of Cervantes’ masterpiece, when Don Quixote comes to his senses, and realizes that he’s been acting under a delusion, he immediately dies. This makes me wonder if Cervantes was expressing an unspoken truth—that it’s our illusions that keep us alive.