The Year of the Diamond Dogs

Win the Powerball, buy a nuke. 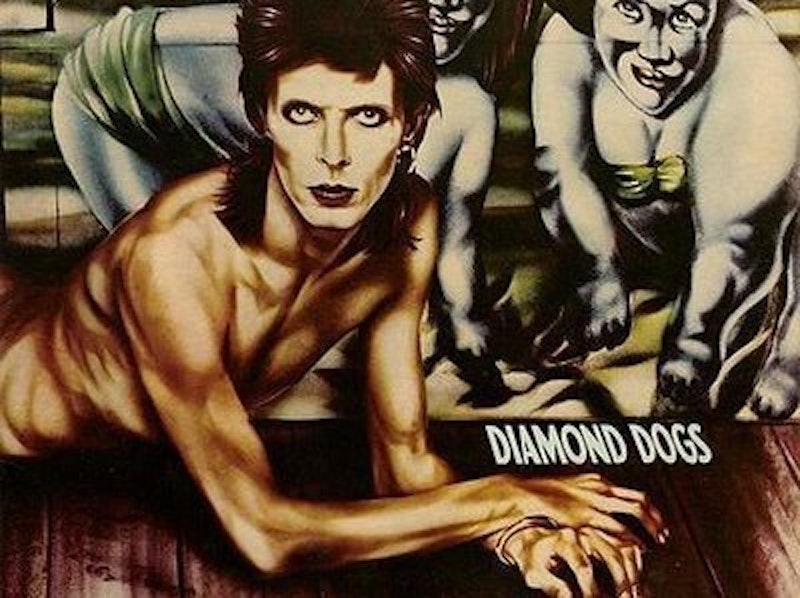 Watch now for the emerging Baby Boomer fixation on death. We’re starting to die off now, chasing our dearly departed pets and idols across the Rainbow Bridge. Good luck, kids! The most narcissistic generation of humans ever born is now gazing into the abyss, as the world stands on the brink of global thermonuclear war. The abyss tends to gaze back. Sometimes it waves or thumbs its nose. I have a talent for detecting patterns and the impending convergence of patterns. The entrails of the particular goat I’m examining now does not bode well for the future. Let’s be blunt and truthful. Let’s face the music and dance.

The NSDAP resurgence gains traction in Europe. War breaks out between the Caligula-inspired House Of Saud and civilized Iran. Iran’s victory is immediate. President Obama is assassinated by a white supremacist later exposed as a Mossad asset. Donald Trump thwarts an assassination attempt by pumping four neatly grouped rounds into the chest of his assailant from his own personal .40 caliber Glock. His assailant is discovered to be an Israeli carrying a Syrian passport. Hillary Clinton is successfully assassinated by a heavily tattooed and pierced hunchbacked Somalian transgendered HIV+ Death Metal Hip-Hop artist and anti-rape activist from Camden, NJ.

Camden happens. It’s like death. It’s happening all over: Ferguson, Oslo, Cologne, Baltimore, Helsinki. It seems to be a race war. That idea scares the shit out of white people. How do you cope with an adversary so intent on racial suicide? How do you respond to the concept of Jewry, the famously demonized “rootless cosmopolitans” (better euphemism than “Neocons,” certainly more honest) of Hitler’s ravings? The Boomer death obsession begins in the shadow of Los Alamos. The end of the globalist gamble is a worldwide resurgence of nationalism of the nastiest sort, and worse: the loosening of nuclear weapons protocols.

Win the Powerball, buy a nuke. It’s probably the best investment you could make. I’m sure there’s a connection in Ukraine, if not the Balkans. The Israelis would sell you a dud; forget them and their Paki buddies.

Here’s how it is now: I wake up just before dawn on a cold Monday morning just before the End Of The World and Daisy tells me that David Bowie is dead. It’s dark. Bowie once bragged that he could ask for a cigarette in any language. He died on Lafayette St., at home, next to the Puck Building.

Damon Lindelof had a fit when he found out that Netflix was showing an edited version of the famously ambiguous and controversial final episode of Lost. Apparently, they’d cut 18 minutes, including a vital reference to duct tape. At least they kept the part where everybody dies. They’re working on it. The 18-minutes part is weird. There were 18 minutes missing from Nixon’s famous tapes. Alexander Haig suggested that “sinister forces” were responsible for the vanished conversation.

The Boomer death obsession travels in origin from Los Alamos to the Grapevine Road to Charlie Starkweather and Dallas and all the way across America on an interstate paved with assassinations and thwarted dreams, paved with the bones of the unquiet dead. We were the first Americans to realize that we were soaked in blood, living on an Indian burial ground. Forget the Holocaust. Look around. Do you see any American Indians running any investment banks or media empires? Do American presidential candidates visit the reservations and swear fealty to their defense? How many cabinet positions have been filled by American Indians? Consider the case of Leonard Peltier versus Jonathan Pollard. America is a haunted house, and Jewish hoodoo won’t save it. Neither will Jesus.

The death-obsessed Baby Boomers have their fingers on the trigger like reckless adolescents playing with a Ouija board on acid under a full moon. We always wanted it, this bomb. You wake up one freezing Monday morning and David Bowie is dead. The Year Of The Diamond Dogs.