Manhattan’s Hudson Yards and the birds. 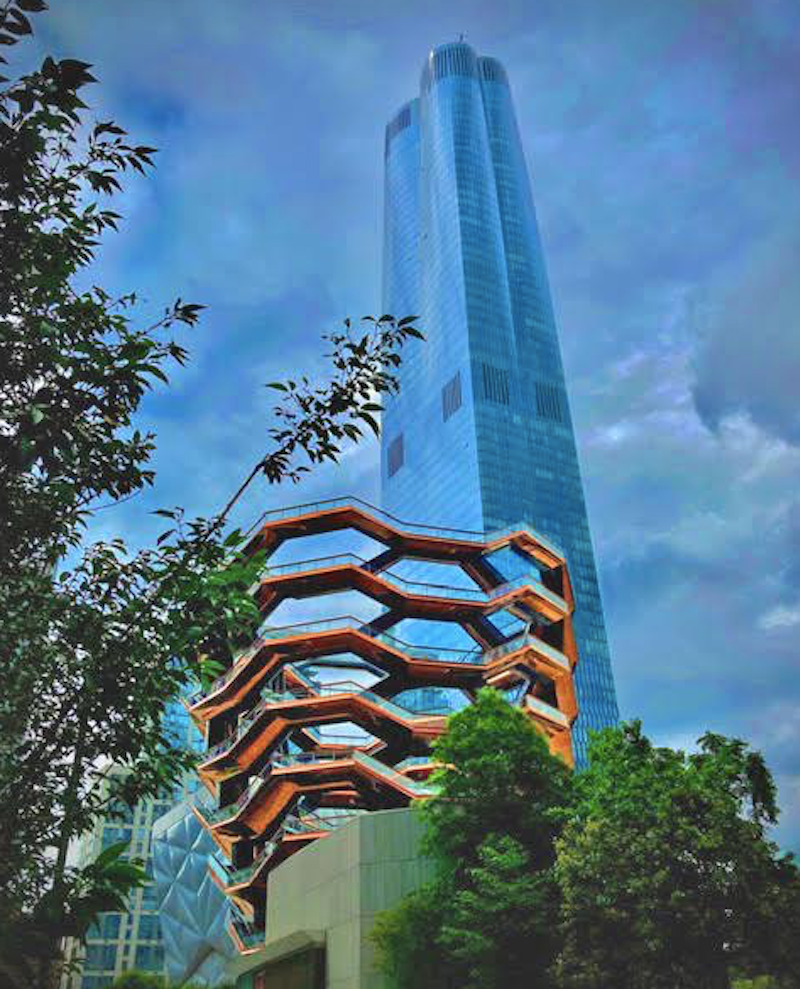 The Vessel in Hudson Yards’ foreground. Photo by Michael Gentile

I was sitting in a tomato red vinyl booth in the Cheyenne Diner on the corner of W. 33rd St. and 9th Ave. in the late-1990s. The Cheyenne was one of the last 24/7 diners left in New York City. Opened in the 1940s, it’s where New Yorkers went to eat, and for a brief time escape the madness of city life. I was sipping a cup of coffee when I noticed the decrepit, vacant lot across the street from the Post Office with its disintegrating sidewalk on the verge of collapse. Parking lots aren’t pleasant.

The property seemed forgotten, but it wasn’t. I made a mental note. On the way out the door, I grabbed one of those freebie wrapped peppermints by the cash register. Returning home nearby, freshly minted, I had a sour thought: I’m not going to get all choked-up about the parking lot being a goner. But time had come today: I better start looking for something; like another apartment. It was only the start of things to come. The Cheyenne Diner disappeared in 2008. Change is an uncanny experience when you know a page in life is turning.

Years later, Hudson Yards has no problem making its presence known by claiming to be “A template for the future of cities.” I can’t believe the enormous size of 30 Hudson Yards on 9th Ave. The 1296-foot tower has a petrifying Sword of Damocles observation deck called the “Edge” hanging off the top. I wonder if U2’s lead guitarist is bummed? This daunting, new cityscape of architectural monsters occupies an area once known as Death Avenue. “Over under sideways down” as the behemoth buildings rise through the mist scraping the heavens. It’s a perfect Instagram selfie background, which some have called “The Horror on the Hudson.”

One can imagine hearing the Wizard of Oz’s Winkie guards chanting, “O-Ee-Yah! Eoh-Ah!” on the way to the Wicked Witch’s castle. Ironically, the castle is “rumored” to be modeled after Castle Rock in the Hudson Highlands further north on the Hudson River across from West Point.

Part of the West Side complex occupies an area with a bad reputation dating back to the19th century. A chaotic mix of pedestrian and other street traffic shared the same roadway with active train tracks. At one point, railroad men with red flags called the West Side Cowboys patrolled on horses. After hundreds of fatal accidents, mostly children and jaywalkers, an elevated freight railroad track was built above notorious avenue in 1934 called the High Line. The north spur of the High Line concludes at Hudson Yards.

The High Line closed in 1980 and fell into disrepair. Saved from demolition by a grassroots community effort, it reopened as a park in 2009. The restoration was “too successful.” The project helped fuel massive real estate development all along the park.

After decades of negotiations and transactions between power brokers, developers and politicians; air rights were secured. A platform would be built on top of the West Side’s existing railyards. There’s only one way to build in New York City and that’s up. Construction began in 2012 on the 17 million square foot, privately-funded $25 billion project. The United States’ largest mega-development expansion occurred in my backyard. I moved.

No wonder some stay away from cities. The scale and magnitude of Hudson Yards makes an individual feel insignificant. When I finally visited to satisfy my curiosity, all I could think was, “Derealization here I come, I’m entering the void.” Is this beautiful? There’s no way to explain it, the empire strikes back.

It’s been a little over two years since its opening. So, how’s Hudson Yards doing? In my mind if you’re intrigued by design and architectural engineering, it delivers on all the essentials: immense splashy corporate, commercial and residential with views for those that can afford it; landscaped gardens with minimal trees, lots of sharp, shiny glass and steel angled edges; plus, glitz and glam shopping with restaurants and food options. There’s a lot of noticeable security; you get the feeling that “you are” being watched.

Hudson Yards’ inner workings remain a secret as it seeks to gain acceptance in a competitive environment. And there’s the conundrum; suburbanization becomes the new urbanism. However, there was one forgotten player: the birds.

The end of the world starts with Bodega Bay’s first attack in Alfred Hitchcock’s The Birds. As Tippi Hedren’s character Melanie Daniels arrives in a boat looking for Mitch Brenner; a bird swoops down and pecks her on the forehead. Alfred Hitchcock cuts to a closeup of a spot of blood on her white-glove fingertip. Nice touch. It was a gull.

Typically choosing sunrise, flocks of gulls fly above Manhattan daily. It’s a birder’s delight in Midtown, if you listen carefully you can hear them above laughing. The displaced birds seem annoyed and can’t stop making noise.

Millions of birds use the Hudson River as a migratory route. Until a few years ago, gulls were a common sight along the river. When Hudson Yards’ skyline took over their airspace with its unsettling sky-glow from artificial light sources, the birds became confused.

The gulls are great adapters, they shifted flight patterns and moved further inland. They’re now flying southeast around Moynihan Station and all the way south to the Fashion Institute of Technology (FIT). These professional foragers have an incredible knack for spotting one of their favorite dishes from a distance, the lost French fry. The gulls aren’t shy, they can be backwards baseball cap wearing, bro-boyish aggressive. With increasing populations, the birds scavenge landfills and work seaside boardwalks.

A majority of the local flock are Ring-billed Gulls and Herring Gulls. Some might see the gulls as a quality of life issue. Gulls aren’t a part of any current active conservation efforts I know of, so we can coexist.

Keep in mind the birds aren’t the only ones having difficulty adjusting to Hudson Yards. The people who live close by in the surrounding communities of North Chelsea and Hell’s Kitchen are curious if the vertical, high-density sprawl poses any health risks. Benefits for neighbors seem slim.

At various times and seasons, light pollution from Hudson Yards creates a disrupting sun glare that reflects on surrounding neighborhood buildings. Some rays register blocks away on the Penn South apartment complex. All things considered Hudson Yards remains unique in terms of what engineering can achieve. Meanwhile, the gulls hover over FIT and greet the incoming freshman.

Like a foreboding Ouija board prediction, already terrible events at Hudson Yards have linked it to Death Avenue’s dark past. The copper, art sculpture tourist attraction The Vessel “meant to be climbed and explored with others” has proved dangerous for public use. Four people, including the latest, a 14-year-old boy to which his family bore witness, have jumped to their deaths by suicide. Nevertheless, the crowds still come as Hudson Yards remains steadfast without blinking an eye. The Vessel is currently closed.