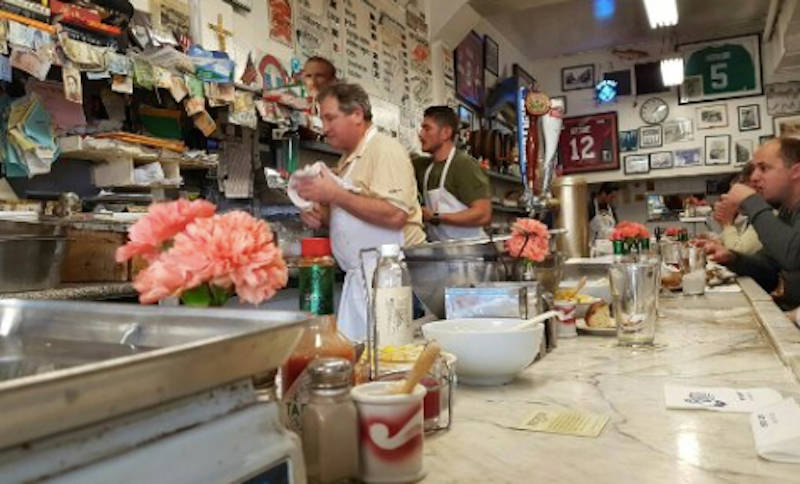 Last week in San Francisco, a man in his 20s named Tin Dinh was ordering lunch with two companions at the popular Swan Oyster Depot. Jimmy Sancimino, a member of the family that's owned the raw bar restaurant for decades, was taking the order, but he stepped away, for reasons unknown, before it was completed. Dinh's party then gave the rest of their order to another server, which isn't kosher there. When Sancimino returned to finish up the order, he got annoyed to find out he'd been bypassed, and then walked around the place trying to find the other server involved while pointing a finger in Dinh's direction and saying, "dim sum."

Dinh, a Vietnamese immigrant, became irate, thinking "dim sum" was some new racial slur, but a server explained that it's their restaurant lingo for customers who order from more than one server, like what happens at a Chinese dim sum restaurant.

In a sane society, this misunderstanding would've been put to rest with that explanation. Instead, Dinh took his crusade to social media, perhaps sensing that his moment to go viral as a martyr had arrived. The resultant outrage was such that Yelp had to freeze the restaurant's web page to halt the abusive comments made by people who had no idea what actually happened that day.

While it's clear that Sancimino hadn't intended to loudly target Dinh with a racial smear—no restaurant can get away with such blatant behavior—intent no longer matters in the microaggression arena. Dinh made that point explicitly with this statement: "It’s not just the intent," he said, "it’s impact. That’s where we all need to think about it and really have a conversation."

But what is there to talk about? No number of conversations could ever prevent such misunderstandings. The only thing to do is talk about them after they occur and iron things out, but that's no longer possible with people like Tin Dinh whose only concern is their feelings.

According to Eater, "Dinh wants the Sanciminos to acknowledge that even if staff use the term 'dim sum' as a neutral shorthand not referring to Asians, doing so still falls in the realm of racist, harmful behavior." So it's "neutral," but still racist. Tin Dinh's social media post, however, said the term "reinforces the stereotype that all Asian people look the same," and in another post he called the restaurant "racist." Thousands of responders agreed. Dinh expanded his campaign against Swan by announcing that the restaurant gets many food poisoning complaints, and doesn’t follow proper COVID protocol. And in what's a common attack tactic among the online aggrieved, he posted multiple photos of Jimmy Sancimino, circling his face in group photos. So far, Dinh hasn't doxxed Sancimino.

Eater slanted its piece on the incident towards Dinh. This was the headline: "A San Francisco Oyster Institution Was Called Out for Racism. Will It Change?" The call-out is all that matters, not the facts. The San Francisco Chronicle tried for a bit more balance, but sullied its story by including comments from chef/activist Preeti Mistry, who thought it was relevant to point out that the professional kitchen tool known as a "chinois" is "problematic" because it's also the French word for Chinese people, and the conical-shaped implement (Mistry wants it to be called a "conical strainer") was named due to its resemblance to a Chinese laborer’s hat.

Matt Charnock reported on the Swan Oyster Depot dust-up for The Bold Italic. Charnock wrote that the incident was "downright racist" and "skin-crawling" without even bothering to provide one detail from the restaurant's point of view. "There’s no gray area here," he reported, falsely. The writer, however, did think it was germane to include the fact that he once worked at a noodle bar in Austin, Texas that "dabbled in dim sum." Charnock then descended from hack journalism into the gibberish of the woke: "Sancimino, conscious (sic) or not, participated in the white male superiority complex that’s continued to morally divide and racially segregate; to dehumanize certain minorities in this country. It’s a dangerous narrative to evoke… one that exists as a common denominator for every genocide in history.”

Given our current frenzied and confused political climate, can anyone be surprised that Sancimino's being linked to genocide? Dinh isn’t accepting the explanation Swan Oyster Depot provided him, even though it's obviously true. "I call complete bullshit on that,” Dinh told SFGATE, referring to the explanation. "And maybe the reason why they use it was it was busy like a dim sum restaurant." Even though they told him specifically why they used the term, Dinh thinks it's because the restaurant was busy?

Moreover, he wrote this on Instagram: "To use a dish from a different culture to specifically point out your customers is absolutely disrespectful. Why not just say 'help' or another word that does not involve someone else’s culture? First of all, dim sum does not involve Dinh's culture—he's Vietnamese not Chinese, and dim sum isn't a part of Vietnamese culture. Also, how in the hell would saying "help" in this situation convey the information Jimmy Sancimino wanted to convey?"

Dinh's all over the place. He sounds confused. Even Eater admits that "Dinh acknowledged that the restaurant didn’t have any malice," but Dinh is still insisting on an apology. What is there to apologize for when it was a simple misunderstanding? Jimmy Sancimino could apologize to him for being rude (he allegedly called Dinh a "kid"), but Swan Oyster Depot, which used to be my neighborhood lunch place, is a rough-and-tumble place specializing in blue-collar hospitality. It's not for the timid. If you're a newcomer there, you may get your feathers ruffled.

Maybe the "conversation we need to have"—a phrase that needs to be excised from the English language—is whether or not Tim Dinh owes Swan Oyster Depot an apology for rushing immediately to social media to call the restaurant "racist" even though he's acknowledged there was no intent to be racist. Not everything is acceptable when you're trying to get your 15 minutes of Internet fame.