The Xenotext: A Living Poem

Bök’s work deserves to live simply for the beauty and complexity of its language. 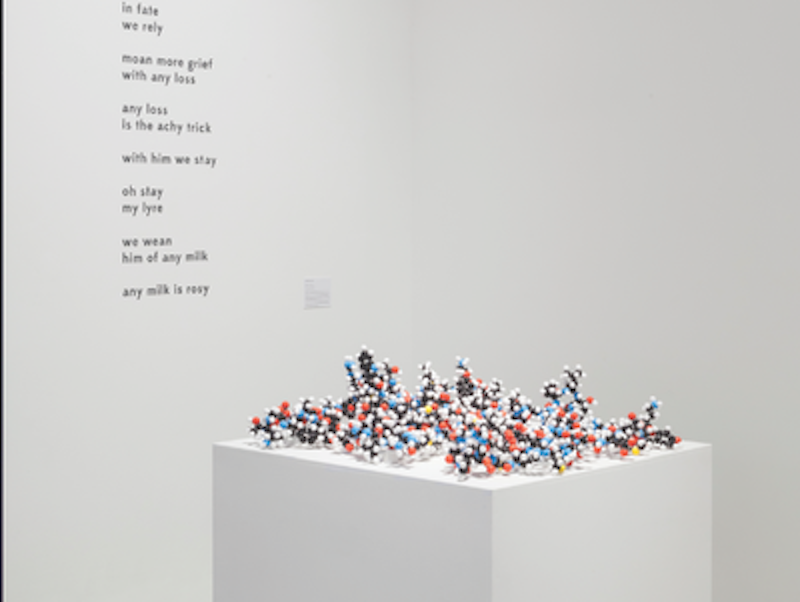 Christian Bök’s The Xenotext, Book 1 is a collection of linked poems on the theme of extinction, immortality, and poetry. And it’s the product of a desire to write poetry that will last as long as life on Earth. Bök’s about to fulfill his desire, and that’s no hyperbole. The Xenotext is part of a larger project using genetic manipulation to create a collaboration of poet and bacterium—one that’ll be worked into the DNA of a living organism. This first book, the first of two volumes, introduces themes and aspects of genetic science key to understanding Bök’s plans.

Bök wrote a sonnet, translated it into a DNA sequence, and is working to implant that DNA into a microbe capable of surviving even deep space. The DNA will tell the microbe to generate a protein that can be decoded into another poem; the microbe will collaborate with him. So far Bök’s gotten it to work in an E. coli bacterium. He ultimately intends to write his DNA sonnet into a microbe called D. radiodurans. The project to date has taken him 11 years and over $100,000.

Oddly, the poem Bök’s worked so hard to encode into an everlasting bacterium isn’t included in The Xenotext, Book 1. Instead the book contains several suites of poems meditating on poetry, genetic science, and how one can inspire the other. Bök works with themes relevant to the overall project—love, death, immortality—and grapples with the Western pastoral tradition. He’s consciously revising the relation of the poet to nature, inscribing a poem into a living thing and turning that other life into a poet; so, aware of the symbolic ramifications, Bök rewrites the tradition of nature poetry.

The book’s got five sections, plus a concluding “Vita Explicata” that outlines some of the themes of the texts and what Bök’s planning to do with them. “The Late Heavy Bombardment” is a prose poem imagining the chaos of Earth 3.8 billion years ago, when life was being born among a meteoric bombardment. This was the Hadean period, a reference which sets up repeated references in the book to the myth of Orpheus, the greatest of bards who descended into Hades to recover his lost love Eurydice. “Orpheus” is also the title of the poem Bök will write into D. radiodurans’ DNA, and “Eurydice” will be its response.

Therefore, following the theatrical apocalypse of “The Late Heavy Bombardment,” “Colony Collapse Disorder” begins with an unrhymed sonnet called “The Nocturne of Orpheus.” Bök’s cleverness is on full display here: the sonnet’s a double acrostic, with the first letters and last letters of each line spelling out the dedication of the book as a whole—“the maiden in her dark pale meadow,” apparently another reference to Eurydice. “The Nocturne” is also an anagram of Keats’ sonnet “When I Have Fears That I May Cease To Be,” a meditation on the fear of mortality by perhaps the greatest English poet who died far too young.

Bök then presents a sonnet sequence translating Book IV of Virgil’s Georgics, which begins with the poet giving advice on beekeeping—human beings overseeing and manipulating simpler forms of life, as Bök manipulates microbes—and moves on to a retelling of the Orpheus myth. “The Xenagogue” follows, a sonnet which imagines a poet guided through Hell in search of his lost love. So that’s Orpheus, but coming on the heels of a translation of Virgil, it’s difficult not to think of Dante being guided by Virgil in The Divine Comedy. Myths crash into each other; imagery of bees and hives will recur throughout the book, echoing these stories of poets in hell.

“The March of the Nucleotides” is the most varied section of the book. It begins with “The Central Dogma,” which briefly explains the basics of DNA and genetic science alongside brief poetic reflections. “Genetic Engineering” revises a song by new wave group Orchestral Manoeuvers in the Dark, creating a poem about language and “infernal children, the offspring/of your hives,” thus again creating a kind of nexus of the book’s recurring imagery: hell and bees and children, codes and genetic splices and the future. Then “The Nucleobases” is a series of five short poems based on the five nucleobases, parts of the DNA and RNA molecules. Adenine is made of 15 atoms, five each of carbon, hydrogen, and nitrogen (C5H5N5), so Bök’s poem “Adenine” has 15 words, five starting with “c,” five with “h,” and five with “n.” Again these poems are about honeybees; chemical maps of the nucleobases show the familiar hexagonal shape of honeycomb cells. And as always, there’s a total command of poetic form inspired by hard science.

“The Genetic Code” presents more scientific concepts, then “The March of the Nucleotides” gives us a set of poems that spell out a DNA sequence—every word beginning with “a,” “c,” “g,” or “t,” and so standing for the four DNA nucleotides—followed by computer-generated models of what the resulting protein would look like. “Death Sets A Thing Significant” presents another series of models, using the same computer process to generate a protein based on an Emily Dickinson poem. “Each Orchard Claims its Realm” concludes with a brief discussion of genetic engineering on plants: a strain of the flower called the thale cress, we are told, has been altered so that it includes a line of The Georgics in its DNA, giving new context to Bök’s use of the poem. Another piece of translation from The Georgics faces a brief report of a plan to encode the contents of Wikipedia into the genetic code of an apple.

The fourth section of the book, “The Virelay of the Amino Acids,” presents a series of 20 brief acrostic poems based on the chemical composition of the 20 amino acids, all reflecting on heroes and the limits of fame. “Alpha Helix” concludes the book with an inversion of the prose poetry of “The Late Heavy Bombardment,” meditating on the presence of the spiral image within life, and on the potency of life itself—and of the desire to write and make art. The “Vita Explicata” is a necessary key to the interrelationships of all these texts, as well as an explanation of what will come next.

It’s an incredibly rich structure filled with cross-referenced concepts. There’s an unrelenting cleverness to the book, an icy crystalline intelligence that’s always finding new angles from which to approach a few key concepts. These are big concepts—death, love, hell. But the density of Bök’s approach, his intensely thought-through forms, gives them new meaning. Especially since they’re a part of a deeper project, literalising poetic immortality.

The Xenotext is deep in dialogue with both past and future. The rewriting of Keats and OMD and Dickinson becomes linked to the rewriting of DNA, to ancient myth, to Roman beekeepers tending their hives. Among everything else he’s doing, Bök’s updating the pastoral. Virgil and Keats looked out on an external nature manipulated by human action. Human manipulation’s grown exponentially more sophisticated, and Bök’s not afraid to search for new poetic metaphors in modern science. He subtly makes a case that the traditional nature poetry was based on actual observation of nature, on practical animal husbandry, and then creates a modern nature poetry based on the modern equivalent of animal husbandry—genetic science.

Ultimately Bök’s work deserves to live simply for the beauty and complexity of its language. His writing is precise and evocative. Bök states that this first book of The Xenotext is an “infernal grimoire” outlining the spells he’ll use. Science moves quickly; it’s been 15 years since Bök’s last book, Eunoia, itself five years in the making. Who can say what the second book of The Xenotext will look like? Enough to say that we have this one, and have Bök’s practical instructions for the attainment of immortality. That’s no negligible accomplishment.