We are put on this Earth by the Holy Lord to suffer and die. 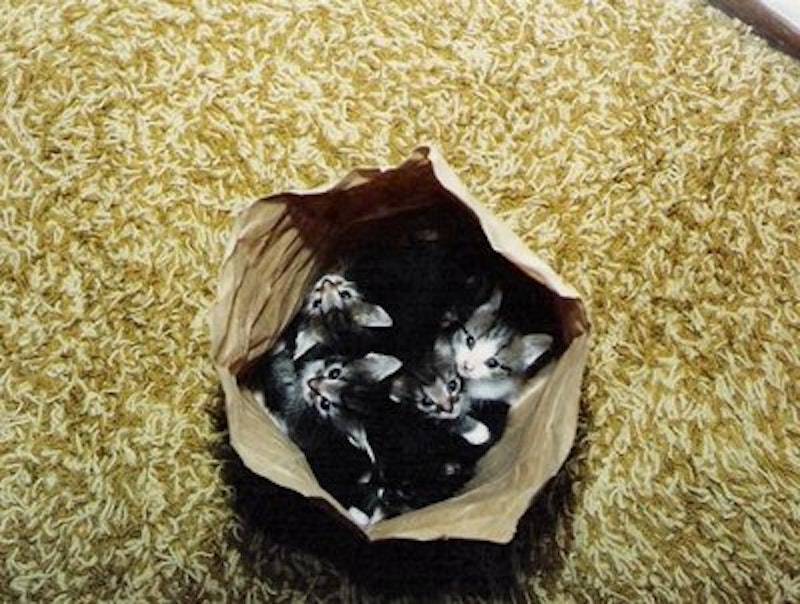 Another week of godly work has passed here on our Indiana property. Old Nessie, the tabby cat that lives on our homestead, delivered her latest litter of kittens in Brother Aiden’s outbuilding, and this time it was my turn to drown them.

“That’s disgusting,” said Michael, the young Yale graduate recently returned to this, his Hoosier hometown, and of whom I have written (he and I do not often see eye to eye). He had dropped by to deliver a hundredweight of spelt. He talks often about departing for Chicago forthwith, and indeed I think he will be happier there than here.

“Drowning is what country people have done with unwanted kittens and puppies for eons, son,” Brother Aiden told the lad. “We can’t have a property crawling with filthy cats.”

“That is the most barbaric goddamn thing I’ve ever heard.”

“Well, you haven’t heard much then,” I replied. I reminded him that God had granted Man dominion over beasts and relayed to him an apposite tradition from the life of Saint Barsanuphius of Optina. But as usual Michael chose not to “get it.”

Carrying the squealing, squirming kittens in the sack, I set off for the pond to commit this small act of necessary cruelty. A swing of the brick-weighted bag and the deed was done. Crossing myself, I said a prayer to Saint Seraphim of Sarov. Yes, disagreeable. But soon my somber mood lifted. We are put on this earth by the Holy Lord to suffer and die, and kittens are no exception. There is solace in accepting this. As I scuffed back to the house in my sandals, it occurred to me that I was ignorant of what, according to Russian Orthodox theology, happens to animals’ souls after they die. Not for the first time I find that my zeal for my adopted faith outstrips my science. I must study more.

Back to the Benedict Option. This is the idea, much discussed in traditional conservative circles, that small-o orthodox religious believers must strategically retreat from society in order to shore up their faith and community in the face of a “culture” hostile to them (as witness the recent fad for “transgenderism” and the hysteria in North Carolina). The American Conservative’s Rod Dreher is the foremost theorist of this concept. But despite his yeoman’s work, there remains a lack of clarity as to what taking the Benedict Option will, in practical terms, mean.

As it happens, my community has been living the Benedict Option for years here in rural Indiana, and so I feel not unqualified to add my grain of wisdom to this fascinating conversation. My first bit of advice involves husbandry—for the Benedict Option, properly conceived, must revolve around traditional farming. Brother Aiden and I initially sought to model our community on the ancient Russian peasant obschina, or village commune, complete with crop rotations in line with the Slavic rustic calendar and the distribution of arable land according to the pre-Stolypin Russian rural schema. You will smile at our utopian presumption! We were naïve indeed, and were forced to abandon this scheme for numerous reasons.

Not all of these reasons were practical. In reading the work of the historian of Russia Dr. Moishe Lewin, for example, I learned that there were good reasons for which we should not uncritically take the Russian peasant as a model. For one thing, the Russian peasantry’s Orthodoxy contained residual pagan elements that struck Aiden and me as blasphemous. But more importantly, the Russian commune granted to its womenfolk a degree of authority (especially within the house, or khata) that Brother Aiden and I could not abide.

Our goal in setting up our traditional community was most emphatically not to endorse, even backhandedly, a “liberation” of women that is in fact consistent with the Permanent Sexual Revolution. Thus we were compelled to seek a model closer to home.

I will describe the model we did choose in my next diary installment.