The Butter and Egg District 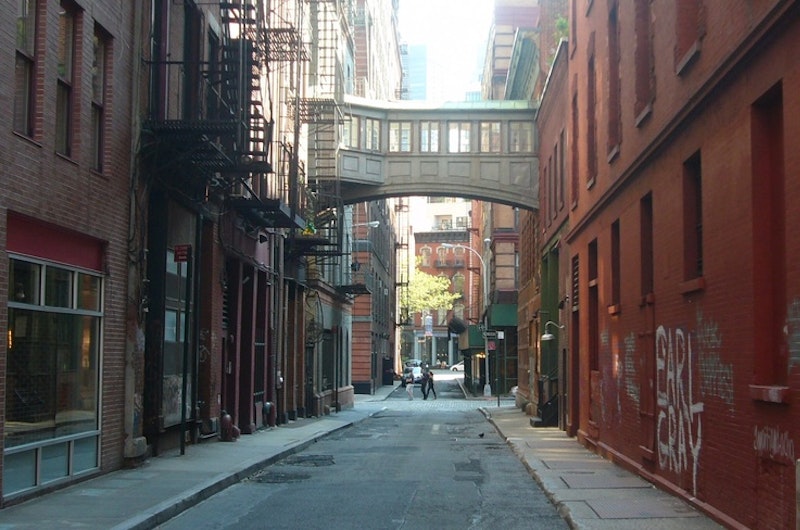 One of my favorite lower Manhattan streets is Staple Street, which runs two blocks north between Duane and Harrison Streets, just west of Hudson. Mystery surrounds the name of the street, but rest assured, it has nothing to do with Swingline or Bostitch.

Some sources, such as Henry Moscow in Hagstrom Maps’ The Street Book, say that the name refers to the unloading of goods, or “staples” to the numerous markets that were located in the Lower West Side beginning in the Dutch colonial era. However, the NYC Landmarks Designation Report for Tribeca West disputes that derivation and prefers the explanation that most of the streets in this area refer to political figures, local prominent residents or people associated with Trinity Church, and notes a John J. Staples-owned property nearby. Also, the word may merely be a corruption of the word “stable” and in the colonial era, there were certainly many of those nearby. 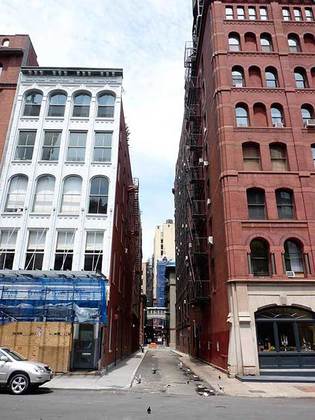 From Duane Street, Staple Street looks like a small space between buildings, until you get next to it. In this case the buildings are 171 Duane Street and the 10-story brick Schepp Building, designed by Stephen Decatur Hatch in 1880 as a factory, warehouse, and office building. It was named for importer Leopold Schepp, whose most notable product was dried coconut.

As for 171 Duane, in the very early 19th Century, a one-room schoolhouse occupied the space, but around 1828 a three-story Federal-style residential building went up in its place, and in 1859 it was raised to five stories with the present cast-iron front appended to the exterior. By the 1880s the building housed coffee and spice wholesalers, and beginning in the 1940s, egg and butter wholesalers M.J. King occupied the ground floor and did so for several decades. This part of town was known as the “butter and egg” district for many years.

The 19th Century iron shutters that covered the windows on the Staple Street side were recently removed as part of an overall building renovation. 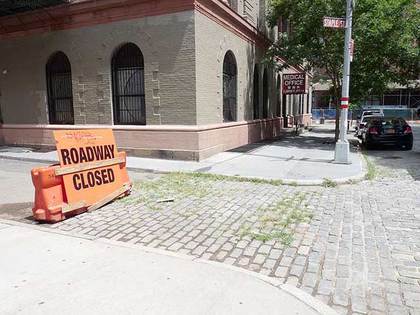 Like most NYC streets, Staple Street was once Belgian-blocked, and indeed, Jay Street, which Staple Street intersects, has been allowed to retain the paving. The sidewalk with the metal edge is relatively new and probably goes back to the 1970s or '80s.

Staple Street has undergone a complete transformation from when it was laid out just after 1800 as a private access lane to stables serving Hudson Street townhouses. The stables and townhouses have all vanished. 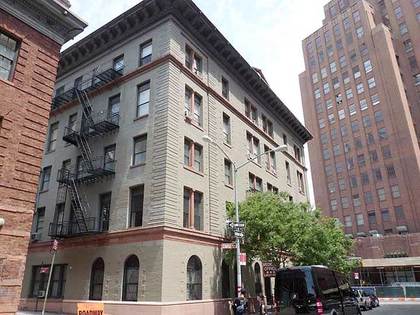 Two buildings on either side of Staple Street at Jay Street were at one time associated with New York Hospital. The first, fronting on Hudson with its back facing the east side of Staple, was constructed in 1893 (Josiah Cady, arch.) as the New York Hospital’s House of Relief, or as we say today, emergency room. When the House of Relief was built, NYH was uptown, at 5th Avenue and 15th Street. The hospital had been established in 1771. After a merger in 1998 it became New York-Presbyterian Hospital. 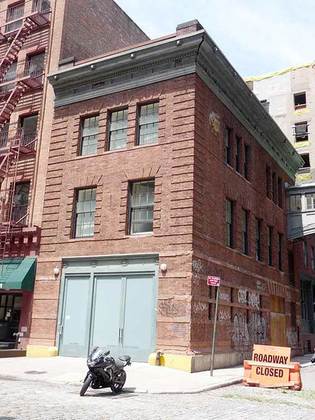 The other NYH building is on the west side of Staple Street at #9 Jay Street. It was built in 1907 as a laundry building and stable serving the House of Relief on the opposite side.  The most interesting aspect of the building is a terra cotta cartouche on the Staple Street side by the 3rd floor windows. 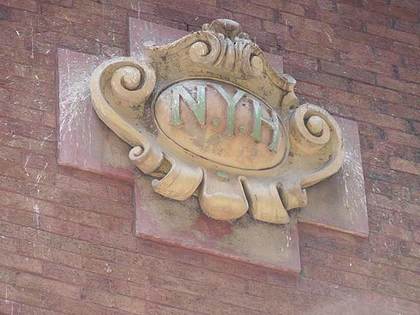 Somehow this plaque bearing the initials NYH has survived, despite several building renovations over the years. It resembles similar shields found in older NYC subway stations, built in the same decade as this NYH annex, that carry the initial letter of the station stop. 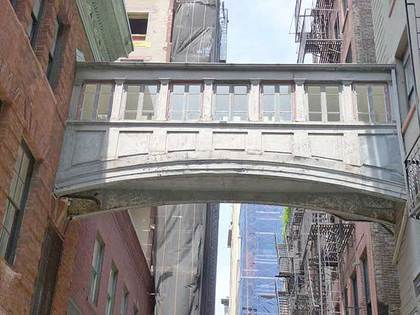 And now for the element that has attracted me to Staple Street like a bee to a picnic for two decades—its bridge. It’s made of cast iron and has picture windows along the sides. It connects the third floors of the House of Relief with the laundry/stables. The Landmarks Designation Report states merely that it is a “later addition, designer undetermined” but it can be no older than 1907. I suppose I’m fascinated with it because while there are many older or more recent pedestrian footbridges connecting buildings around town, they’re usually high above the street, and this one spans one of NYC’s more obscure alleys. It’s Staple Street’s trademark—its hidden nature has saved it.

While both NYH buildings were converted to residential as early as the 1980s, the accessibility of the bridge is a mystery to me. Perhaps some residents have the key to the inevitably locked doors that go to the walkway.

In late 2015, both buildings on either side of the walkway were on sale for a package deal worth millions. Someone may have their own private cross-street walkway if that deal goes through.