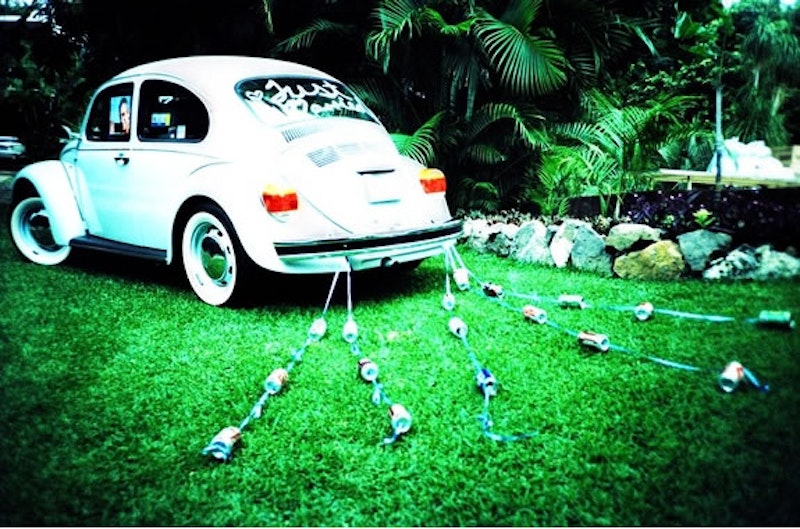 Weddings invite hyperbole, but my—sorry, “our”—big day seemed nearly perfect in part because of its imperfections. The bridal party was late to the church, by all of 10 minutes last Saturday. The best man almost didn’t make it to the wedding, due to a canceled flight and stolen wallet. Kid brother Christopher was drafted as the best man stand-in, because he knew the moves from rehearsal. He paced nervously waiting for the bridesmaids to arrive with the rings and barked at me to turn around lest I see the bride too soon and ruin everything. My father-in-law Len went to hug his daughter before handing her off. He knocked off Anj’s veil and scrambled to put it back. The physical comedy of that replaced nervous waterworks with much laughter.

We were married both holding a crucifix, which will soon be tacked up somewhere in our house. Leave it to my Canadian wife with a masters in theology to set her sights on an obscure Croatian tradition and say, “Wouldn’t that make a nice addition to our ceremony?” Within the bounds of Catholic tradition, the ceremony was about as ecumenical as we could muster. It was a wedding, not a wedding Mass. My dad, a Protestant minister, delivered a reading from 1st John. One of the prayers of the faithful was an appeal for “Christian unity,” and the reader was Orthodox. During the Our Father, the Catholics, mostly on Anj’s side, paused where they were supposed to, after the “deliver us from evil” to let the priest have his say. Others, mostly on my side, barreled through. “Half of us are Baptists,” Father Joseph said graciously and moved on.

There were so many other great moments to remember from the wedding and reception, but I want to brag about a few things. Everybody loved the food. We went with Chinese food, because we both love it and had never heard of anybody doing that at a wedding. I took charge of that, to control both cost and quality, getting a few friends who are cooks do the honors and even writing the fortunes in the fortune cookies. “You will hurt your foot” was one that I stole from a Joseph Heller novel. There was much dancing. Splice Today readers helped us out there by suggesting songs to groove to. One dance off, between Real Clear Religion editor Nick Hahn with “moves like Jackson” and my cousin, the rapper Rome, was off-the-charts.

And of course my eight groomsmen, sporting gray pinstripe suits and Jerry Garcia ties. I won’t spill the beans on best man Jim Antle’s toast that he said he was going to re-use for my eulogy. But when Anj and yours truly got up, I looked out on my two great brothers, on former roommates Jim and Robert VerBruggen, on business partner Evan, at fellow Jimmy Hoffa Jr. denouncer Vinnie the V., on fast friends Al Canata and RiShawn Biddle, and just couldn’t help it. I told the hundred-plus people assembled in the ferry terminal, “Any of these men I would gladly take a bullet for—but not in the chest.”