The World Is Now Gray

Broken clocks must no longer be correct twice a day. 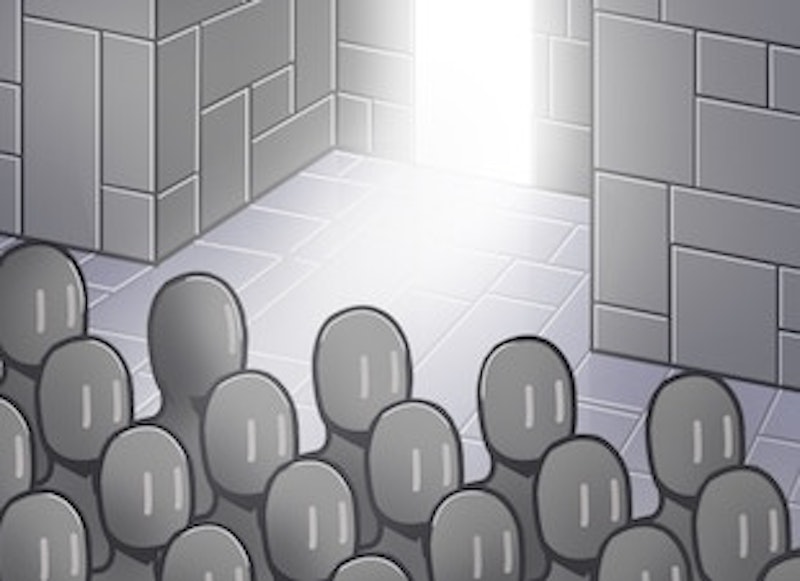 Everything you believe is correct, and everyone who disagrees is a moron. This is the new reality, and I’ll affirm your beliefs without knowing them because this isn’t an individual affirmation; it's a mantra used by all points of view.

Did the biologist hurt your feelings? Well, they're an idiot, and if you ever search for academic publications, it's best to ignore anything they've ever said. If you're offended by some dude saying, "love is love" and kissing his boyfriend, just write them off as prats, who know not the path of god.

It’s no longer enough to dismiss a belief; you must dismiss everything any individual says immediately following any opinion you disagree with coming to light. As a matter of fact, anyone who even follows a person you dub unsavory should be ignored because to read a book or follow someone on Twitter is always a wholesale acceptance and endorsement of anything they’ve ever said.

Biology isn't real, but it's well known that some aspects of our human corporeal form can’t accept someone like Sam Harris as an expert on meditation, without also holding as gospel every word the man has said. Likewise, any comedian who's ever told an offensive joke must be forever viewed as unfunny. Sarah Silverman can’t be acknowledged as funny; in 2007, she did an offensive sketch.

Oh, and if you're friends with PewDiePie, you’re a white supremacist. It doesn't matter, if like Ethan Klein, you're Jewish, and met your wife at Yad Vashem (The World Holocaust Remembrance Center) while you were in Israel on birthright. Simple association with someone The Wall Street Journal said was anti-Semitic should forever taint you.

Broken clocks must no longer be correct twice a day; they must be viewed as wrong, 100 percent of the time. We have no room for understanding or nuance, the world is black and white, and we don't see color. The world is now gray, and we only see shades of gray. Issues like genocide I hope are universally viewed as tragedies, but genocides are trivialized when everyone is "Hitler" or "Stalin."

I hate to red pill you; almost nothing is as black and white as death camps, the world is gray, and very few things are so cut and dry that anyone following someone you disagree with should be ignored. Let's look at drug policy, an issue many try to frame as black and white. During a debate between Ted Cruz and Beto O'Rourke, Cruz once said, "Legalizing marijuana is a question that I think reasonable minds can differ. I have had a libertarian bent myself. I think Colorado can decide one way. I think Texas can decide another. Congressman O'Rourke did not stop with marijuana. He introduced and advocated for a resolution in the El Paso city council, calling for a national debate on legalizing all narcotics. That includes heroin, Fentanyl, cocaine. That is not a reasonable issue on which people can disagree."

Cannabis currently is less legal than fentanyl and cocaine. Fentanyl and cocaine are classified as Schedule II drugs by the DEA, while marijuana is a Schedule I drug. Fentanyl patches are prescribed for chronic pain in patients who are tolerant to opioid therapy; for example, someone with cancer. Cocaine is still sometimes used as a local anesthetic.

But without account for the current legal, medical uses of drugs Cruz named, fentanyl and cocaine are far less restrictive for research than marijuana due to the scheduling of the drug. Researchers in the US, face challenges researching cannabis even with a growing body of evidence that the "devils lettuce" is an effective treatment for Epilepsy.

Let's take all medical applications out of consideration. The Lancet published a study called Drug harms in the UK: A multi-criterion decision analysis, reviewing a range of drugs, scored by factors broadly categorized as harm to user and damage to society, without considering medical uses. According to this study conducted by David Nutt (at the time the UK government's chief drug adviser), the harms of cocaine and heroin are lower than those of alcohol.

Perhaps reasonable minds can differ about far more than the legalization of drugs? Reasonable people can disagree about most things. Affording someone the graciousness to find out why they oppose you needs far more time spent than social media and cable news are willing to provide.

My feeling is of the most dangerous myths; the idea of everyone with differing views being stupid or crazy is at the top. Even when it comes to genocidal maniacs, being evil is very different from being daft. A belief that something could never happen here and now, because people are different than bygone eras, is a thought often held by those in eras before the body count rose. Many people dismissed Hitler as someone who couldn't possibly be taken seriously; that was before the Holocaust.

Now we are over-correcting, invoking Hitler comparisons too early and too often as a sort of "we don't negotiate with terrorists" strategy to avoid examining uncomfortable arguments. Collectively we’ve become the boy who cried wolf, with a combination of "this is self evident," "reasonable minds cannot dispute," and by comparing everyone to evil dictators who must be ignored.