Delving into Midwood and Marine Park in southern Brooklyn. 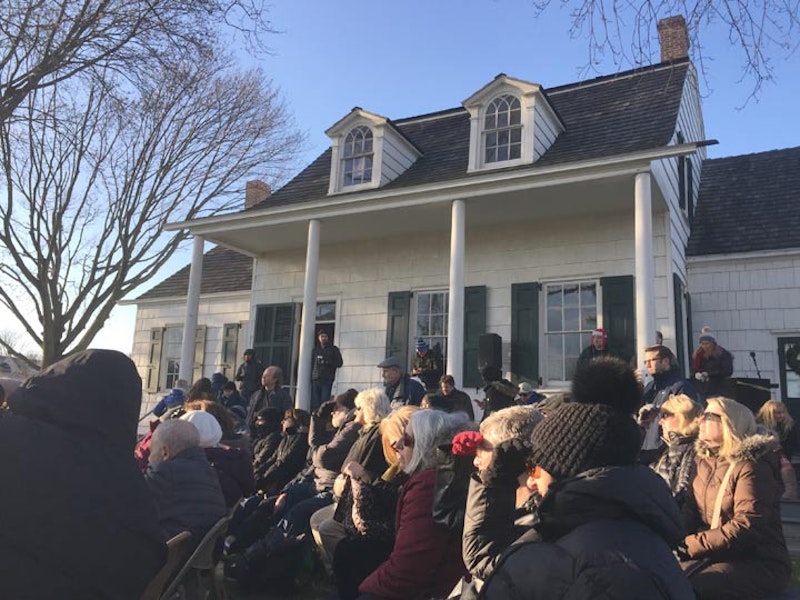 I had the occasion to delve into the wilderness of southern Brooklyn recently, into Midwood and Marine Park, a realm I used to invade frequently on bike rides from Bay Ridge. Passage was relatively simple because the subway and elevated lines plumbing the district are now running both south and northbound again; service each way was impossible for a few years due to extensive renovations underway on F, D and Q stations that took place over the past decade.

I chose the F and got off at Kings Highway, the mother road of Brooklyn, the road named for its borough that is in turn named for King Charles II of England, one of the only relics of British nomenclature remaining in New York City. At the easternmost district of the busy Kings Highway shopping strip at Ocean Ave., Kings Highway assumes some of Ave. P’s busy traffic and expands into an eight-lane behemoth along which trucks and buses rumble along before halting at the elevated train at E. 98th St. in Brownsville, its traffic then distributed to Howard Ave. and Tapscott St. The aboriginal Native American trail that became Kings Highway was expanded in the 1920s, at the dawn of the Auto Age. 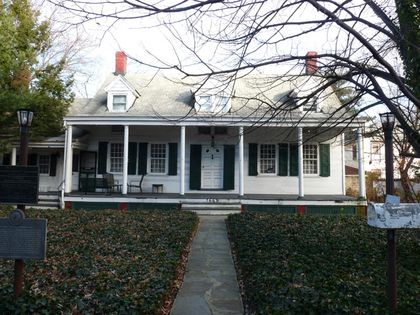 My attention was not directed to Kings Highway today but to a pair of colonial Dutch households that have seen a lot of history. I turned onto Ave. P and at E. 22nd, and saw one of Brooklyn’s most fascinating houses: a well-preserved Dutch homestead. It was constructed by 1766 (the oldest inscription found within bears that date) by Abraham and Henry Wyckoff, descendants of Pieter Claesen Wyckoff, who built the much older Pieter Claesen Wyckoff House on today’s Clarendon Rd. in East Flatbush in 1652. After the Brits took over New Netherland and surrounding territories in 1664, they had no quarrels with the established Dutch settlers, since Stuyvesant surrendered without much fuss when the British armada showed up in the harbor. 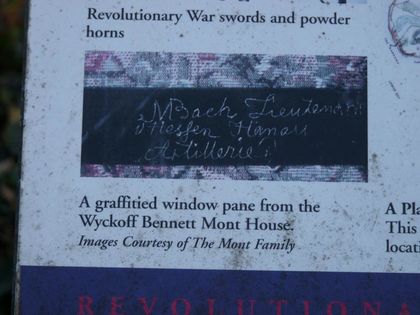 By the 1770s the peaceable era had been long sundered by Colonists’ insistence upon independence and red-coated British troops were marching up Brooklyn’s mother road, which by 1705 has assumed the meet and proper name of the King’s highway, that King being the Restoration monarch Charles II, for whom Kings County was named, and subsequently its Highway. Hessian officers that had occupied the house cavalierly scratched their initials into two windowpanes that have been preserved. In 1835 the house was sold into the Bennett family, which held it until 1983. It remains today as a private residence—it has never become a museum, as did the Claesen Wyckoff house did after it nearly succumbed to the ravages of age and disrepair. It’s in surprisingly good shape except for its picket fence. 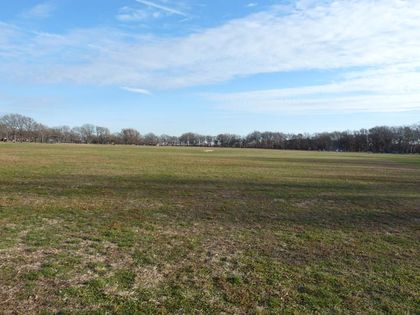 Until a few years ago, the vast, 800-acre Marine Park south of Ave. U was mostly “wilderness,” but trails are now maintained and residents of Gerritsen Beach and the surrounding neighborhood, also called Marine Park, can enjoy a shoreline nature milieu. The park surrounds Gerritsen Creek, an arm of Jamaica Bay. The creek was a freshwater stream that once extended about twice as far inland, all the way up to Kings Highway. The creek had been converted to a storm drain by the early-1920s. The creek’s fresh water, however, supports a wide range of plant and animal life.

Gerritsen Creek was likely a favorite hunting and fishing spot for local native American tribes; evidence of their presence has been found from local archeological digs. When the Dutch arrived in the mid-17th century they found the topography reminiscent of their native Holland; they commenced to farm the land, raise livestock and harvest oysters and shellfish from Jamaica Bay.

A speculative building boom occurred around 1900 when developers expressed interest in turning Jamaica Bay into a deepwater port enabling large ships to enter a proposed harbor. Fearing that the relatively untouched marshland around the edges of the bay would be compromised, local landowners Frederick Pratt and Alfred Treadway White offered 150 acres to the city for use as a park in 1917. Jamaica Bay, however, never became an important port.

Any improvements to the 150-acre tract were slow to occur and it wasn’t until 1937, when land purchases and fill increased the park’s area that the region became an official park and was given its name. Gradual improvements, like baseball fields and recreational facilities were gradually added over the years.

Gerritsen Creek, and nearby Gerritsen Ave., take their names from the Dutch Gerritsen family, who owned property where Marine Park is now as early as the mid-17th century. The family had a milling operation that ran continuously from two buildings in the Marine Park area until 1935, when the second of the two mill buildings burned down... perhaps by arson. Reportedly, it was the largest working grain mill on Long Island.

The mills had wooden machinery, leather beltings and large revolving millstones. They was on the edge of the basin into which poured the sea when the rising tide opened the floodgates of the dam that crossed the narrowest part of the creek (originally Storm Kill, later called Gerritsen's Creek). When the water reached the top of the dam, the gates closed with a full pond behind them. A gate in the sluiceway in the back of the mill could be raised by hand by means of a ratchet wheel, and thus allow the water to flow over the mill wheel as needed.

The second of the two mill buildings was most likely built around 1755. The mills were in continuous operation by the Gerritsens until the late 1890s; William S. Herriman, the last person to run the mill, sold the property in 1899 to former US Navy Secretary William C. Whitney. His son Harry Payne Whitney used the acreage as a training area for his stable of racehorses. Harry’s daughter, Joan, was the original owner of the New York Mets.

These days the old mill is represented only by a group of wooden pilings in the creek, though the mill wheel can also be seen on the western shore of the Marine Park Golf Course. The magnificent Gerritsen family mansion, constructed in 1830 near the mill, was purchased by the Whitneys in 1899 and was in use as a residence during the summer racing season. Stables, barns and servants’ quarters were also built on the property. It was torn down when Marine Park was renovated in the late-1930s.

Over the past 60 years, portions of Marine Park have been improved with recreational facilities, while other areas have been conserved to protect wildlife and plant life. In 1939 the Pratt-White athletic field, north of Ave. U, was dedicated in tribute to the two fathers of Marine Park. A 210-acre golf course opened in 1963. Nature trails established along Gerritsen Creek, on the west side of Burnett Street, in 1984-85, invite parkgoers to observe a wealth of flora and fauna. Ongoing improvements at the end of the 20th century include the reconstruction of basketball, tennis, and bocce courts; of baseball fields; and of Lenape Playground at Avenue U. New ballfields, on the west side of Gerritsen Ave., were opened in 1979 and named for local baseball lover and police officer Rocco Torre (New York Yankees’ manager Joe Torre’s brother, who passed away from a heart attack in 1996). A new Saltwater Marsh nature center opened in 2000. Marine Park boasts regular cricket “tests” on its spacious grounds. Ironically, much of Marine Park’s existing natural quality rests with Parks czar Robert Moses, who resisted calls to overdevelop it. NYC’s largest football stadium, to be named for Notre Dame coach Knute Rockne, was once supposed to rise here. As is, the park’s vast oval lawn stands as a tribute to Rockne, in lieu of a stadium.

In 1974, the Gateway National Recreation Area, a national park, was established. Over 13,000 acres of city parkland in Brooklyn, Queens and Staten Island were transferred to the National Park Service in this major reassignment of jurisdiction over the city's parks, beaches, and wetlands. 1024 acres of the new Gateway National Park came from Marine Park. 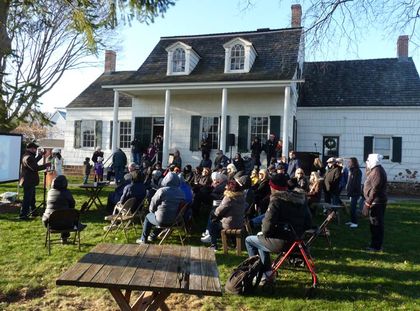 I was in Marine Park, though, to celebrate the 300th birthday of the Hendrick I. Lott House, 1766 E. 36th St. between Fillmore Ave. and Ave. S. A celebration sponsored by the nonprofit Friends of the Lott House vouchsafed me a rare opportunity to see within the house, and there was a special outdoor lecture by Thomas Campanella, author of the recent Brooklyn: The Once and Future City.

Johannes Lott built a small house on his Flatlands property about 1720 on land first settled by Dutchman Hugh Aerens as far back as 1636. In the 1700s, Gerritsen Creek still flowed nearby. Johannes bequeathed the house to his son, also named Johannes, who became a colonel in the Kings County militia and fought in the French and Indian War. His son, Hendrick I. Lott, inherited the small house and farm and built a much larger addition in 1800 for his bride Mary. The house remained in the Lott and Suydam families until 1989, when Ella Suydam, great-great-great-great-granddaughter of Johannes Lott, passed away. The farm was sold off when the city began to lay out streets in Flatlands and subdivide property in the mid-1920s. 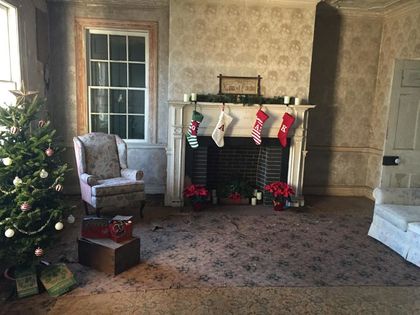 In 2000, a small trap door was discovered in the house in the ceiling of a closet. The trap door led to three worn steps leading to a boarded-up door, and in the two cramped, dusty rooms behind the door, there was an amazing discovery beneath the floorboards: corncobs, a cloth pouch tied with hemp, an animal’s pelvic bone, and an oyster shell. The corncobs were arranged in a specific pattern. It was evidence of African rituals among the Lotts’ slaves. Though records show the Lotts were among Flatlands’ largest slave-owning family, they also show that the Lotts freed their slaves two decades before slavery was outlawed in New York State in 1827. The Lott House may even have been a way station in the Underground Railroad in 1844, though many buildings have made such a claim.