I Nearly Burned Down the Poe House

Maybe we added to Poe’s many mysteries. 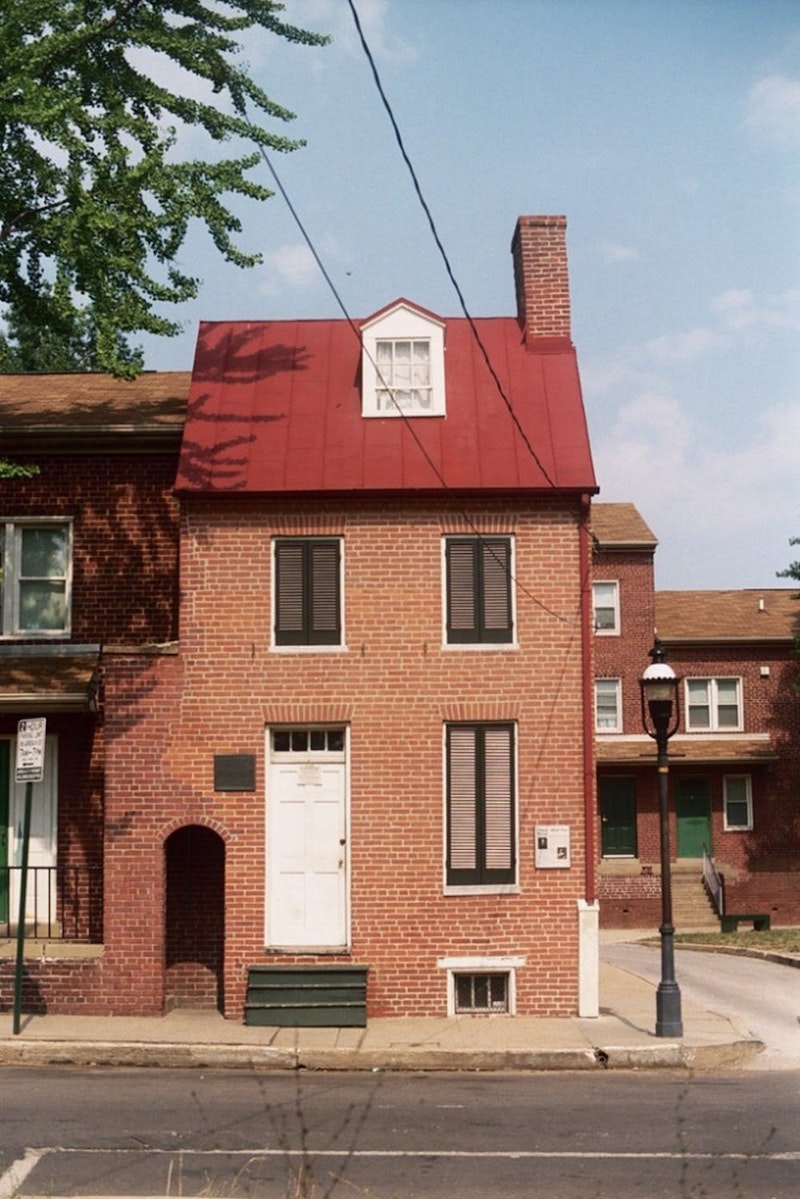 I worked for years on the production staff of numerous films, including stints as a location manager. This is from 1974, in my earliest Baltimore production days, when I was a green horn filming at the historic Edgar Allan Poe House.

Films use locations, because they’re generally cheaper. No sets to build. And, most of the furnishings are already in place. But sometimes the savings aren’t so great, because location filming requires dragging equipment trucks and cars, onto the streets, where unexpected obstacles pop up. Locations can be costly, even more so than using a studio.

Location filming requires coaxing suspicious property owners to allow their places to be used for hectic film work. Common rental locations are homes, schools, shops, churches and museums, and delicate historic sites. Occasionally, an accident damages something on a location. Film crews usually include art departments with good repair skills in painting, carpentry, carpets, and windows, and as experts in illusion, they can usually cover their damages pretty well.

But, film crews can be careless with locations. For them, it’s here today and gone tomorrow, and if they leave a place a little worse for the wear, well, the owners have received a good fee, and the film company will probably be long gone if and when problems are revealed. At first glance, being selected as a location may seem glamorous. Maybe George Clooney will have a cup of tea with you on the back porch, or you can brag to your neighbors that your house was so attractive it was irresistible to moviemaker elites. The glamour won’t last, and in many “hot” location areas, filming has become a nuisance, blocking sidewalks, restricting parking, closing streets, and making loud noise all night long.

Back to 1974. This particular film was about Baltimore’s celebrated 18th century African-American astronomer, Benjamin Banneker. The Poe House on Amity St. was used because it was a perfect period site. Poe lived in a room there; for two years as he bounced between other Poe Houses in Richmond, Philadelphia, and New York. His notorious grave gravesite was actually less than a mile away.

The curator was rightly nervous about our using the site as a filming location, but they needed the location fee to help keep the doors open (the Poe house is in one of Baltimore’s bleakest neighborhoods, and people were afraid to go there. It had been woefully underfunded since its founding as a museum in 1947). The grim-faced curator had specific rules of no food, no drinks, no smoking, which we swore we would follow. Around noon he took his lunch break, and said if we went to lunch, leave someone to guard the place.

After finishing our morning shots, we left for lunch, figuring we’d wrap up when we returned. We forgot to leave a guard, but at least locked the door behind us. A half-hour later, we returned, opened the door, and found the house full of smoke. In a panic, we ran upstairs and saw one of the very hot movie lights had been left on under the lintel of a doorway. The paint was burning off, and charring the wood black.

No water was upstairs, but we’d brought back bottles of soda. We shook them up, and sprayed about a gallon of Pepsi and Sprite on the red-glowing, smoking wood, like fire extinguishers, soaking the area, creating billowing clouds of Pepsi steam to add to the smoke. It doused the fire, but billows of soda steam filled the upstairs. And the floors, walls and ceiling were dripping in gooey boiled soda.

The art crew went into overdrive, bringing buckets of water, sponges, towels and mops, hoping to clean everything up before the curator returned and booted us out. It was amazing how fast the art crew cleaned it up. The only problem left was the charred lintel. It was pitch black and alligatored like a charred log. A crew member appeared with a small can of white paint and covered the still-steaming lintel.

Through the window, I saw the curator walking up the sidewalk. I pulled out my pack of cigarettes, gave one to each crew member, then told them to sit at the bottom of the stairs, smoke up a storm, and sip their sodas—but don’t let the curator upstairs. The curator opened the door and shrieked as the cigarette smoke hit him in the face. He ordered the lounging crew out of the house and dressed them down on the sidewalk. Hadn’t he expressly forbidden smoking and drinking in the house? Were they morons?  Had they no respect for history? On cue, they apologized profusely, and we opened the windows to air the house out. By the time the curator had calmed down, the art department had finished their clean-up, including freshly painting the lintel, still quite warm to the touch. We finished a few more shots, then quickly packed and left.

We never heard back from the curator. In the dim upstairs light, I guess he didn’t notice the damage, though an inch of the doorway had been charred away. I visited the house 20 years later, and was astonished that the doorway was in the same condition as we’d left it.

Maybe we added to Poe’s many mysteries. Future archeologists, scratching away at the old house will perhaps wonder why the top of a doorway, of all things, would suddenly catch fire.  Ghosts? Poe himself, in a moment of madness? Perhaps.