The antibodies are doing the opposite of what they were supposed to. 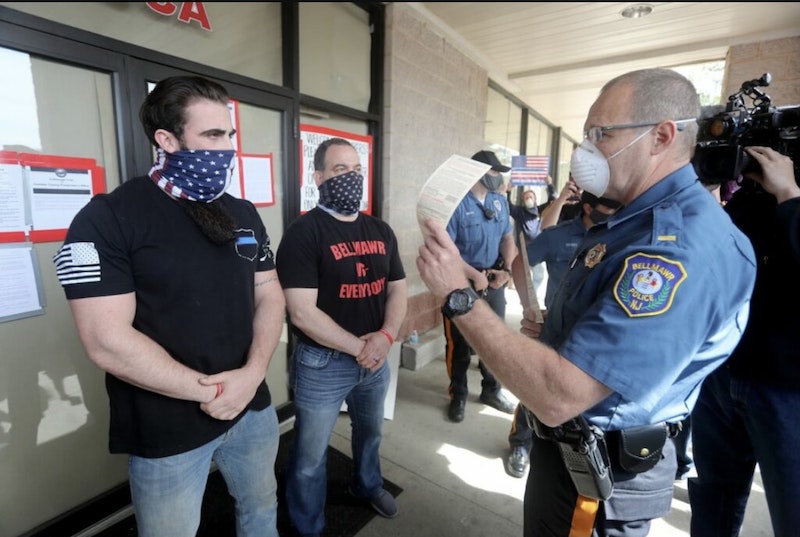 One of my friends (in a group chat filled with people who can’t express their views publicly for fear of being digitally and economically canceled) sent me an Ian Smith tweet, while I was watching a video regarding how the Democrat Governor of New Jersey, Phil Murphy, and his administration were stealing Smith’s money via daily fines for keeping his gym open during The Covid Event.

Smith mentioned that he was fined about $15,000 per day for being open; at some point the state went directly into his bank account to seize his assets.

The Woke Mob and the politicians they support have already illustrated they’re willing to restrict access to resources through cancel culture if they don’t agree with you, so we’ve already crossed that line of financial blackmail in this Cold Civil War.

This is just the next phase, an escalation: unjust lawsuits and fines based on laws that make no sense or jurisdiction, pure discrimination, with the state deciding it can seize your assets.

Smith’s tweet: “Toxic masculinity isn’t strong, masculine men. It is the conniving Betas, submissive simps, and virtue signaling soyjacks. These weak men seek to undermine the value of masculine energy—not because it’s bad, but because they lack the merit to compete among men of value.”

Shortly after, I read the following article by Armando Salguero from Outkick on the insane NFL Covid protocols this year, which essentially make unvaccinated players second class citizens, despite the growing scientific evidence that expresses the lack of efficacy of the vaccine and even the potential danger the vaccine poses.

Dr. Christina Parks spoke in favor of Michigan HB4471, which is a bill that prohibits employers from discriminating against an individual because the individual hasn’t received or declines to receive certain vaccinations; to prohibit retaliation; and to provide remedies.

Parks also states that a recent paper found that the spike protein antibodies the vaccine produces may be making the Delta variant infect cells more easily. Therefore, the antibodies are doing the opposite of what they were supposed to. Something’s going wrong and we’ll eventually find out what.

Alex Berenson was permanently suspended from Twitter for a tweet tweet  iting an Israeli preprint that shows natural immunity to Covid is far superior to the vaccine’s purported benefits. With the Delta strain, vaccinated people were 13 times as likely to be infected and 27 times more likely to have symptomatic infections as a matched cohort that was previously infected.

That number of 79 percent of vaccinated patients with breakthrough infections being symptomatic seems far, far higher than the percent of symptomatic infections in the original virus we were concerned with. This destroys the narrative that the vaccine reduces your symptoms, which is supposed to be the entire benefit.

As my friend Aimee Terese tweeted, “pump Oxycontin into red states for decades, insist it’s safe and incentivize doctors to hand out like candy, watch & ignore the opioid epidemic it causes, then laugh at residents of same states if they die having expressed any skepticism re: an experimental vaccine from big Pharma.”

Did I mention that the woman at the FDA who approved the Pfizer vaccine was the woman who allowed Purdue Pharma to advertise that addiction to their pharmaceutical heroin was rare? Even The Guardian stood up for the families of addicts when Dr. Janet Woodcock was named acting FDA commissioner in January

The simulation is funny sometimes. A lady named Woodcock fucked an entire generation.

Woke culture helps the weak men, but it serves the purpose for the powerful in making it hard to be a strong man and demoralizing the group of people who’d stand up to them if they were able to get the numbers. Think about what opiates did to an entire generation of mostly men who, in many cases, had a pretty good lot and shot in life.

In Salguero’s article, I was most struck by this quote because it speaks to one of the wokest professions in all of America: sports media.

“The league and NFL Players Association have also agreed—with docile compliance from the Pro Football Writers Association—that unvaccinated reporters have to wear masks outside when they are on club facility grounds, cannot participate in press conferences, cannot enter press boxes and cannot ask questions on Zoom calls. Even if they are on a laptop hundreds of miles away. Vaccinated journalists, after testing negative once every two weeks, are not subject to the handicaps—even if they spend the night before in a packed bar, or at a concert, or sitting elbow-to-elbow on a plane full of strangers.”

As “Benedict Cryptofash” says on Twitter, it’s become obvious that the vaccine isn’t about science, but merely about signaling that you are going along with the narrative:

“Call vaccine mandates what they really are: leftism mandates. Last year, you merely had to affirm Black Lives Matter. This year, you have to receive an experimental injection. Increasingly, you must prove you are a leftist in order to exist.”

You can’t be both thoughtful and still be going along with the Covid Event like it’s not an obviously discriminatory power grab. That would be incongruous. Think about this: We’re apparently in a global pandemic, but professions like teaching and nursing are under threat.

Logically, we can’t both be in a pandemic and be capable of firing nurses based on unproven science. What we’re watching as we see people call for vaccine mandates is the process of cancel culture leaving the online world and become planted in the real world.

People are being put in a position with their employment, where those in power positions can force them to oblige their nonsensical politics or be fired. And, with the fact that you’ll have been warned that you need to get the vaccine as a condition of your employment, that warning may mean that those who don’t comply won’t qualify for the unemployment insurance they’ve been dutifully paying against their will as taxpayers.

This is a demonstrably anti-worker movement being pushed by people who pretend to care about the little guy.