The Aesthetics of Woo Woo

My paranoid thoughts continue, privately I hope, in the safety of my head. 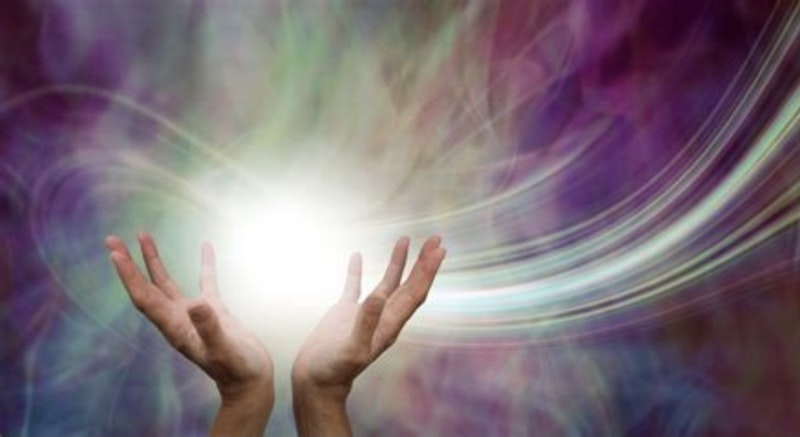 The US is investing more money than ever in alternative medicine research. I spoke to a self-described psychic to try to understand. Beaming in from Birmingham, Alabama is Julie Ryan. Julie’s gracious and hospitable as she chats from her home office, but I have a nagging feeling. I’m worried that beneath our surface conversation there’s a subtext of sizing-upgoing on—that her mind’s eye is scanning me for clues. I’m sat in shot on this transatlantic Zoom call, after all, plonked before the headlights of my webcam. But I admit the concern and she bats it away: “That would be unethical to me, to go in and just try and read your mind.”

After the interview, I receive an email from Julie asking for my address. She’s taken the trouble of international postage to send—not the black spot of the alternative medicine cabal, nomasonic warning-off, but a thank you note and business card. The emblem of professionalism from a self-described psychic and medical intuitive is confusing. It’s a reminder that the cultural and government situation in the United States enables such methods to form the basis of a viable career—simply through an implicit signalling of credibility, all regulatory matters notwithstanding. On the cultural side, for example, consider Gov. Spencer Cox’s appeal to the people of Utah, back in June, to pray for rain as a solution to the region’s ongoing drought. This was followed by an official signed declaration proclaiming a “Weekend of Prayer in Utah”.

On the government side, consider that the 2020 fiscal year holds the odd double-record of largest ever budget deficit—due to COVID-19, an epidemic demanding highly technical solutions from conventional medicine—and largest ever appropriation of funds by the National Institute for Complementary and Integrative Health, which funds alternative medicine research. The body is the black sheep among the National Institutes of Health. It has invested millions of dollars in unlikely research including Reiki healing for HIV/AIDS and expressive writing to mitigate diabetes symptoms. The Skeptical Enquirer’s 2012 investigation, into what was then called the National Institute for Complementary and Alternative Medicine, includes a telling anecdote: $315,000 awarded to private alternative medicine university Bastyr to test whether “a conscious state could exert biological effects at a distance.” This is more or less the power claimed by medical intuitives. Julie’s website, for example, states that she can “sense what medical conditions and illnesses a person has,” in order to then remotely “facilitate energetic healings” for these ailments. (Note that Gov. Cox is essentially implying that “a conscious state could exert meteorological effects at a distance.”)

Perhaps prompted by challenges like the Skeptical Enquirer’s, the NCCIH has since rebranded itself in both name and purpose. It has dropped the “alternative medicine” label and replaced that with “integrative health.” Its 2021-25 plan announces a commitment to “determine, through rigorous scientific investigation, the fundamental science, usefulness, and safety of complementary and integrative health approaches and their roles in improving health and health care.” The plan nevertheless includes questionable ambitions to apply “rigorous fundamental science” to the “human biofield,” i.e. the hypothetical field of frequencies surrounding human bodies which practitioners believe store emotional blockages that can be teased out with the use of tuning forks.

One thing that definitely hasn’t changed is the money pumped in. The relevant appropriation bill, which proposes granting the body $185,295,000 for the 2022 fiscal year, passed the House of Representatives in late-July and was received by the Senate on August 3. If signed into law, this will be the body’s largest ever budget appropriation, topping the current record of $154 million hastily granted via 2021’s omnibus bill. Given the economic climate, it’s a strangely generous budgetary proposal. But into what sort of broader industry landscape would this hefty grant splash?

On April 19th, 1995, three years after the founding of the Office of Alternative Medicine, Julie Ryan casually switched on the news and was struck by footage of the Oklahoma City bombing. Julie claims that she somehow sensed her friend had been injured in the attack—an intuition which would prove to be true. The experience prompted Julie to set up shop as a psychic and medical intuitive. A couple of decades later, and business on a wider scale is booming. The alternative medicine industry was valued globally at $80 billion in 2020, and about 10 percent of this is made up by what Grand View Research calls “external energy,” a category including Reiki and chakra healing and to which Julie’s line of work is at least nominally aligned.

For the industry as a whole, Grand View predicts a compound annual growth rate of 22 percent from 2021 to 2028. Reasons for this growth stampede include the burgeoning medical tourism scene and anticipated demand for alternative treatments of coronavirus and long covid. There’s also increasing investment of taxpayers’ money. An NHS trust in Lincolnshire, UK, hit national headlines in late-2020 when it advertised for a Reiki healer. And the NCCIH has seen its funds increase almost every single year, quite outpacing inflation, since its establishment in 1992 (as the Office of Alternative Medicine), when it appropriated just $2 million.

If Julie’s fanbase is anything to go by, there’s definitely demand, and Julie’s Southern charm does a fine job of working through it. Each week on her show, Ask Julie Ryan, she fields requests from callers in the US, Mexico, and beyond. There are requests to ascertain just what the family dog is really thinking; to energetically heal a sister experiencing acute pregnancy pains; to consult spirit guides on whether a particular career path is the right one. To address the medical issues, Julie employs her alleged ability to visualize energy distributions in a person’s body that amass, in a kind of “x marks the spot” tell, at health-threatening sites like damaged tissue. Julie then either performs a healing herself, by willing a change in the body’s energy, or recommends medical advice based on her conclusions. It’s from this part of her work that the title “medical intuitive,”emblazoned on her business card, comes.

Julie’s background is as a businesswoman, and she holds patents for numerous surgical devices including (per Justia.com) tools for liquid collection and blood and gas transfer. Motifs from this surgical history crop up in her energy healing visualizations, which she commentates in real-time as she experiences them on her show. She tells me that she sometimes sees clients undergoing surgery in her mind’s eye. Her surgical visions may even feature “methodologies and devices that haven’t been invented yet”—a surrealist avowal, redolent of dream states, which tempts one to think that Julie’s inventive imagination (demonstrated by her patents) impacts on her psychic imagination, too.

Listening along to the wave of callers on Ask Julie Ryan is a sobering experience for a skeptic, because it’s evident that these people really believe. In taking stock of this milieu, one becomes aware of the sheer size of the community of psychic practitioners and consumers today. On TikTok, the hashtag #energyhealing has more than 180 million views. The results page is a cascade of short clips claiming to enact energy interventions of various kinds. There’s a “positive energy cleanse” video, which instructs the viewer to listen to the played frequency two-three times to cleanse negative energy and restore DNA (384,000 likes); a “Making You Irresistible To Them” video, in which a woman performs choreographed Reiki hand movements and mutters along in communion with the act (1.1 million likes); and a tutorial on how to feel energy through your hands, for the sake of using it to heal others (619,000 likes).

In its frequent emphasis on emotional wellbeing, as in the positive energy cleanse, alternative medicine provides placebic relief from the stresses of modern life. It’s also aesthetically pleasing, from the gothic paraphernalia of candles and incense to the sleek, bougie products flogged by Gwyneth Paltrow’s Goop. Something perhaps less appreciated is alternative medicine’s characteristic messaging around spiritual dignity. Listening to the conversations on Ask Julie Ryan, it’s hard not to feel that Julie plays the maîtresse de cérémonie of a very particular kind of support group, just as much as she plays her titular role of psychic and medical intuitive. Callers often mention how much her show reassures them and lifts their mood, and she dispenses a kind of spiritual equivalent to careers advice, focused around meaning and purpose: to a Bay Area caller on whether she’s on the right path, Julie avers that “we can never get anything wrong because we always can make decisions out of where we are at any moment.”

The primacy of comfort comes to the fore in a particular Ask Julie Ryan episode, when Julie speaks with Chris Kerr, Chief Medical Officer at Hospice & Palliative Care Buffalo. The cameo is prompted by Kerr and his team’s research and findings on end-of-life experiences for hospice patients: dreams and visions undergone by the dying. Based on the Buffalo sample, 88.1 percent of patients reported having at least one end-of-life experience (ELE); 99 percent of those experiencing reported their ELE as seeming, or feeling, real. The ELEs “commonly featured deceased loved ones,” and themes of “travel/preparing to go somewhere.”

The conclusions for the Buffalo team are pragmatic: don’t, for example, confuse ELEs with delirium episodes requiring medication, as you risk depriving the patient of an experience which, because it soothes them and their loved ones, is legitimate. For Julie, the reports of vivid sightings of loved ones and religious figures in near-death states corroborates her own intuitions on the end-of-life process: that the dead are chaperoned to heaven by “angelic attendants” where they are reunited with their family, friends and pets. “I love it when science catches up with woo-woo,” she says to me, recounting a remark originally made to Kerr. Science has tried to catch up with woo-woo for centuries, mostly in order to shoot a bullet straight through its wishy-washy heart. But if the market forecasts, government funding, and widespread popularity are anything to go by, it looks like woo-woo is getting away.