A backhoe was needed to lift a dead 400-pound grouper out of the water. 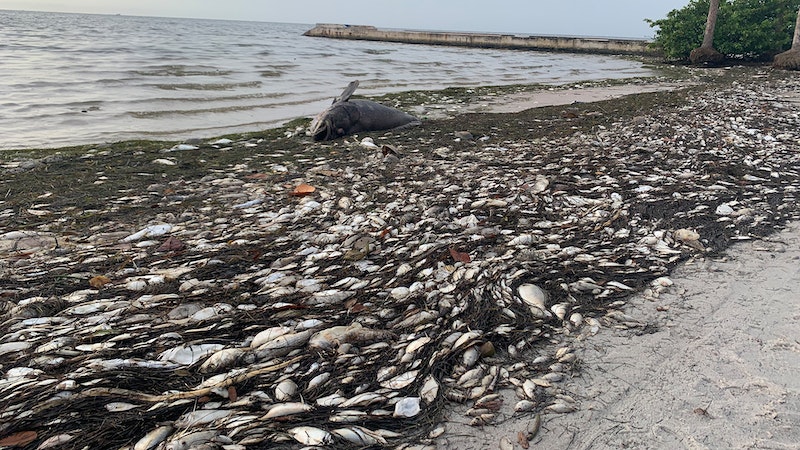 Down in South Florida, there's a bridge I cross twice a day. In the last few weeks, for the first time, I've seen dead fish on it. The only theory that I can come up with is that birds are picking up fish that’ve washed to shore after killed by the toxic "red tide" that's upon us and dropping them on the bridge, perhaps after realizing that they're not fresh.

Dead fish, dolphins, turtles, and manatees have rotted on the shorelines in pools of reddish-brown water. It's a depressing sight. The city council in St. Petersburg has called for a state of emergency to coordinate a state and federal response, but Gov. Ron DeSantis is afraid it will choke off tourist dollars. Like COVID, the red tide has become a political football, with each side accusing the opposition of politicizing the issue. The stench (mostly a rotting fish smell) of this sea plague has made its way into the downtown areas of some cities. Some people say they can feel it in their throat.

Red tide, in Florida, is caused by an elevated concentration (the so-called "algal bloom") of a microscopic plantlike organism called "karenia brevis." Besides killing marine life, it can cause shellfish poisoning if you eat the wrong thing. I don't go to the beach in the summer months, as it's too hot in the sun and there's no shade, but locals have told me people—probably tourists—are still swimming there.

The red tide's not confined to the water—the algae produces airborne chemicals, released by the motion of waves, that can cause people to cough, sneeze and tear up up to three miles inland. Those with respiratory problems can have severe complications, but it affects everyone differently. I'm lucky to have felt no symptoms so far.

The beach I frequent in the cooler months now has a swimming advisory due to a spike in bacterial concentration in the water, the product of decaying algae and fish, that can make people sick. Some have told me they've seen machines going up and down the beach, picking up the dead fish. Some crews pick up the carnage manually, using rakes.

Red tide occurs when large amounts of nutrients are found in the water. Fertilizer and mining runoff, which provide such nutrients, are big contributors to the size of this outbreak. There's plenty of fertilizer used in Florida's many golf courses and lawns, and too much of it makes its way into the water. There's speculation that a breach at the abandoned Piney Point fertilizer plant in April that saw tens of millions of gallons of toxic discharge pumped into Tampa Bay may be exacerbating the current red tide outbreak. Piney Point has a long history of polluting the water and air around it, but there's no scientific consensus linking it with this iteration of the red tide.

Environmentalists believe there's a link, while Republicans, including DeSantis, deny it. However, the waste from more than three decades of phosphate mining still sits in massive piles at the site—a ticking time bomb that a major storm could release into the bay.

It's worrisome that the current red tide's happening just three years after one of the worst ever, but scientists say there's no evidence to suggest they're now occurring with greater frequency. Records of red tides date back hundreds of years, and there's still no consensus that their severity has increased.

Waterfront restaurants are hit particularly hard by the toxic algal bloom, as the smell of rotting fish doesn't put people in the mood for a seafood dinner. Restaurants in this state are already being hit hard by an inability to find staff. A place I go to regularly just decided to close on Mondays because all of its employees were working double shifts every day of the week, and they needed at least one day off. This is the "off-season" here, so I'm curious as to what restaurants will do during the hectic winter months.

I've put my fishing time on hold. The last time I went to my main fishing spot, on the Intracoastal Waterway, it stunk. I'll probably pick up my pole again in October, when it's cooler and the fishing gets better. For a number of reasons beyond the red tide, summer is the worst season in Florida. I'll spend most of the rest of it indoors, but once it cools down and stops raining, I'll be outdoors as much as possible. I'm hoping this sea scourge will be long gone by then.