A challenging environment’s air of mystery is threatened. 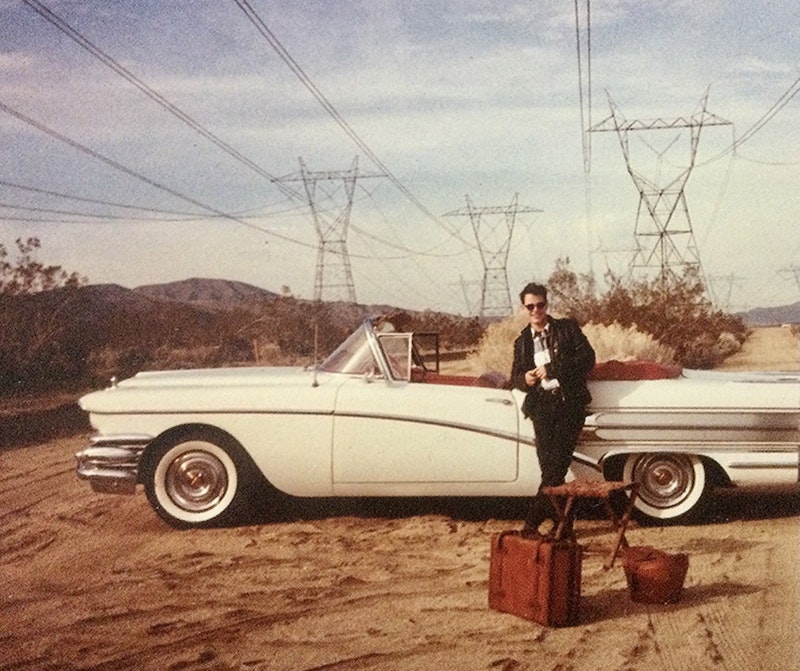 The author in Antelope Valley

Southern California’s desert is a harsh, yet fragile and transcendent landscape that exemplifies nature at its most extreme. This vast landscape of mountain ranges, dunes and big rocks, as clichéd as it sounds “looks like another planet.” Other times it appears very Western, like the Bonanza TV series setting. People come here to enjoy nature, learn to fly military aircraft and dump dead bodies down abandoned mine shafts.

On a crackled, sunbaked dry lakebed in the blinding afternoon light, it’s easy to count the crow’s feet around my eyes. I’m peeking out from behind a pair of Ray-Bans while assisting a fashion photo shoot. I’m trying to hold up a collapsible circular reflector, it’s scorching hot, and I’m soaked in sweat. The playa holds dark secrets, as out of the corner of my eye I notice a bleached, animal skull nearby.

That remarkable setting can bear witness to life’s existence and reminds us of who we are. Today, part of the world’s imbalance with nature is due to the climate crisis. Basic problems exist in the desert; weather, humans and fire are big threats. But the region’s allure has its own set of challenges; before you’re off to explore an oasis, make sure you know where to go and how to get back, because it’s easy to get lost.

One of my desert experiences after a respectful, environmentally-friendly photo shoot in Joshua Tree National Park was petrifying. A zealous German photographer driving a Mercedes thought he was on the Autobahn. I held on for dear life going in and out of traffic along I-10 as my Kraftwerk “We drive on the motorway” ordeal wore on. The nerve-wracking express back to LA took under three hours.

For hundreds of years, people have traveled the region and stories are told. They came on horses, on Borax 20-Mule-Teams with seven-foot wooden wagon wheels, (according to records not a single animal was lost) and in buses, cars and RVs. Their reasons varied: some had hard work to do, others searched for spiritual freedom. Some came to reinvent themselves and others to hide out. They traveled to visit the spirits of our cultural heroes, devils and saints: paying homage to Gram Parsons’ soul in Joshua Tree or dropping hallucinogenic substances with hopes of seeing Jim Morrison hitchhiking.

Maybe there was a celluloid dream to fulfill: a dip in the swimming pool featured in Bruno Dumont’s Twentynine Palms motel or visiting Death Valley’s badlands at Zabriskie Point, the Michelangelo Antonioni film. And others just wanted to be outside at night looking at the Milky Way above nestled in the vast curve of the solar system while coyotes howl under a full moon.

This deceiving barren land of jackrabbits with very little water is located along the Mojave segment on the San Andres fault that runs through California to the Salton Sea. It’s a very large area where big earthquakes are predicated.

One day in West Hollywood during the 1980s, I grabbed the wheel of 1966 two-door, bubble-back Plymouth Barracuda Classic, it’s the one I learned drive on. The Barracuda was Chrysler’s answer to the Mustang; a muscle car that made surfer’s drool, they loved sticking their surfboards in the back ready to go hang 10. The cool car drew a lot of attention. When you pulled into a gas station, grease monkeys immediately ran over to service you. The boys wanted a quick peek under the hood sighing a collective “Woah” as they relished a slant six-cylinder, 145 horsepower engine.

We’re leaving Los Angeles heading East. The Cerulean heaven above hasn’t a cloud in the sky as regional weather reports forecast a hot day. Pedal to the metal, windows rolled down, a spin-out causes a dust devil.

What is it about a place that’s grossly overexposed but still has the magic? On the freeway as you travel through the Cajon Pass, it’s a long way down as a breathtaking, sprawling vista unrolls before your eyes; the rugged landscape fades into the distance stretching from Death Valley into the Mojave Desert.

Excitement grows along the highway as a roadrunner passes by. The high desert can be a no-joke, dangerous place, hence the beauty. There’re cell phone dead zones. Don’t wear flip-flops. It’s easy to die after losing your footing, falling into a steep canyon or pass-out from heat stroke, dehydration or hypothermia due to extreme temperatures. This past July, Death Valley recorded a record breaking 130-degree day.

In the Mojave National Preserve close to the Nevada border is home to the Joshua Tree and a multitude of desert wildlife. Last year in July, a fast-moving 43,273-acre wildfire caused by lightning sparked enhanced “firenadoes.” The blaze ravaged an estimated 1.3 million Joshua Trees in its path along with other cactus, flora and fauna. Adding to the loss is an ominous prediction: by 2070 the iconic, spiny silhouette Joshua Tree will be extinct. Will a U2 album be all that’s left to remind us of what it looked like? Hope still exists for the remaining trees to rebound and thrive.

Just about everything in the desert can hurt you: hello rattlesnakes, scorpions and black widows. It’s their home too and they don’t like to play around. Keep wildlife wild. Brushing against, touching or stepping on a Cholla Cactus is something you “do not” want to do. You’ll pay a heavy price for a thorny situation.

If you choose to live out here, your paroled neighbor may be waiting till you leave to go to store, then they can ransack your home. You’ll probably find them that evening in a local watering haunt, best to buy them a drink if you want to see your stuff again.

The region’s very photogenic, consequently you get over-saturation. Desert locations are commonplace on car commercials, travel websites, Instagram posts and New York Times articles. Years of intense media coverage has resulted in too many visitors. The attention attracts unprepared, naive tourists in droves, which in turn stresses our national parks.

Even with protection rules in place, rocks are tagged and vandalized. And there’s illegal cactus and plant poaching. We need to share a sense of responsibility outside when dealing with nature. Whatever happened to being a keen observer and “not” hurting yourself in a “look only” situation? It’s beyond me why someone would want to be a “nature abuser” or end up in the hospital or even die for a selfie, while the last word out of their mouth is “Oops.”

I hope prosperity can continue to preserve and protect Southern California’s desert for future generations to enjoy. It’s a wonderful gift of solitude with its air of mystery.