The conservative cry against what is often labeled “revisionist” history is familiar. 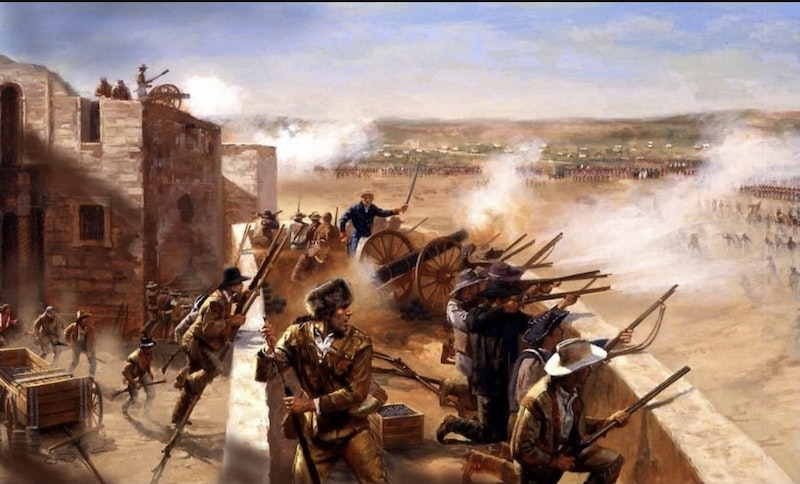 Richard Lowry, Editor-in-Chief of National Review, is unsurprisingly upset over Bryan Burrough’s et al. new book, Forget the Alamo: the Rise and Fall of an American Myth, published this summer.

In a recent Sun Journal op-ed, Lowry takes aim at Burrough’s premise of using historical research to understand a major past event. Rather than recognizing the title as a simple twist on the enduring battle cry, "Remember the Alamo,” Lowry interprets it literally, fearing that the authors are trying to force social amnesia.

“No one is trying to topple the Alamo yet, but…”, he begins, in an attempt to alarm readers in the op-ed’s first instance of refuting a straw man argument that’s not being made. The Alamo we are encouraged to forget is not the Spanish mission turned fortress itself, but the myth-making it inspires.

The conservative cry against what is often labeled “revisionist” history is familiar, culminating perhaps most dramatically at the 2017 “Unite the Right” rally in Charlottesville, VA, where multiple far-right groups clashed with protesters in an event largely inspired by the removal of Confederate monuments.

Much of the rancor over monument removal and rewriting of events like the Alamo is that it places a stain on versions of US history where good, honest people fought valiantly against a repressive, tyrannical government.

It’s a convenient framing of history that supports American Exceptionalism—the notion that we’re unlike any other nation state, that ours is a superior government, and that we’re divinely ordained to influence events on the world stage for the benefit of all. This is not only specific to conservatives. Pushback from all sides occurs when disrupting the more palatable stories that explain how the U.S. came to be defined by its current borders. The most ardent refutations, however, are produced by a demographic that favors publications like National Review, a body politic that resists academic or research-based interpretations of U.S. history (or as they might incorrectly call it, “critical race theory”).

Lowry hardly challenges any of the specifics written in the book, but does offer his own version how the battle is traditionally remembered in popular imagination. Essentially, Mexican President Santa Anna wanted to centralize his government and therefore cracked down on regions that existed more or less autonomously, such as the Mexican territory of Tejas.

In the legendary battle, around 150 settlers defended the Alamo valiantly while waiting for reinforcements before being overtaken by Santa Anna’s forces. There are familiar icons like Davy Crockett, Jim Bowie, and William Travis, who drew a line in the sand with his sword (which historical records neither confirm nor deny).

There’s the notion of honor, self-sacrifice, and so forth. The details are, at best, irrelevant, and at worst, propaganda, for they’re not based in fact, but rather in whatever interpretation best suits the current political climate and Lowry’s own agenda.

In the title sequence of the 1960 film, The Alamo, it opens, “They now faced the decision that all men in all times must face… the eternal choice of men… to endure oppression or to resist,” as if it were adapted straight from an Ayn Rand novel.

According to Burrough, the film is “a fount of all the worst Alamo misinformation.” Lowry, who was born a few years after the release, would find inspiration in the film, as the generation that received it and each one afterwards undoubtedly did. YouTube comments for an upload echo his own sentiments in a sea of tired clichés such as, “They don’t make ‘em like they used to,” ostensibly referring to Crockett’s and Bowie’s inflated characters that drivel in exhausting aphorisms.

One comment reads, “Look no further than to those certain people [who] are offended about everything that is American yet live in America, they have no respect for our rich history, generations of people with no idea just how free they are, and it’s a damn shame.” It’s hyperbole worthy of an eye-roll that sounds lifted from one of John Wayne’s lines in the film.

As Burrough describes, what caused the Texian Revolt that induced Mexican troops to storm the Alamo was not Santa Anna’s tyranny, but a deep-seated resentment over chattel slavery and taxation. Mexico, recently liberated from Spanish rule, was having difficulty populating its Northern border and defending against Comanche and Apache raids. To help solve both these issues, they agreed to allow American settlers into the area and establish industry. The Texians, as the early settlers were called, quickly grew, and with them came cotton production using chattel slavery, much to the chagrin of the staunchly abolitionist Mexican government.

Mexico turned a blind eye against the slavery and accommodated the Texians by granting appeals for greater autonomy over the region. Then, centralist reforms from Mexico’s government pulled back this attitude, asking for the settlers to pay taxes that had gone uncollected. The Texians responded by raiding Mexican tax offices and killing soldiers in a revolt that triggered the Texas Revolution.

Burrough illuminates how key figures now embedded in our patriotic lexicon were not the heroes we think they were. Davy Crockett, for example, was trying to revive a slumbering political career by moving to Tejas, not march into uncharted territory with a grand vision of ideals. Jim Bowie was evading charges for land fraud and had to be resuscitated from a drunken stupor when the revolt came (although, to be fair, this is portrayed in the movie).

What upsets Lowry most of all is not the correcting of history, but that we’re depriving him of his national superheroes. “Of course, such popularizations aren’t going to be academically rigorous,” he concedes, before claiming that the authors “assail” the character of Jim Bowie and other figures. The Mexicans and Comanches were not “paragons” either, he says.

That’s the trouble with shoving a story like the Alamo into the mold of the American creation myth—there always has to be a “good” and a “bad” side, there’s never enough room for the moral ambiguity that history requires.